This variant was first linked to AD in 2013. Since then a number of studies have confirmed an association with risk of AD in European populations. The level of risk is about the same as one copy of the APOE E4 allele. This association has not been found in other populations, including African-Americans and Chinese subjects. In some populations, this variant may also influence the clinical presentation or rate of progression of the disease. Whether the R47H variant is a risk modifier for other neurodegenerative diseases remains uncertain.

In 2013, two groups independently identified this variant as a significant risk modifier for late-onset Alzheimer’s disease. In a discovery series composed of subjects of European or North American descent, one research group found the R47H variant in 22 of 1,091 AD cases and five of 1,105 controls (odds ratio: 4.5; p < 0.001). They then confirmed the association between the R47H variant and AD in a replication series of 1,887 cases and 4,961 controls (odds ratio: 4.59; p = 9.94×10−7). Meta-analysis of the summary statistics of several imputed genome-wide association studies provided further support for this association (Guerreiro et al., 2013).

Simultaneously, another group reported that the R47H variant significantly increased the risk of AD in Icelanders (3,550 AD and 8,888 control subjects over the age of 85; odds ratio: 2.92) and in a replication cohort composed of subjects from Germany, the Netherlands, Norway, and the United States (odds ratio: 2.83; p = 0.002) (Jonsson et al., 2013).

The effect of the R47H variant has also been studied in asymptomatic individuals. Elderly (80–100 years of age) non-demented carriers of the R47H variant exhibited poorer cognitive function than noncarriers (Jonsson et al., 2013). However, there was no significant association between R47H carrier status and cognitive function or decline in a cohort of middle-aged participants in the Wisconsin Registry for Alzheimer’s Prevention (mean age approximately 50 years at baseline, 60 years at follow-up) (Engelman et al., 2014). Within this cohort, R47H carriers were more likely to have a parental history of AD, and families with an R47H carrier had a younger maternal age of symptom onset—on average, almost eight years younger than families who did not carry this variant.

As yet, few imaging studies have examined the effects on brain atrophy of the R47H allele. Volumetric MRI indicated more severe gray-matter loss in the orbitofrontal cortex and anterior cingulate cortex, with relative preservation of parietal lobes, in R47H carriers than in noncarriers among the Spanish AD subjects mentioned above. This finding persisted in a combined analysis of this Spanish cohort and a set of cognitively impaired ADNI subjects (seven MCI R47H carriers, two AD carriers; 20 MCI noncarriers, seven AD noncarriers) (Luis et al., 2014). It has also been reported that SNP rs9394721, a proxy for the R47H variant, is associated with accelerated temporal lobe atrophy and smaller hippocampal volumes in ADNI subjects (100 AD, 7 R47H carriers; 221 MCI, no R47H carriers; 157 healthy controls, no R47H carriers) (Rajagopalan et al., 2013). A second study confirmed the association between rs9394721 and hippocampal volume, but found that this association was significant only in non-demented elderly (Lupton et al., 2016).

A PiB-PET imaging study did not find a significant association of R47H with amyloid deposition (Rosenthal et al., 2015).

In terms of fluid biomarkers, it has been reported that AD and MCI carriers of the R47H variant have elevated levels of CSF tau compared with noncarriers (Lill et al., 2015). In addition, SNP rs9394721 was associated with elevated levels of CSF p-tau181 (Rajagopalan et al., 2013). Levels of soluble TREM2 in CSF were found to be higher in a small group of R47H carriers whose cognitive status ranged from normal (CDR 0) to demented (CDR >1), compared with cognitively normal subjects homozygous for the common TREM2 allele (Piccio et al., 2016).

A significant association between the R47H variant and essential tremor was found in a Spanish cohort, but not in Italian, German, North American, or Taiwanese populations studied by the same group (Ortega-Cubero et al., 2015).

The R47H variant was not found to be associated with Lewy body dementia in Caucasians (Walton et al., 2016).

Published reports to date suggest that AD patients heterozygous for the R47H variant generally display typical AD pathology, but that there may be some subtle differences compared with patients with the common allele.

Autopsy results showed higher neuritic plaque densities in the brains of AD patients carrying the R47H allele compared with those with the common allele (Roussos et al., 2015). Brains from AD patients carrying the R47H variant showed reduced microglial coverage of amyloid plaques and more severe plaque-associated neuritic dystrophy (Yuan et al., 2016), as well as increased accumulation of autophagosomes in microglia, compared with specimens from patients who did not harbor this variant (Ulland et al., 2017). These histological changes are similar to those observed in APP transgenic mice with genetic deletion of TREM2 (Yuan et al., 2016; Ulland et al., 2017). In one study, levels of the microglial marker Iba1 (ionized calcium-binding adapter molecule 1) was found to be decreased in AD, and this decrease was more pronounced in R47H carriers (Korvatska et al., 2015).

Neuropathological findings from one AD patient homozygous for the R47H variant have been described (Slattery et al., 2014). This patient exhibited pronounced frontal atrophy, like that seen in Nasu-Hakola disease (NHD), but not the white-matter abnormalities typical of NHD.

Transgenic mice that express human TREM2 in the absence of mouse Trem2 have been created to study the effects of TREM2 variants in vivo. Observations in these animals thus far suggest that the R47H variant leads to partial loss of TREM2 function. Compared to animals expressing the common variant, amyloid plaque-bearing mice (5XFAD) that express R47H TREM2 have fewer plaque-associated microglia, express fewer TREM2-dependent activation markers, and show less binding of sTREM2 to neurons and amyloid plaques (Song et al., 2018).

Multiple mouse models also have been created in which the R47H point mutation was knocked into the endogenous mouse Trem2 gene (R47H KI (Haass), R47H KI (JAX), R47H KI (Lamb/Landreth)).  In all of these models, introduction of the R47H mutation resulted in decreased expression of Trem2 (Cheng-Hathaway et al., 2018; Xiang et al., 2018). Lower Trem2 expression in R47H knock-in mice has been traced to aberrant splicing of the mutant allele, which introduces a premature stop codon and could promote nonsense-mediated decay (Xiang et al., 2018). The R47H mutation does not, however, induce mis-splicing or reduce expression of human TREM2 (Xiang et al., 2018; for discussion on extrapolating findings from R47H knock-in mice to humans, see Sept 2018 news). 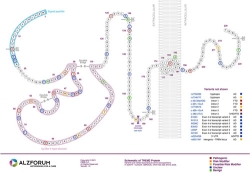