Rare mutations in a microglial receptor contribute as much to Alzheimer’s risk as does the more common ApoE4 genotype, according to back-to-back papers in the November 14 New England Journal of Medicine online. Variants in the triggering receptor expressed on myeloid cells 2 (TREM2) approximately triple one’s risk of developing AD, both sets of authors report. In the brain, TREM2 seems important for microglial signaling. “It firmly puts the microglial response center stage,” said John Hardy of University College London, U.K. Hardy led The Alzheimer Genetic Analysis Group that conducted one of the studies. The other comes from deCODE Genetics in Reykjavik, Iceland, which has mined that country’s genealogical records and genomes to discover genes linked to disease. This study represents the second big Alzheimer’s find for deCODE this year: They also reported, in July, a protective amyloid precursor protein variant (see ARF related news story on Jonsson et al., 2012).

TREM2 straddles the membrane of many immune cell types, including macrophages, dendritic cells, osteoclasts, and microglia (the last two are the resident immune cells of bone and brain, respectively). Researchers know little about its ligands, but have determined that it partners with the adapter protein DAP12 (DNAX activating protein of 12 kilodaltons) to drive downstream signaling. Its few known roles include regulating inflammation and phagocytosis (Takahashi et al., 2005; Hamerman et al., 2006).

Homozygous mutations in either TREM2 or DAP12 result in Nasu-Hakola disease, which manifests as a combination of bone cysts and dementia (Paloneva et al., 2002). Recently, Hardy and colleagues discovered that some of the same TREM2 homozygous mutations produce frontotemporal dementia without the bone disease (see ARF related news story on Guerreiro et al., 2012). Now, they report that carrying a just a single TREM2 mutation predisposes one to AD as well.

All Signs Point to TREM2
The FTD finding led Hardy and colleagues to look for TREM2 variants in other genome and exome sequences the geneticists have collected, in case the mutations might show up in Alzheimer’s. They also asked collaborators Alison Goate and Carlos Cruchaga at Washington University in St. Louis, Missouri, to check their collection. Between the two groups, the scientists examined 1,092 sequences from people with AD and 1,107 from control cases. People with Alzheimer’s were particularly likely to carry one of several rare TREM2 variants. An arginine-to-histidine substitution at amino acid 47 (R47H) led the pack with the strongest association with AD; other variants were even rarer and thus harder to link to disease, Hardy told Alzforum.

To confirm the AD association, the researchers checked a meta-analysis of three genomewide association studies. Again, R47H showed up more often in cases than controls. Finally, Rosa Rademakers and collaborators at the Mayo Clinic in Jacksonville, Florida, genotyped the R47 locus in a further 1,134 AD cases and 2,834 controls, clinching the relationship between the mutation and disease.

The deCODE team, led by first author Thorlakur Jonsson and senior author Kari Stefansson, came upon the same mutation by slightly different methods. deCODE has sequenced the genomes of 2,261 Icelanders, and developed a list of variants likely to interfere with protein function. They can then examine these variants in different populations to find genes that affect complex phenotypes.

At the start, Stefansson and colleagues were not looking specifically for Alzheimer’s risk genes, but for variants that affect when people require nursing home care, he told Alzforum. They compared genetic markers in people who moved into a home by the age of 75 to those in folks still independent at 85. The R47H substitution in TREM2 appeared to influence the chances a person would enter a nursing home. Looking more closely at 3,550 people with AD and 1,236 elderly controls, the researchers determined that Alzheimer’s explained the nursing home pattern. They also found that elderly carriers of the TREM2 variant who did not exhibit AD nonetheless performed worse in cognitive tests than non-carriers. The deCODE group also genotyped separate sample sets from the United States, Germany, and the Netherlands to confirm the association with AD. In Iceland, the R47H variant appeared at a frequency of 0.63 percent, deCODE reported. "The variant is much more common than those found in APP and presenilin, and it is much rarer than ApoE4, but it has an effect size the same as ApoE4 or perhaps a bit stronger," said Hardy.

Lars Bertram of the Max-Planck Institute for Molecular Genetics in Berlin, Germany, was pleased to see that the advanced genetic technology applied by the groups yielded results. However, he confessed he was underwhelmed at the impact of TREM2 on the general population. Many risk factors in the AlzGene database explain more cases, he noted. Because the variant is so rare, he said, it is difficult to estimate its effect. Its influence on Alzheimer’s risk may be lower than that calculated in the papers, Bertram speculated.

Mechanism Points to Microglia
Despite their rarity, the TREM2 variants offer clues about AD pathology. “This finding points a big red arrow at microglia,” said Richard Ransohoff of the Cleveland Clinic in Ohio, who was not involved in either study (see image below). Just like the discovery of amyloid precursor protein mutations shored up the amyloid hypothesis, the TREM2 mutations support a role for neuroinflammation in Alzheimer’s. “It is the strongest evidence we have that inflammation is integral to the AD disease process,” Ransohoff said. Hardy hypothesized that TREM2 dampens microglial activation, and that the mutation results in runaway inflammation. He added that TREM2 mutations probably do not directly cause Alzheimer’s, but instead result in a state in which the brain cannot effectively combat the pathology initiated by some other cause. 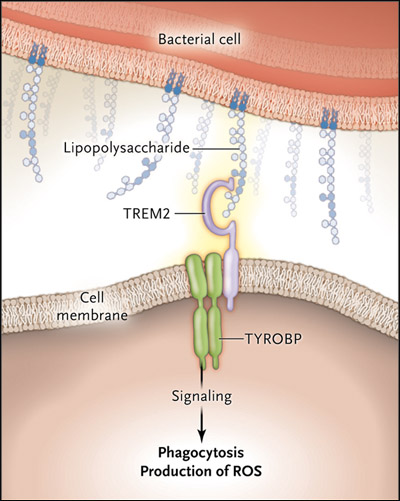 The microglial receptor TREM2 is now linked to Alzheimer's disease. One of its functions is to activate phagocytosis, shown here in response to the lipopolysaccharide on a bacterial invader. Image courtesy of New England Journal of Medicine © 2012

Hardy’s idea is one among many possibilities. The AD link could also have to do with the receptor’s role in promoting microglial survival, suggested Marco Colonna of Washington University in St. Louis, Missouri. Colonna was not involved in the studies but originally cloned the TREM2 gene (Bouchon et al., 2000). In mice, he has found that loss of either TREM2 or DAP12 results in the disappearance of microglia as the animals age (Otero et al., 2009). “My suspicion would be that people who are heterozygous for the TREM2 variant will probably have defective microglia function or survival, and that will ultimately result in increased susceptibility to neurodegeneration,” he said.

Or might it be that TREM2 affects AD pathology via phagocytosis? Microglia swallow debris and apoptotic cells, and participate in synapse remodeling (see ARF related news story on Tremblay et al., 2010). The mutations might contribute to disease by inappropriately promoting or blocking the phagocytosis of synapses, speculated Mariko Bennett of Stanford University in Palo Alto, California. “One possibility is that this mutation unleashes the cells to the extent that they will attack normal tissue as well as debris,” Stefansson added.

Microglia also gobble up amyloid (Lee and Landreth, 2010), and TREM2-expressing microglia hover at the edges of plaques in AD model mice (Frank et al., 2008). That might hint that TREM2-deficient microglia in R47H carriers might fail to clean up amyloid. The authors of an editorial accompanying the Journal papers disagree. Because people with Nasu-Hakola disease do not develop amyloid plaques, TREM2 mutations probably do not affect amyloid clearance, wrote Harald Neumann of the University of Bonn, Germany, and Mark Daly of Massachusetts General Hospital in Boston.

TREM2 is so poorly understood that it is too early to say how it might contribute to disease, Ransohoff said.

TREM2 agonists might make a good therapeutic, Hardy and Stefansson agreed, by ramping up the activity of the normal TREM2 protein present in heterozygotes. Medicines that modulate inflammation also hold promise, Ransohoff said.

As they continue to sift genotypes, researchers will likely find more rare variants with strong effects, Ransohoff predicted. DAP12, TREM2’s partner, would be a good place to look, Colonna suggested. Both Hardy and Stefansson have checked DAP12, with no hits thus far.—Amber Dance