About one-third of the more than 30 genes linked to ALS affect RNA metabolism, either directly or indirectly, said Robert Brown of the University of Massachusetts Medical School in Worcester, who opened the conference with an overview of genetics. Many attendees were excited about recent results in the study of the C9ORF72 gene. C9ORF72 hexanucleotide repeat expansions are the most common cause of familial ALS and frontotemporal dementia. Scientists discussed how the repeat size correlates with disease presentation, various up-and-coming animal models, and potential treatment strategies. Antisense oligonucleotides were recently tested in disease models as one possible treatment strategy (see Oct 2013 news story; news story). Christopher Pearson of The Hospital for Sick Children in Toronto suggested another, based on destabilizing G-quadruplex structures that the repeat likely assumes.

Pearson and others noted that ALS and FTD researchers benefit from previous studies of more than 40 other nucleotide repeat disorders, such as myotonic dystrophy, from which they can mine hypotheses and techniques. For example, repeat associated non-ATG (RAN) translation, identified for C9ORF72 earlier this year, was found first in other diseases (see Feb 2013 news story, news story). Laura Ranum of the University of Florida in Gainesville, who originally described this unusual translation, welcomed C9ORF72 researchers to the fold (Zu et al., 2011). “The RAN translation field has been pretty lonely,” she said.

A Stable Shape for C9ORF72 RNA Foci?
Scientists have established that C9ORF72 forms stable RNA foci, with aggregates forming out of RNA in both the sense and antisense direction (see Nov 2013 news story). How might the GGGGCC repeats tangle together? Pearson presented results, released over the last year by his group and others, that suggest the sense RNA forms a stable structure called a G-quadruplex (see Sep 2012 news story, Reddy et al., 2013, Fratta et al., 2013). 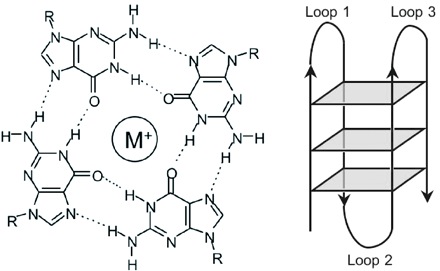 Stabilizing Expansions
G-quadruplexes are formed of stacks of square G-quartets, with guanines at each corner, surrounding a positive ion. The DNA or RNA strands forming the edges can be parallel or antiparallel, as shown here, and come from the same nucleic acid chain (as shown) or multiple chains. Nucleotides that are not guanines hang off the structure in the external loops. [Image courtesy of Julian Huppert, Wikimedia Commons.]

G-quadruplexes form naturally from guanine-rich sequences of single-stranded DNA or RNA. Four guanines interact around a positive ion, making a square called a G-quartet, and these stacked squares make up a quadruplex. An individual nucleic acid strand may form a quadruplex, or multiple strands may come together to create it. G-quadruplexes appear throughout biology. For example, unimolecular G-quadruplexes show up in the single-stranded telomeric DNA at the ends of chromosomes, and in oncogene promoters when they unwind DNA (reviewed in Chen and Yang, 2012). In RNA, G-quadruplexes are common in 5’ untranslated sequences and affect translation (reviewed in Bugaut and Balasubramanian, 2012).

Given the guanine-rich nature of the C9ORF72 repeat sequence, Pearson suspected it might form a G-quadruplex. Using circular dichroism, Kaalak Reddy and colleagues in Pearson's lab showed this was the case for repeats of two to eight GGGGCC sequences in RNA in vitro. The structures formed out of multiple RNAs, with the backbones of the RNA at each corner of the quadruplex lined up in parallel. The G-quadruplexes were highly stable, and did not melt completely even at 95 degrees Celsius.

Researchers suspect that C9ORF72 expanded RNA forms these structures in vivo, though it would be difficult to prove, Pearson told Alzforum. He also found that some RNA-binding proteins, such as hnRNPA1, interact with C9ORF72 quadruplexes in vitro. The antisense version of the expanded RNA (GGCCCC), which researchers recently found transcribed in cells expressing expanded C9ORF72, would be more likely to form a hairpin, he predicted.

Brown said Pearson’s ideas should be tested in cells and animals as soon as possible. However, Pearson was careful to caution that he does not propose TMPyP4 as a treatment for human disease, but rather presents the results as a proof of principle that a small molecule can alter the structure of C9ORF72 RNA foci. For one, he pointed out, researchers are not yet certain if RNA foci are the pathological cause of C9ORF72 disease. For another, TMPyP4 binds several kinds of G-quadruplexes, not just the GGGGCC sequence, and he does not yet know if it binds C9ORF72’s sequence preferentially.

C9ORF72 Genetics
While Pearson worked with a handful of repeats in vitro, in people the expansion can grow to considerable lengths. Marka van Blitterswijk and colleagues in Rosa Rademakers' lab at the Mayo Clinic in Jacksonville, Florida, have characterized the repeat size in different tissues of individuals who carry the expansion. As Rademakers’ lab reported previously, the number of repeats varies widely among expansion carriers and even among tissues within the same person (see Jan 2013 conference story). Van Blitterswijk and colleagues used Southern blots to measure repeat sizes in 84 expansion carriers with FTD, motor neuron disease, or both, as well as some asymptomatic carriers, from a range of tissues including blood, cerebellum, and frontal cortex, as she presented in a poster and Rademakers showed in a slide presentation (see Van Blitterswijk et al., 2013). Overall, the cerebellum tended to have the shortest average repeat length, 1,667, compared with 5,250 in frontal cortex. The expansion size failed to predict whether someone had FTD versus ALS. Blood repeat size, with an average of 2,717, correlated with neither brain repeat length nor disease severity. Pearson said this was disappointing from a clinical point of view, because it precludes predicting disease course with a simple blood test for expansion size. However, blood testing can still identify or exclude someone as an expansion carrier, Van Blitterswijk noted.

Van Blitterswijk and others have reported that C9ORF72 expansion carriers may have second mutations that could contribute to pathology, and perhaps even explain why one carrier gets FTD while another has ALS (see Jan 2013 conference story; Van Blitterswijk et al., 2012; Van Blitterswijk et al., 2013). In San Diego, Rademakers reported genotyping C9ORF72 carriers for a rare variant in the gene TMEM106B, a protective factor against FTD in carriers of progranulin mutations (see Feb 2010 news story; Finch et al., 2011; Aug 2012 news story). Among more than 300 expansion carriers, Van Blitterswijk observed a lower-than-normal frequency of homozygotes for the minor allele, but this pattern occurred only in those with FTD. The protective, minor allele appears to stave off FTD, but not ALS, she suggested.

TMEM106B is the first genetic modifier of C9ORF72 to be identified, Rademakers noted. Brown agreed. “It looks like it is a real modifier,” he said. Van Blitterswijk speculated that because TMEM106B influences lysosome shape and activity, genetic variants might affect degradation and aggregation of TDP-43, which could influence FTD risk.

Animal Models Under Construction
Since the discovery of the C9ORF72 gene’s link to disease in 2011 (see Sep 2011 news story), researchers have started to develop a number of experimental models to study the expansion. Gao, Christopher Donnelly of Johns Hopkins University in Baltimore, and Clotilde Lagier-Tourenne of the University of California, San Diego, described published models of cultured primary fibroblast and induced pluripotent stem cell lines from C9ORF72 expansion carriers (see Almeida et al., 2013). In San Diego, researchers reported progress with several new whole-animal models. The creatures are difficult to create, scientists told Alzforum, due to the unstable nature of the repeated sequence.

Brian Freibaum of St. Jude and Helene Tran of the University of Massachusetts in Worcester reported introducing C9ORF72 into fruit flies, which have no homolog to the human gene. Freibaum expressed C9ORF72 with eight, 28, and 58 repeats (the cutoff between health and disease appears to be about 30) and looked for RNA aggregates and peptides due to translation of the repeat sequence, both of which are subjects of intensive research. At eight repeats, he saw neither. At 28, he observed RNA foci. At 58, he saw both RNA foci and peptide aggregates. The 28-repeat construct might be “on the cusp” of RAN translation, Freibaum speculated. The longer constructs were toxic when expressed in various fly tissues. For example, flies transcribing C9ORF72 with 28 or 58 repeats in muscle tissue held their wings awkwardly up or down, instead of flat like wild-type animals. 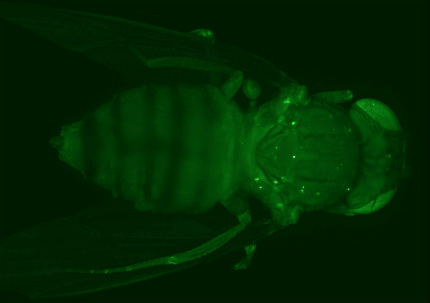 Tran engineered flies with a range of repeat lengths. Those with 160 repeats accumulated RNA aggregates, climbed poorly, and died earlier than flies with only five repeats. Both Tran and Freibaum are conducting screens for genetic suppressors and enhancers of the C9ORF72 phenotype in their models. These screens could identify genes involved in disease progression and potential drug targets, Freibaum told Alzforum. The repeats also caused neurodegeneration in a fly model published earlier this year (see Xu et al., 2013). 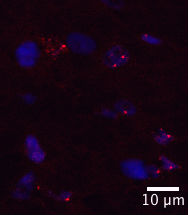 Vertebrate C9ORF72 models are also making headway. Bettina Schmid of the German Center for Neurodegenerative Diseases (DZNE) in Munich presented preliminary results from zebrafish models. Schmid created knockout animals and fish that express two or 80 repeats in the zebrafish homolog of the human gene. Knockout models should help identify the natural function of C9ORF72, which is unknown, Schmid told Alzforum. However, her knockouts had no obvious phenotype. “They swim and grow normally,” Schmid said. Another group recently reported that zebrafish C9ORF72 knockouts swam poorly. The difference could be due to different knockout technology used by the two groups, Schmid speculated (see Ciura et al., 2013). In Schmid’s expansion models, two repeats elicited no RNA foci or peptide aggregates, whereas 80 repeats created both. Schmid says she needs to confirm these preliminary results.

No C9ORF72, No Problem
Motor neuron axon length was the same between wild-type and C9ORF72 knockout zebrafish embryos in these sections stained with an antibody to znp-1. Image courtesy of Alexander Hruscha, German Center for Neurodegenerative Diseases, Munich.

Finally, both Brown and Lagier-Tourenne discussed mouse models. They and several other researchers are part of a large collaboration, working with C9ORF72 bacterial artificial chromosomes provided by the ALS Association. Brown described a mouse engineered to have 600 repeats which has now reached 11 months old and produced three further generations. It has no obvious motor phenotype, he reported. The animals gain weight normally and grip and balance on a rotating rod just like wild-type mice. However, Brown believes the animals will be useful because they accumulate RNA foci and RAN-translated dipeptides, as collaborators in Gao’s lab and Leonard Petrucelli's lab at the Mayo Clinic in Jacksonville have found. Lagier-Tourenne and Don Cleveland at the University of California, San Diego, have created several mouse lines, with repeats ranging from 100 to 450. They plan to test antisense oligonucleotide treatments in those mice.

Brown also reported on a C9ORF72 knockout model created by Kevin Eggan of Harvard University. These mice are about a year old, and the researchers have observed a subtle but progressive loss of motor function, including denervation of muscles, paralysis, and early death. These data support the theory that C9ORF72 disease results from haploinsufficiency of the gene, commented Aaron Gitler of Stanford University in Palo Alto, California. Lucie Bruijn from the ALS Association said that all these models would be useful and complementary.

Future Questions
Researchers at this meeting agreed that they have only started to untangle the effects of C9ORF72 expansions. “Much more needs to be understood at the mechanistic level,” Gao told Alzforum. “We know so little.” Some data support loss of C9ORF72 function as a problem, but what about RNA foci and RAN-translated peptides—“Are they pathogenic, or are they a parlor trick?” asked Brown. He said for now data seem to indicate that silencing C9ORF72 would be beneficial, and Bruijn agreed this would be her priority treatment approach.—Amber Dance