Amyotrophic lateral sclerosis confounds physicians and scientists with its variability, ranging from a pure motor neuron disease to a movement disorder with cognitive symptoms akin to frontotemporal dementia. How can researchers divvy up ALS into subtypes that will help them understand causes and symptoms? Genetics helps, and ALS due to an expansion in the C9ORF72 gene has emerged as a potentially unique form of the disease. In fact, the brains of people with this type of ALS do not look quite like those of other ALS patients, according to a paper in the June 14 Neurology online. Researchers from Trinity College Dublin, Ireland, report that compared to ALS patients with other forms of the disease, those with the expansion showed more frontotemporal degeneration, explaining their higher prevalence of cognitive symptoms. Although unable to identify C9ORF72 cases by itself, magnetic resonance imaging (MRI) might eventually provide a useful diagnostic or prognostic biomarker, said senior author Orla Hardiman.

Few imaging ALS studies have been published since the 2011 discovery of the C9ORF72 expansion in many cases of familial ALS and frontotemporal dementia (FTD; see ARF related news story on Renton et al., 2011, and Dejesus-Hernandez et al., 2011). Previous work focused mainly on FTD, not ALS, and on gray matter degeneration only. In the current paper, Hardiman and first author Peter Bede turned their attention to both gray and white matter deterioration in people with C9ORF72-based ALS.

Hardiman has been tracking ALS cases in Ireland since 1994, and several years ago she and Bede set out to characterize the brain MRIs of a subset of her cohort. By 2011, they had imaged dozens of participants. After genotyping, the scientists grouped them into nine cases with C9ORF72 expansions and 30 without, plus 44 healthy control brains.

Radiologist are unable to distinguish individual C9ORF72 images from non-expansion images. However, when Bede compared the two groups, clear differences emerged. In non-C9ORF72 ALS, the prominent features were white matter deterioration in the corticospinal and cerebellar areas. In contrast, C9ORF72 cases exhibited white or gray matter degeneration in the cortex and subcortex of the frontotemporal lobe, including its fusiform, thalamic, supramarginal, and orbitofrontal sections, as well as Broca’s language center. Both kinds of ALS shared deterioration of the corpus callosum and superior motor tracts, in keeping with motor neuron degeneration (see image below). 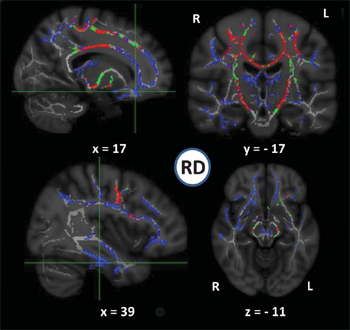 “It supports the conjecture that C9ORF72 [ALS] is a very characteristic subgroup,” said Hardiman. She noted the atrophy mapped to regions in the frontal cortex where pathologists typically observe aggregates of the protein p62 when they autopsy people with C9ORF72 mutations. The atrophy also correlates with the high frequency of cognitive and behavioral symptoms in people with the expansion. For example, 67 percent of repeat carriers showed signs of frontotemporal dementia (FTD), and 22 percent exhibited executive dysfunction. In the C9ORF72-negative group, only 10 percent of participants had dementia, and 6 percent executive difficulties.

Does C9ORF72-based ALS look like FTD on an MRI, then? Not exactly, Hardiman said. The typical FTD cases she has seen showed much greater brain atrophy. Other researchers who previously examined C9ORF72-based FTD reported atrophy in the dorsolateral, medial, orbitofrontal, temporal, parietal, and occipital lobes, as well as the thalamus and cerebellum (Mahoney et al., 2012). However, there are some similarities between the locations of deterioration that Bede observed and the gray matter degeneration in C9ORF72-based FTD, commented Jennifer Whitwell of the Mayo Clinic in Rochester, Minnesota, in an e-mail to Alzforum. Bede observed cortical thinning in posterior regions, including parietal and occipital lobes, which Whitwell also reported in a study of people with C9ORF72-positive FTD. In addition, she noted, both she and Bede observed fairly symmetric degeneration across both sides of the brain (Whitwell et al., 2012).

The imaging data, combined with clinical and pathological reports, suggests that C9ORF72-based ALS represents its own category. Pathologists can often identify a C9ORF72 brain even before the genotyping is done, Hardiman said (see also ARF related news story). She added that she can usually guess what causes ALS just based on clinical symptoms and family history. C9ORF72 ALS tends to start at a younger age and progress rapidly; patients often have dementia or another neurological disease, or a family history of dementia or neurological disease (Byrne et al., 2012; Cooper-Knock et al., 2012). “The whole picture shows that C9ORF72 is different. It is a subgroup that has a characteristic clinical presentation, family history, clinical outcome, imaging, and pathology,” Hardiman said (see also Byrne et al., 2012).

The work has implications for future clinical trials. Given that C9ORF72-based ALS fits in its own box, researchers will need to identify expansion carriers. The authors also suggested that the brain areas they identified could help scientists pick out the right neuropsychological tests for ALS trials. For example, the degeneration of Broca’s area suggests that language might be worth testing. Eventually, scientists may be able to target different treatments to this and other genetic categories of ALS, Hardiman predicted.

Hardiman expects that researchers will learn to identify C9ORF72 cases via imaging. Collaborative groups, such as the NeuroImaging Society in ALS (NISALS) and Sampling and biomarker Optimization and Harmonization in ALS and other motor neuron diseases (SOPHIA), are currently working toward that goal. Eventually, Hardiman envisions uploading a new patient scan to a computer with a large dataset, which will be able to identify carriers from non-carriers (see ARF related news story). While genotyping is sufficient to identify a C9ORF72 case, imaging could help predict the patient’s phenotype and cognitive decline, the authors write.—Amber Dance