Since the identification of the major amyotrophic lateral sclerosis and frontotemporal lobar degeneration gene C9ORF72 more than a year ago, scientists have been hunting for clues as to how it promotes disease. Being an expanded hexanucleotide repeat in an intron, i.e., non-coding region, the genetic defect causing ALS and FTLD should not affect the protein sequence. Ideas have ranged from loss of function due to RNA instability to toxic RNA inclusions. Now, in a big surprise, researchers led by Dieter Edbauer and Christian Haass at Ludwig-Maximilians University, Munich, Germany, report something entirely different. In today’s Science, they show that the expansion, in fact, gets translated. It produces aberrant dipeptide repeat (DPR) proteins. Not only that, but the authors also showed that neuronal inclusions present in mutation carriers contain these DPR proteins. The data help solve the mystery of these enigmatic inclusions and “link the genetic mutation to the predominant pathology,” Edbauer told Alzforum. What remains to be shown is whether these deposits actually drive the disease. Nonetheless, scientists hailed the discovery as a major advance.

“I think this is a great step forward in our understanding of the disease,” said Bryan Traynor at the National Institute on Aging in Bethesda, Maryland. He co-led one of the research groups that initially identified the C9ORF72 mutation, but was not involved in the current study. “It is a very exciting discovery. Of course, like all good science, this finding leads to more questions,” Traynor added. Stuart Pickering-Brown at the University of Manchester, U.K., wrote to Alzforum: “The next step is to clarify if the dipeptides are toxic, or just innocent byproducts of the expansion.”

Strengthening the findings, another group has independently arrived at the same conclusions. Researchers at the Mayo Clinic in Jacksonville, Florida, also found that the mysterious inclusions seen only in C9ORF72 mutation carriers contain DPR proteins made from the hexanucleotide expansion. That work will be published next week.

Joint first authors Kohji Mori and Shih-Ming Weng raised antibodies against the three possible DPRs that would be produced from the hexanucleotide expansion if it was translated in any of the three reading frames: glycine-alanine, glycine-proline, and glycine-arginine repeats. The authors detected all three DPRs in cerebellar extracts from postmortem brains of C9ORF72 mutation carriers, but none in brain samples taken from healthy controls or people with other forms of FTLD/ALS. The authors found poly-glycine-alanine to be the most abundant of the DPR proteins, although all three were present. Likewise, in brain slices from mutation carriers the antibodies labeled star-shaped cytoplasmic inclusions and a few dot-like intranuclear inclusions found in neurons (see image below). 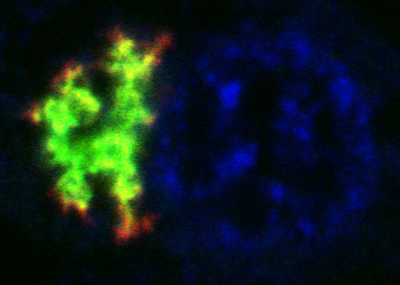 DPR Proteins in Disease
Poly GA (red) co-localizes with p62 (green) in star-like inclusions in the hippocampus of a C9ORF72 mutation carrier. Image courtesy of Kohji Mori and Dieter Edbauer

Similar inclusions have previously been shown to be positive for the signaling protein p62 and negative for TDP-43, one of the primary pathological proteins in FTLD and ALS. The deposits occur in neurons of the hippocampus, cerebellum, and neocortex in people with the C9ORF72 mutation, but not in people with other forms of the disorders (see, e.g., Al-Sarraj et al., 2011; Mahoney et al., 2012; Bigio et al., 2012). It is not yet clear how these mostly cytoplasmic protein aggregates relate to the intranuclear RNA deposits also seen in carriers.

How do the new data relate to the findings that C9ORF72 mRNA levels are lower in carriers? Matching what other groups have found, the authors saw lowered levels of total mature C9ORF72 mRNA in the cerebellum of carriers compared to controls (see, e.g., Dejesus-Hernandez et al., 2011; Gijselinck et al., 2012). However, transcripts containing intron 1, where the expansion occurs, were expressed 10-fold higher in mutation carriers than in controls. This may indicate that mutant RNA is selectively stabilized, Edbauer told Alzforum.

In future work, Edbauer plans to more closely investigate how DPR proteins are expressed, and test each of them for toxicity in cell culture. Based on those studies, he will make a mouse model that accumulates the aberrant proteins. He is also continuing human work to see how closely DPR inclusions correlate with disease, and to discover if the proteins are present in the cerebrospinal fluid and might serve as a biomarker of the disease.

John Trojanowski at the University of Pennsylvania, Philadelphia, called the study “ingenious,” and said that the evidence for DPR translation and accumulation adds an important piece to the ALS/FTLD puzzle. “Having another player to consider in mechanisms of disease is important,” he said. He added that the knowledge may aid researchers in making effective animal models of the disorder.

“I think it is very important work. We had assumed the DENNL72 [C9ORF72] mutation caused disease either through RNA toxicity or through loss of function. This suggests a third and very plausible mechanism: gain of toxic protein function,” John Hardy at University College London, U.K., wrote to Alzforum.

Ranum, now at the University of Florida, Gainesville, was also impressed by the work. “It’s an exciting study because it highlights the possibility that protein gain of function plays a role in diseases that are thought to be RNA gain of function,” she told Alzforum. Both mechanisms may contribute to disease, and could be targeted by killing the messenger RNA, she suggested. “This mechanism of RAN translation may have a role in many expansion diseases. This could be the tip of the iceberg.”—Madolyn Bowman Rogers