Despite ample evidence implicating Aβ in Alzheimer’s pathology, scientists still struggle to understand how the peptide harms the brain. In a June 10 article published online in the Journal of Clinical Investigation, scientists led by Yong-Keun Jung, Seoul National University, Republic of Korea, report that immune cell receptor FcγRIIb binds soluble Aβ and mediates the peptide’s toxicity. These results may suggest a new avenue for therapeutic intervention in AD, wrote the authors.

“The data are quite clear,” said Terrence Town, University of Southern California, Los Angeles, pointing out that the authors explored this interaction in a variety of systems—cultured cells, animals, and humans. “It is a new pathway for Aβ oligomer toxicity.”

FcγRIIb spans the membranes of B cells, macrophages, and neutrophils. The receptor is one of a family that binds the Fc region of antibody complexes. On B cells, FcγRIIb inhibits both phagocytosis and antibody production, keeping the immune responses under control and helping prevent autoimmunity (see Pritchard and Smith, 2003). In general, FcγRs are expressed in the central nervous system and are hypothesized to play a role in neurodegenerative disease (for a review, see Okun et al., 2010). However, scientists know very little about FcγRIIb in the brain, except that it may regulate cerebellar development and function (see Nakamura et al., 2007). Jung and colleagues previously found that primary cortical neurons exposed to synthetic Aβ42 oligomers upregulated this receptor. In this study, they further probed the connection between the two.

Using an anti-human FcγRIIb antibody, lead author Tae-In Kam and colleagues detected the receptor in hippocampal homogenates from AD and normal brains. Greater amounts of FcγRIIb correlated with ascending Braak stage. The authors found that the receptor co-localized with intraneuronal Aβ, which they detected with the Nu-1 antibody.

Turning to animal models, Kam and colleagues found that six- and 17-month-old J20 mice, which express the human amyloid precursor protein, accumulated more of the receptor in the cortex than did control animals. What boosted the FcγRIIb levels? The researchers found that when added to cultured wild-type cortical neurons, synthetic Aβ42 oligomers activated c-Jun N-terminal protein kinase (JNK) and its downstream transcription factor, c-Jun. Previously, researchers had reported that c-Jun activates the FcγRIIb promoter. The findings suggest that Aβ42 works through JNK-c-Jun to promote the receptor’s transcription.

Curiously, Kam and colleagues found that Aβ not only drove production of FcγRIIb via JNK signaling, but also bound to it as well. This suggests the receptor participates in a feed-forward loop, Jung told Alzforum. The FcγRIIb ectodomain coimmunoprecipitated with soluble Aβ42 in extracts from human AD hippocampus, and FcγRIIb bound synthetic Aβ oligomers added to cultured human neuroblastoma cells. Computer modeling predicted that the IgG binding domain of FcγRIIb bound to Aβ42’s N-terminus, and adding Aβ1-9 to compete in the immunoprecipitations confirmed that interaction (see image below). Adding the ectodomain of FcγRIIb to cultured cells soaked up synthetic Aβ42 and prevented it from binding the native receptor. 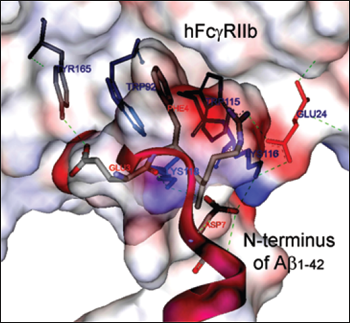 FcγRIIb binds Aβ: A computer simulation suggests that the N-terminus of Aβ42 (red ribbon) binds to the IgG binding domain of FcγRIIb. Image courtesy of the Journal of Clinical Investigation and Yong-Keun Jung

“We believe that selective inhibition in the interaction of FcγRIIb with Aβ1-42 can be considered a new therapeutic [strategy],” wrote the authors. Jung told Alzforum that his group is looking for small molecules that will prevent this receptor from binding Aβ, while allowing it to interact as usual with immunoglobulins. Town agreed that this could be a therapeutic possibility. He wondered whether it would reduce neuron loss in an animal model that underwent significant neurodegeneration.

These are different classes of immune receptors that may either help or hinder neurodegeneration, said Rita Guerreiro, University College London, U.K. “We don’t know yet how these proteins work together to lead to cell death and dementia,” she said. "However, together these studies strongly suggest that the immune response deserves a close look, and hopefully further research will help us piece together the evidence in a comprehensive way."—Gwyneth Dickey Zakaib