The Aβ-binding alcohol dehydrogenase (ABAD) forms a complex with Aβ in mitochondria, promoting leakage of free radicals, mitochondrial dysfunction, and cell death, according to a combined structure/function and animal study to be published in Science today. The paper proposes a molecular mechanism for how Aβ kills neurons; the current absence of a consensus mechanism for Aβ toxicity is one of the most prominent gaps of the amyloid hypothesis.

At the tail end of the last millennium, a spotlight shone briefly on an enzyme that appeared to bind Aβ in the endoplasmic reticulum. Initially dubbed "ER-associated binding protein" (ERAB), it was also found to be elevated in some neurons in AD brain (see Yan (abstr. 881) in Alzforum meeting report.) But then the true site of the enzyme's tryst with Aβ turned out to be mitochondria, and it was renamed ABAD (see, e.g., He et al., 2002). It also carries the moniker 7β-hydroxysteroid dehydrogenase (HSD), type 10 (or just HSD-10), and is known to modulate intracellular levels of sex steroids in non-neural cells (see, e.g., Ivell et al., 2003; Wen et al., 2002). 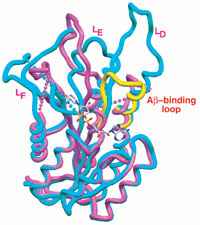 In this figure the Aβ-bound human ABAD complex is shown in pink. For comparison, it is superimposed on the rat ABAD in complex with NAD (blue). The L[D] loop of 3∀-hydroxysteroid dehydrogenase (3∀-HSD) is shown in yellow, and NAD is shown as a stick model in the center. Also shown is the proposed Aβ-binding loop. (Image copyright Science)

Shirley ShiDu Yan of Columbia University in New York City and colleagues have been pursuing this molecule since before its name change and found, among other things, that ABAD might mediate the cellular stress induced by Aβ (Yan et al., 2001). In their most recent study—a collaboration with biochemist Hao Wu's team at Weill Medical College of Cornell University in New York City, as well as with researchers elsewhere—Yan's team explores how and where this potentially destructive coupling takes place.

The researchers first established that there is a significant presence of the ABAD-Aβ complex in human AD brain, as opposed to almost none in normal age-matched controls. The researchers also fingered the complex in mitochondria of 12-month-old mice transgenic for human mutant APP or for both mAPP and ABAD. A closer look with confocal and electron microscopy showed that the ABAD/Aβ complex was taking up residence in the mitochondria of AD-derived cortical brain tissue, as well as in the transgenic mAPP/ABAD mice.

In a further series of experiments, the researchers probed the structural relationships of Aβ and ABAD. They solved the crystal structure of human ABAD in the presence of excess nicotinamide adenine dinucleotide (NAD) and Aβ. (NAD is a cofactor in the enzyme reaction mediated by ABAD.) They determined that Aβ binds to ABAD in such a way as to exclude NAD binding. They also saw that the critical segment of ABAD for recognition of Aβ appears to be the L[D] loop. Armed with this knowledge, the researchers were able to design a selective inhibitor of the Aβ-ABAD interaction, termed the decoy peptide, or ABAD-DP. It consists simply of the short peptide segment that includes the L[D] loop. 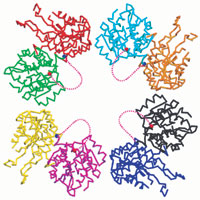 Crystal packing of many separate ABAD molecules, with the ordered ends of the L[D] loops (dotted pink lines) pointing into interconnected solvent channels. Each ABAD molecule is shown in a different color. (Image copyright Science)

Using this inhibitor, the researchers demonstrate in cultured neurons that Aβ-induced oxidative stress is dependent upon ABAD. The ABAD-DP prevents the production of reactive oxygen species, DNA fragmentation, and cell death. And finally, what AD tour de force would be complete without a water maze experiment? The researchers tested transgenic mAPP/ABAD in the radial arm water maze and report that their spatial and temporal memory was severely impaired.

"Taken together, these studies establish that Aβ may exert an important pathogenic role in the mitochondrial compartment through an interaction with ABAD, and that inhibition of ABAD-Aβ interaction may provide a new treatment strategy against AD," conclude the authors. The same issue of Science contains a separate study that also implicates the mitochondria in neurodegeneration and cell stress, this time through the new familial parkinsonism gene Pink1 (see ARF related news story).—Hakon Heimer