The only known mutation immediately adjacent to the β-secretase site in APP, the Swedish mutation is actually a double mutation, resulting in a substitution of two amino acids, lysine (K) and methionine (M) to asparagine (N) and leucine (L). This well-known mutation has been reported in two large Swedish families who were found to be connected genealogically. Affected individuals generally presented first with memory loss and all met diagnostic criteria for Alzheimer's disease (Mullan et al., 1992).

The two substitutions underlying this mutation are absent from the gnomAD variant database (gnomAD v.2.1.1, Oct 2021).

The PHRED-scaled CADD score, which integrates diverse information in silico, was above 20 for each of the substitutions, suggesting that, at least individually, they have deleterious effects (CADD v.1.6, Oct 2021).

Co-segregation with disease in multiple affected family members in a gene definitively known to cause the disease: *Alzforum requires at least one affected carrier and one unaffected non-carrier from the same family to fulfill this criterion. K670_M671delinsNL: Cosegregation demonstrated in >1 family.

Multiple lines of computational evidence support a deleterious effect on the gene or gene product (conservation, evolutionary, splicing impact, etc.). *In most cases, Alzforum applies this criterion when the variant’s PHRED-scaled CADD score is greater than or equal to 20. K670_M671delinsNL: Each substitution comprising this variant has a CADD score >20.

The Swedish mutation is commonly introduced into mouse models of AD because it strongly enhances overall Aβ production. Mice carrying this mutation, such as the Tg2576, J20, and 3xTg models, among many others, tend to accumulate high levels of Aβ and develop amyloid pathology. Of note, the targeting of the Swedish mutation in two mouse models using CRISPR technology resulted in reduced plaques, gliosis, neurite dystrophy, and cognitive decline (Dec 2021 news, Duan et al., 2021). 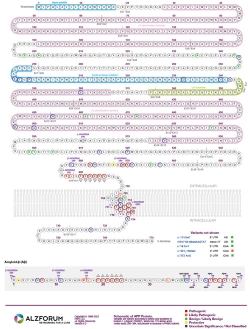