The pathologic similarities between prion diseases and other disorders involving protein aggregation have been apparent for decades, but it has been generally thought that only prion disease can be propagated by corruptive protein seeding. A spate of recent findings—some quite surprising—indicate that the seeded induction of aggregation is possible, albeit with varying degrees of efficiency, for a growing variety of pathogenic proteins, including Aβ, tau, α-synuclein, huntingtin, and—outside of the brain—amyloid A and apolipoprotein A-II. If seeded protein misfolding and assembly indeed is a common mechanism of pathogenesis, this would have important implications not only for understanding how diverse disorders begin, but also for how proteopathy spreads from cell to cell, and tissue to tissue.

This Webinar, led by Lary Walker, explored these questions and more:

As always, your comments and questions are welcome. See the background text for this webinar below. 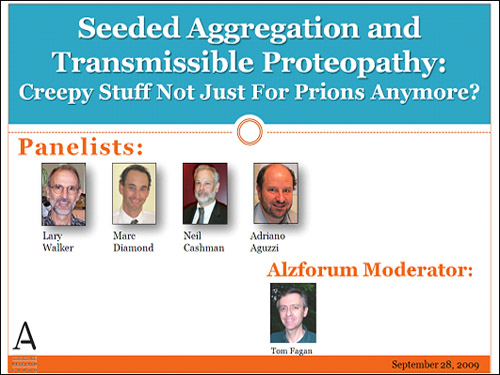 Dense protein aggregates formed from misfolded protein monomers are a feature of many neurodegenerative diseases, including Alzheimer, Parkinson, and Huntington diseases, amyotrophic lateral sclerosis (ALS), and prion diseases, such as Creutzfeldt-Jakob disease. Protein aggregation is also a facet of non-neurodegenerative diseases, such as systemic amyloid A amyloidosis. Of all these disorders, the prion diseases are unique because pathogenic prion proteins are infectious agents that seed the misfolding of normal prion protein and its subsequent aggregation in normal cells and organisms. Different protein conformations, or strains, of prions can also cause disease characteristics or phenotypes (Collinge et al., 2007).

But are prions truly unique in this? A flurry of recent research suggests otherwise. Though misfolded amyloidβ (Aβ), α-synuclein, huntingtin, and other aggregation-prone proteins may not be infectious agents in the sense that they spread disease from one person to the next, evidence has grown that within an individual organism, misfolded forms of these proteins spread through cells and tissues, corrupting normal proteins and seeding protein aggregation as they go. If this is a common mechanism for the spread of pathogenic proteins in a given person, it would have profound implications for the study and treatment of neurodegenerative diseases.

Amyloid-β
Early evidence that non-prion proteins may seed protein aggregation in vivo came from Lary Walker’s lab at Emory University, Atlanta, Georgia. Walker and colleagues showed that Alzheimer disease brain extracts infused into young APP mice could precipitate protein aggregation five months later (Kane et al., 2001). In primates, too, seeding with Aβ-laden brain extracts increases the likelihood that amyloid plaques will develop with age (Ridley et al., 2006). More recently, Mathias Jucker, Hertie Institute for Clinical Brain Research in Tubingen, Germany, and colleagues showed that when injected into discrete locations in the brain of young APP23 mice, diluted extracts from aged APP23 transgenic mice can induce plaque formation near the injection site within three months, and that the pathology spreads to more distal regions by six months (see ARF news on Eisele et al., 2009). The finding supports the idea that Aβ seeds can diffuse and corrupt normal protein in the brain. Earlier, Jucker and colleagues also reported that the type of plaque induced by brain extracts depends not only the type of Aβ in the extract, but also on the nature of the Aβ in the host. Extracts from APP/PS1 transgenic mice produce coarser, more punctate Aβ deposits in APP23 mice, whereas extracts from APP23 mice cause more diffuse plaques in these animals. These phenotypes may depend on the relative amounts of Aβ40 and Aβ42 in the donors and hosts. This would seem to support the idea that, like with prions, there can be different “strains” of Aβ (see ARF related news on Meyer-Luehmann et al., 2006). Fluctuating Aβ40/42 ratios may even be linked to regional brain differences in plaque morphology.

Tau, Too?
This year, strong evidence for the seeding and propagation of the microtubule protein tau also emerged. At the cellular level, Marc Diamond, now at Washington University, St. Louis, Missouri, and colleagues showed that tau, even though it is an intracellular protein, forms seeds that can be passed from one cell to the next, where the seeds induce aggregation of normal tau (see ARF related news on Frost et al., 2009). Tau seeding also occurs in vivo, according to work from the labs of Markus Tolnay at the University of Basel, Switzerland and Michel Goedert MRC Laboratory of Molecular Biology, Cambridge, UK. They showed that brain extracts from P301S tau transgenic mice, which produce filamentous tau aggregates, can induce tau aggregation in another tau-overexpressing mouse strain (ALZ17 mice) that do not normally make tau filaments. Tau aggregates in the ALZ17 mice took six months to appear, and they grew further over the next 6 – 8 months. Importantly, the aggregates spread from the injection site to connected sites in the brain, hinting that the spread of tau pathology in human disease may follow neuronal circuits. Interestingly, Diamond’s work suggests that tau, too, occurs in at least two conformations, or strains, that differ in secondary structure. Seeding with mutant tau drives wild-type (WT) tau into a secondary structure that Diamond calls WT*.

Huntingtin and α-synuclein
The prion-like creep of protein aggregates in the brain is not limited to Alzheimer disease. Mutant huntingtin and α-synuclein may spread in a similar fashion in Huntington and Parkinson diseases, respectively. Ron Kopito’s lab at Stanford University, California, showed that huntingtin-like protein fragments with expanded polyglutamine stretches (Q44) can gain entry into cells and seed aggregation of normal-length (Q25) peptides (see ARF news and Ren et al., 2009). The spread and induction of α-synuclein from one cell to another in vitro was recently described by researchers led by Seung-Jae Lee, Konkuk University in Seoul, South Korea and by Eliezer Masliah, University of California at San Diego (see related ARF news on Desplats et al., 2009). These investigators further showed that normal stem cells transplanted into mutant α-synuclein transgenic mice also acquired the mutant protein, suggesting that cell-to-cell transfer occurs in vivo. This experiment might help explain why normal cell grafts transplanted into the brain of Parkinson’s patients succumbed to Parkinson pathology years later (see related ARF news).

Outside the brain, prion-like mechanisms are known to occur, for example, in systemic amyloidoses. Amyloid A (AA) fibrils can induce AA aggregation when injected into mice (see Lundmark et al., 2002), as can fibrils of apolipoprotein AII (see Xing et al., 2001).