Though it’s now widely accepted that amyloid-β oligomers are bad news for dendritic spines, most of the data supporting this contention comes from cell culture or tissue slice experiments. Showing that Aβ shrivels up spines in vivo has been a tougher nut to crack, mostly because of limitations imposed by microscopy. But in this week’s PNAS online, researchers led by Tara Spires-Jones at Massachusetts General Hospital, Charlestown, get to the kernel of the matter using array tomography, a form of serial microscopy that has the resolution needed to identify individual spines. The results confirm that in a transgenic mouse model of Alzheimer disease, spines vanish from the vicinity of plaques. Because spine density and density of oligomeric Aβ correlate exquisitely with distance from plaques, the results suggest that plaques may be a reservoir of oligomers, which leach out and promote the collapse of dendritic spines, thus “reconciling the apparently competing schools of thought of ‘plaque’ vs. ‘oligomeric Aβ’ as the synaptotoxic species in the brain of AD patients,” write the authors.

Curiously, the paper also reports that some spines are significantly smaller than others in the transgenic animals and—perhaps paradoxically—even in control mice, irrespective of how close the spines are to a plaque. What does correlate with small spine size is binding to Aβ oligomers. “That was one of the most interesting things for me that came of the study, that synapses are contacted by oligomers—even in the control animals,” Spires-Jones said in an interview with ARF. The authors found Aβ oligomers in contact with smaller spines in non-transgenic mice, which have neither human APP nor mutant presenilin and which do not form amyloid plaques. Based on this observation, the authors suggest that oligomeric Aβ might even have a normal physiological role, for example, in long-term depression (LTD), which is known to cause reduction in spine volume. “To the best of my knowledge, oligomers of Aβ have not been seen in control mice brain before,” said Spires-Jones.

This work comes courtesy of array tomography microscopy, a method pioneered by Stephen Smith at Stanford University (see ARF Bar Harbor report), and by NAB61, an Aβ oligomer-specific antibody raised by Virginia Lee’s lab at the University of Pennsylvania, Philadelphia (see Lee et al., 2006). Both Smith and Lee are coauthors on the paper. First author Robert Koffie and colleagues used array tomography to prepare ribbons of 50 nanometer-thin sections of postmortem brain tissue from APP/PS1 transgenic mice and controls. They took serial images of the ribbon and then generated a 3D image of whole stacks of sections. Spires-Jones said that she had tried for years to get good quality images of plaques and spines from postmortem tissue, but even with the best tricks up her sleeve could only get resolution of 2-3 microns, larger than the half-micron synapse. “If we saw colocalization in those thick sections we could just be seeing something above or below the synapse,” she said. But array tomography brings the resolution down to the 50 nm scale.

Using the technique, Koffie and colleagues looked at how the size and number of synaptic spines (as judged by staining for the post-synaptic marker PSD-95) correlated with plaques. They found that the spine density was much lower near plaques, but radiating outward increased in a linear fashion to control levels at about 50 μM from the plaque halo (see figure below). They also found that synapses were smaller in size (by about 40 percent) in transgenic animals compared to controls, though this reduction did not change with distance from plaques. The size reduction does, however, correlate with the presence of Aβ oligomers. Using the NAB61 antibody, Koffie and colleagues found that there is a halo of oligomeric Aβ surrounding plaques, and that the density of the oligomers falls off with increasing distance from the plaque core, just as the synaptic density does. Furthermore, they found that a subset of post-synaptic densities colocalize with Aβ oligomers and that this colocalization is much greater than would be predicted by chance alone. Finally, they showed that those post-synaptic densities in contact with Aβ oligomers were significantly smaller (~40 percent) than those that were Aβ-free. The work suggests that even far from plaques, Aβ oligomers are toxic to synapses. “This is a confirmation of oligomeric Aβ being toxic not just in tissues, cells in culture, and in mice when you inject it, but actually at the synapse in a living system,” said Spires-Jones. 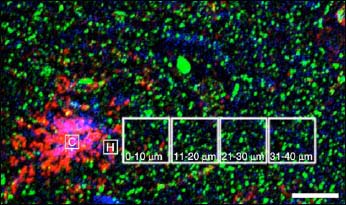 Far and Away
Dendritic spine (green) density and oligomeric Aβ burden (red) both correlate with distance from dense core Aβ plaques, visualized by thioflavin S staining (purple). Plaques may act as a resevoir of Aβ oligomers, which leach out and damage dendritic spines. Image credit: National Academy of Sciences

The work fits with the idea that Aβ oligomers can cause long-term depression (LTD) and loss of dendritic spines (see ARF related news story). The authors even suggest that because smaller dendritic spines are associated with LTD, their findings might be pointing to a physiological role for oligomeric Aβ. That oligomers in control mouse brain tissue also colocalize with smaller spines supports that idea. Though NAB61 was raised against human Aβ, the sequences may be conserved enough between mouse and human that the antibody cross-reacts with the mouse Aβ as well, and the researchers confirmed this biochemically. “It could also be that the antibody works in mouse because it is specific for the oligomeric conformation and not for monomers,” said Spires-Jones. The assumption is that despite primary sequence differences, human and mouse Aβ assume similar tertiary structures when they form oligomers.

The next step will be to look at human tissue. Spires-Jones said that she is already collecting samples for that purpose. One downside of array tomography is that tissue must be obtained freshly for embedding, which precludes material from frozen tissue banks. Spires-Jones is also planning to examine human control tissue. Since many cognitively normal people have been found to have a high plaque burden on postmortem, it may be interesting to see if the same correlations between Aβ oligomer burden and synaptic density losses are also apparent in those individuals. “There is a lot of compensation in humans. You could already have neurons around plaques shrinking but neural systems are able to compensate,” she suggested. There may also be a genetic component to the whole dynamic. “Based on your genetic makeup you may be able to clear oligomers or plaques more effectively,” she said.—Tom Fagan