Thanks to a new imaging technology that enables an investigator to peer again and again into the same brain area of a live mouse without disturbing it, researchers discovered that amyloid plaques, one pathologic hallmark of Alzheimer disease, can literally show up overnight and grow to their full size in just a few days. The study addresses long-standing questions about the sequence of pathogenic changes in the brain, and it affords scientists a more immediate look at those changes than was possible before. In the February 7 Nature, Melanie Meyer-Luehmann, Tara Spires-Jones, and others in Brad Hyman’s group at Massachusetts General Hospital in Charlestown collaborated with David Holtzman’s group at Washington University, St. Louis, Missouri, to generate vivid three-color images of new plaques popping up between daily imaging sessions. Soon after a plaque precipitated, the scientists saw microglia moving in and kinks appearing in nearby neurites. 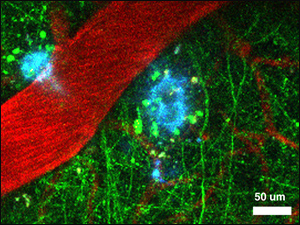 The speed at which plaques arise surprised the scientists, because the established knowledge that Alzheimer disease pathology takes years to accumulate in a person’s brain had led to a general assumption that individual plaques grow slowly. In contrast, the new work shows that once the predominant constituent of a plaque, Aβ protein, has accumulated to sufficient amounts, the deposition of a plaque happens quickly. By implication, the overall growth of the brain’s plaque load would be a long process made up of many local cycles of rapid deposition of a new plaque followed by rapid change in the microenvironment around the new plaque. The present study does not address the role of oligomeric Aβ species, as those cannot yet be imaged in live brain. Neither did it probe whether the newly appearing plaques affect neural activity.

The study directly addresses the question of how plaques form and whether certain other changes in the vicinity of plaques occur before or after a plaque has formed. In this sense, the study aims to test the amyloid hypothesis in its classic form, which claims that amyloid deposition precedes and causes neuronal abnormalities that then lead to dementia.

The Hyman lab has been at the forefront of developing in-vivo multiphoton microscopy techniques for the study of AD. Here the scientist permanently places a glass cover over a small hole in a mouse’s skull, and through this window images the same area of cortex repeatedly over the course of weeks. In this study, Meyer-Luehmann and colleagues used three different mouse models of AD amyloidosis to watch plaques grow. They used APP-transgenic mouse strains that also express YFP in neurons to visualize neurites, dendrites, and axons in the neuropil, injected the amyloid dye methoxy-XO4 to render fibrillar plaques blue, and the dye Texas red dextran to label blood vessels. Existing plaques and blood vessels served as guideposts to orient the scientists, and helped them re-image the same area they had seen the day or week before. Overall, the scientists found existing plaques to be stable over the 1,285 imaging sessions they conducted on 238 brain sites in 14 mice. On 26 occasions, however, they captured the growth of a new plaque in those repeat sessions. Some imaging series were weekly, others daily; the latter revealed five new plaques, each appearing in a 24-hour time span, the researchers report.

New plaques grew little after their “birthday.” They were similar in size to plaques measured in postmortem tissue, most of them being between 5 and 20 micrometers wide. The scientists also looked at where new plaques cropped up in relation to blood vessels. They report that the 26 new plaques tended to form near but not directly on or around blood vessels. In prior studies of older APP- or presenilin-transgenic mice, blood vessels have been seen to be tightly associated with plaques or course right through them, raising the possibility that the brain’s microvasculature has a direct role in plaque formation (Kumar-Singh et al., 2005; ARF related news story; see also Kumar-Singh comment below).

Next, the scientists analyzed the new plaques with regard to two parameters in their local environment, namely microglia and neurites. Within a day of a plaque’s appearance, the scientists noted that microglia moved in next to it, suggesting that perhaps some factors released from the plaque had recruited these cells. However, Meyer-Luehmann et al. never observed neighboring microglia nibble into an adjacent plaque. The role of microglia in AD pathogenesis is uncertain, and phagocytosis of plaques is one of the roles that prior research has proposed. The present data imply that microglia may need to be activated further, such as by an immunotherapy, to actually ingest and remove amyloid plaques (Bacskai et al., 2001). The level of microglial activation seen in the current study might explain why the plaques barely grow after their initial appearance, the scientists speculate. Other studies have suggested that activated microglia limit plaque growth (Simard et al., 2006).

Like microglia, neurites in the neighborhood of a newly formed plaque also responded within the same time frame of between a day and a week after a plaque had appeared. Where these neurites were previously straight or bending smoothly, they became more curved and twisted. Recent work from Larry Goldstein’s group at the University of California, San Diego, had suggested that defects in axonal transport—recognizable morphologically as misshapen, or dystrophic neurites—precede amyloid pathology and can accelerate the formation of plaques (Stokin et al., 2005). The present study was unable to see plaques forming in areas that had prominent neuritic dystrophy; instead, it suggests that neurites become distorted after a plaque has formed. However, the authors do not rule out the importance of axonal transport changes in AD pathogenesis (see also Goldstein comment below).

Overall, the study provides a glimpse into the dynamic changes in the brain of AD mouse models. The technique allows scientists to watch from deposition onward what happens near a plaque. Meyer-Luehmann and colleagues see plaques as the source of soluble Aβ and possibly other bioactive molecules—indeed, many AD scientists talk about plaques as “leaching toxic waste dumps.” The important question of whether a newly formed plaque changes neural activity in its immediate environment remains to be tackled.

In AD mouse models, numerous studies have documented learning and memory deficits prior to plaque formation, whereas in humans, amyloid imaging suggests that pathology appears to be nearly complete before people are diagnosed with AD. This discrepancy leaves still unsolved the larger “chicken-and-egg” dilemma about the sequence of events around Aβ accumulation and dementia, even as it establishes that plaque formation precedes microglial activation and derangement of neurites in these models. New live imaging tools (see Bar Harbor report) are needed to assess the role of amyloid on function and to probe what role Aβ oligomers, and other factors, may play prior to plaque deposition.—Gabrielle Strobel

Q: My jaw fairly dropped at how quickly the plaques appear. You report it in three different mouse models. Still, can you be sure that it is not an artifact of some experimental manipulation?
A: While we cannot be certain, the three models we used have greatly differing tempos (onset varying from 6 months to 14 months), so we think that the rapid plaque formation occurs independently of the tempo of the model.

Q: Some readers may interpret your findings as, "So it's the plaques, after all." Does your new finding promote a hypothesis of plaque toxicity at the expense of oligomer toxicity?
A: The "halo" effect suggests that there is a bioactive, diffusible substance that is high near plaques. While we have not identified this species with certainty, oligomeric Aβ is a great candidate. We think this is more an issue of "both" rather than "either."

Q: Most scientists at this point agree that both plaques and oligomers/protofibrils are bad. Is the relationship between toxicity attributable to specific aggregation forms of Aβ still an important question?
A: Of course!

Q: Do you intend to address it in this system?
A: We are testing reagents that might give a handle on oligomeric forms, but do not have data yet.

Q: Are there any tools on the horizon to image oligomers in vivo?
A: (Maybe!)

Q: You propose that plaques are a source of toxic oligomers, which might damage neurites. But presumably, oligomers were present in the brain parenchyma before the day the plaque precipitated, and present at high concentration if one assumes they accumulate to a certain point and then “crash” out of solution into a plaque. Why would oligomers not have caused the curved neurites, activated microglia, and done other bad things before the plaque showed up? Why in the 5 days after the plaque?
A: These are great questions.

Q: Trying to find out which aspects of microglial activation are detrimental and which might indeed be compensatory is a complicated issue in the field. What's the upshot of your paper on that question?
A: I think you have put your finger on one of the issues that we need to focus on—it is a complicated but fascinating set of questions.

Q: Where does evidence for axonal transport deficits still fit into your observations? Do you see it as secondary to amyloid pathology?
A: We are launching a series of experiments explicitly testing the idea that axon transport is altered near plaques.

Q: Do your findings have implications for current anti-amyloid drug development approaches?
A: Our data suggest that a viable target would be the nucleation phenomenon, and also that plaques per se are an important target.

Q: How about anti-inflammatory approaches?
A: The apparent role of microglia in stopping further growth of plaques would seem to indicate that some aspects of microglial activation might be beneficial.

Q: What's next in your line of research?
A: Understanding the functional consequences of plaque formation.