Some dismiss it as a therapeutic dead end, but for others, the M1 muscarinic receptor is a target for ongoing drug development research in Alzheimer’s disease (AD). These receptors receive acetylcholine in the postsynaptic membrane, mediating cholinergic transmission. Since various subtypes of nicotinic and muscarinic receptors are present throughout the body, drugs that target all acetylcholine receptors or boost levels of the transmitter, as does donepezil, have nasty side effects, such as vomiting, nausea, and bladder infections. At the 11th International Conference on Alzheimer’s and Parkinson’s Diseases, held 6-10 March 2013 in Florence, Italy, researchers presented the latest data in their search for compounds with fewer side effects that selectively target the M1 receptor. “This is a key pathway that has been successfully exploited for treating one aspect of Alzheimer’s disease,” said Dirk Beher. “Therefore, there’s a higher probability of success for new drugs that target it.” Beher recently left Merck Serono to start up Asceneuron, Lausanne, Switzerland.

Beher introduced a novel M1-targeting compound called ASN-51, currently under development by Asceneuron. ASN-51 is a highly M1-specific positive allosteric modulator (PAM). PAMs amplify the effect of the natural ligand, whereas NAMs weaken it. Beher and colleagues developed this compound starting from a hit from high-throughput screening. The compound binds to M1 at a spot other than where its ligand binds and potentiates the receptor response by heightening M1’s affinity for acetylcholine. Since the neurotransmitter wanes in AD, enhancing M1’s sensitivity to acetylcholine is likely a good thing, said Beher.

In cellular assays with CHO cells overexpressing all five types of muscarinic receptor and in mouse primary neuron cultures, ASN-51 was effective at nanomolar concentrations and modulated only the M1 subtype. Following one oral dose, the compound got into the brains of wild-type mice and elicited a dose-dependent rise in inositol monophosphate, which happens in response to activation of Gq/11 receptors that are coupled to M1, M3, and M5. After optimizing ASN-51, the company plans to see if it benefits preclinical cognition models such as those in the scopolamine challenge paradigm, Beher said.

Scientists in the audience raised concerns about peripheral side effects, such as gastrointestinal problems, seen with other compounds said to target the M1 receptor. That won’t be a problem, claimed Beher. According to the cellular profile of ASN-51, the drug is more selective for M1—the primary muscarinic receptor in the brain—than previous compounds, meaning it should affect peripheral muscarinic receptors less.

The fact that ASN-51 is a positive allosteric modulator bodes well for the drug’s safety. “PAMs are good compounds because they avoid the side effect of strong M1 activation; they only increase the endogenous signal,” said Christian Czech, who works at Roche in Basel, Switzerland, but did not speak on their behalf. This makes PAMs generally safer than agonists, he told Alzforum. Czech noted that Beher has not yet presented toxicity data, which will be necessary to move the compound forward.

Scientists at Heptares Therapeutics in Hertfordshire, U.K., are aiming for a similar goal. They want to find a specific agonist to bind M1’s acetylcholine site and activate the receptor even when the natural ligand fades from the AD brain. That is not an easy task, as all muscarinic receptor subtypes have a highly conserved binding site for the neurotransmitter, explained Alastair Brown. To find such a precise ligand, Heptares is using structure-based design, where researchers stabilize the receptor with one of a number of different agonists in the binding site, and then crystallize it. By reconstructing an image from the pattern of x-rays as they travel through the crystal, scientists can study the exact binding mode of each agonist and determine how it interacts with the protein. By comparing these data between receptors, they can discover what makes M1 binding unique and develop new molecules that fit those specifications. 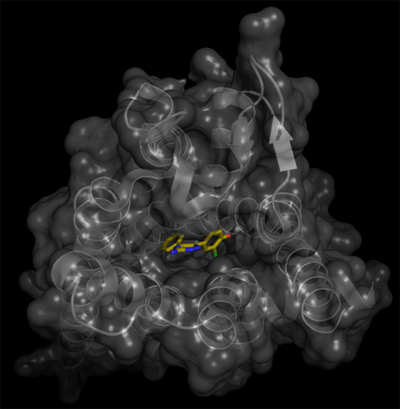 In structure-based drug design, researchers stabilize a receptor with different compounds in the binding site to study how protein and ligand interact at the atomic level. This example depicts a noradrenaline receptor with a synthetic agonist; the M1-POM combination discussed in this story is proprietary. Image courtesy of Heptares Therapeutics

Through this method, Heptares generated (S)HTL-B, a compound they claim is highly selective over the M2 or M3 receptors. In rats, the drug improved discrimination in novel object recognition and counteracted a scopolamine-induced deficit in passive avoidance, Brown said. The compound’s benefits added to those of donepezil, which retains acetylcholine in the synapse by limiting its breakdown. The company is studying the compound’s toxicology and planning a Phase 1 trial, Brown said.

Another potential candidate for an allosteric M1 agonist is AF710B, a compound Abraham Fisher of the Israel Institute for Biological Research, Ness Ziona, presented at a conference in Zuers this past December (see ARF related news story). AF710B revs up secretion of sAPPα, anti-apoptotic BCL2 expression in mitochondria, and reduces tau hyperphosphorylation, GSK-3β activity, and the apoptotic Bax protein. Fisher hypothesizes that the drug acts on heterodimers of the M1 with the σ-1 receptor in the membrane of the ER.

At the AD/PD Conference, Fisher presented data from the first tests of AF710B efficacy in transgenic mice. In a chronic dosing study, Rodrigo Medeiros and Frank LaFerla of the University of California, Irvine, injected 10 μg/kg/day of the compound into the peritoneum of 10-month-old 3xTgAD female mice daily for two months. These mice performed better than untreated transgenics in the Morris water maze. Animals were sacrificed at 12 months, and treatment about halved soluble and insoluble Aβ40 and Aβ42. Tau phosphorylation fell by more than half while astrocytes, microglia, and markers of inflammation diminished. Mice experienced no side effects. Neither did rats at acute treatment of concentrations 50,000 times higher than the effective dose, said Fisher.

Despite some apathy in the field for the acetylcholinesterase pathway, it is still an important target because AD patients need therapies that treat their symptoms better than does donepezil. “In the absence of a disease-modifying treatment, we can still aim to produce a compound with a higher efficacy that lasts for a longer period of time,” Czech told Alzforum. Even if a disease-modifying compound is found, it may not have immediate effects on AD symptoms. “If you could combine it with a good symptomatic treatment, the benefit for patients would be even higher,” Czech said.—Gwyneth Dickey Zakaib.