Call it nanonova. Okay, the analogy is far-fetched, for unlike a supernova, an exploding neuron hardly spews out tons of debris at lightning speed. But if Charlie Glabe is right, an exploding neuron does expel material that then triggers the formation of new, stable matter in its surroundings, and this is how amyloid plaques are born. This, at least, was one of the more stellar narratives to emerge from the 11th International Conference on Alzheimer’s and Parkinson’s Diseases, held 6-10 March 2013 in Florence, Italy. In a provocative talk that reverberated in the hallways, Glabe, at the University of California, Irvine, showed images of dying neurons, their nuclei—yes, nuclei–stuffed with amyloid. The work came out of a project to create tools to distinguish between the different flavors of the Aβ peptide, in particular to detect the small oligomeric forms that many scientists believe to be the most deadly. The data could help resurrect an old hypothesis, which holds that ruptured neurons form the core of neuritic plaques. On the broader question of how to visualize and track oligomeric forms of pathogenic proteins, numerous talks and posters at AD/PD 2013 showcased conformation-specific antibodies. 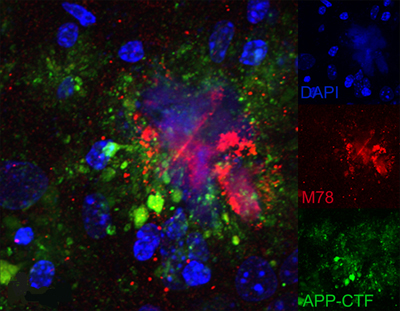 “This is a bold idea,” Gunnar Gouras at Lund University, Sweden, told Alzforum. “Glabe has been a trailblazer in this area.” Gouras pointed out that traditional ways of looking at amyloid often involve grinding up brain tissue, but antibodies such as the one Glabe made can see native protein forms in unfixed tissue, providing a glimpse into the natural pathophysiology. Other scientists expressed surprise at seeing evidence of Aβ in the neuron’s nucleus, a place the peptide is not thought to frequent.

Glabe previously generated antibodies specific for oligomeric Aβ by using a synthetic peptide, and he is developing an active vaccination strategy with this peptide as a potential therapy (see ARF related news story; ARF news story). In Florence, Glabe asked a broader question: Is the wide variation in Aβ species truly significant for the pathogenesis and heterogeneity of Alzheimer’s disease? To address this, Glabe immunized rabbits with Aβ42 and analyzed the resulting antibodies on an array dotted with 132 different forms of amyloid, including Aβ monomers, oligomers, fibrils, and islet amyloid polypeptide. He selected for further analysis 24 antibody clones that each gave different patterns of reactivity on the array. This process generated several new research tools, he noted, such as antibody M31, which stains only vascular amyloid deposits.

Do Dying Neurons Seed Plaques?
Most of his AD/PD talk, however, focused on antibody M78, which recognizes fibrillar protein forms made up of parallel β-sheets. M78 is not specific for Aβ; it also reacts with fibrillar APP and α-synuclein deposits, Glabe said. In aged human brains with some AD pathology, M78 stains nuclear and perinuclear regions of neurons, oligodendrocytes, and astrocytes in most brain regions. It seems to mark an early stage of disease, as M78-positive brains came from people who had either normal cognition or mild cognitive impairment (MCI). M78 staining goes down as more plaques deposit.

Glabe was particularly intrigued by the abnormal morphology of M78-positive neurons. Their nuclear envelope was swollen, DNA fragmented, and cell bodies filled with multivesicular bodies. Glabe used 3xTg mice to examine these changes with age. At 10 months, these animals showed the earliest M78 staining. It was perinuclear and co-localized with β-CTF immunoreactivity, implying that APP may have been cleaved by BACE1 nearby. By 12 months, M78 staining showed up in the nucleus, while β-CTF remained on the outside. By 14 months, the antibody marked the remains of a nucleus containing diffuse DNA, in the center of a neuritic plaque surrounded by ruptured membranes that stain for β-CTF. The plaque center also stained with the neuronal marker NeuN, confirming its neuronal origin. Glabe pointed out that all of these molecules maintained the same spatial relationships with each other observed two months earlier. The findings imply that amyloid accumulation lyses nuclei, Glabe said.

“Each senile plaque arises from the demise of a single neuron,” Glabe concluded. In his model, what scientists call “dystrophic neurites” are not neurites at all, but rather the remains of the exploded nuclear envelope and endoplasmic reticulum.

Glabe noted that this is not a new idea. Michael D’Andrea at The RW Johnson Pharmaceutical Research Institute, Spring House, Pennsylvania, suggested in the year 2000 that lysed neurons form amyloid plaques (see D’Andrea et al., 2001). Numerous other researchers, such as Gerd Multhaup at the Free University of Berlin, Germany, and Frank LaFerla at the University of California, Irvine, have seen intraneuronal amyloid, although controversy has erupted over whether this is actually Aβ or APP (see ARF Webinar). Reports of intranuclear Aβ, on the other hand, are quite rare, and turned heads in Florence. Glabe is careful to note that M78 is not necessarily detecting Aβ in the nucleus; it could be aggregated APP or C-terminal fragments of APP.

Numerous researchers at the conference praised the quality of the work and debated the questions it raises. “There is definitely a cell soma at the heart of plaques,” said Virgil Muresan at the University of Medicine and Dentistry of New Jersey, Newark. He pointed out that the perinuclear compartment, where Glabe first sees Aβ and β-CTF accumulation, plays an important role in APP processing, making it a logical place for deposits to start. Christian Haass at Ludwig-Maximilians University, Munich, Germany, observed that, because M78 recognizes several types of β-sheet fibrils, further work is needed to determine exactly what protein the antibody is detecting in the nucleus. He questioned whether Aβ itself could get in, given that the peptide is typically exported. Maybe it moves in after the nuclear envelope breaks down, he suggested. Gouras suggested that live imaging of cells would help nail down the progression of events, although he acknowledged that this would be technically challenging to do. Another unanswered question is how Aβ gets inside cells in the first place. It may simply accumulate in endocytic or secretory compartments where it is processed or, alternatively, cells may take up oligomeric Aβ from the outside, Glabe said.

Specific α-Synuclein Antibodies for Parkinson’s Disease Research
Meanwhile, Parkinson’s disease researchers are also developing antibodies to various toxic forms of α-synuclein, the main pathogenic protein in Parkinson’s disease. They did not deploy the antibodies to trace the provenance of Lewy bodies, but to instead characterize their potential for biomarker or therapeutic use. Therese Fagerqvist, working with Lars Lannfelt, Martin Ingelsson, and Joakim Bergström at Uppsala University, Sweden, immunized mice with α-synuclein oligomers made using an in-house process (see Näsström et al., 2011). In collaboration with BioArctic Neuroscience AB, Stockholm, Sweden, she selected for two monoclonal antibodies, mAb38F and mAb38E2, that have 150 times more affinity for α-synuclein oligomers than monomers but show no cross-reactivity with aggregates of tau, Aβ, or other synucleins. These antibodies detect pathology in A30P α-synuclein transgenic mice earlier than do commercial antibodies such as Syn-1, Fagerqvist reported. The new antibodies revealed that α-synuclein oligomer levels increase 10-fold with age in the brain and spinal cord of A30P mice. Higher oligomer levels in the endoplasmic reticulum coincide with behavioral symptoms, she noted (see Fagerqvist et al., 2013). The antibodies prevent α-synuclein oligomerization in cellular assays. When the researchers injected a related antibody, mAb47, into 14-month-old mice weekly for three and a half months, it lowered α-synuclein oligomer levels in brain extracts. The researchers are currently testing behavior.

In contrast, Gabor Kovacs at the Medical University of Vienna, Austria, described an antibody, 5G4, that he said reacts only with disease-associated forms of α-synuclein, both fibrillar and oligomeric (see Kovacs et al., 2012). 5G4 was developed in collaboration with biotech company AJ RoboScreen GmbH, Leipzig, Germany. An ongoing clinical study with 200 participants is testing its use as a biomarker of PD (see press release). In his talk, Kovacs also claimed that 5G4 detects pathology with more sensitivity than commercial antibodies. It stains deposits in the neuronal cytoplasm and processes, as well as in astrocytes. In ultrastructural studies done in collaboration with Lajos László at Eötvös University of Science, Budapest, Hungary, the researchers also see α-synuclein in endosome-like structures in neurons, supporting findings that the protein may enter cells through this route (see ARF related news story). In neurons, small α-synuclein aggregates were surrounded by clusters of mitochondria, while astrocytes contained fibrillar structures. PD patients who rapidly developed dementia had higher levels of antibody staining in limbic regions compared to those with stable cognition or slowly progressing dementia, implying that spread of α-synuclein pathology to this brain area might explain some cases of dementia associated with Lewy pathology. The antibody gives a signal even from old brain sections that have been preserved for years in formalin, suggesting it could be useful in re-evaluating archival material, Kovacs added.

Several other groups presented posters in this area. Omar El-Agnaf at United Arab Emirates University, Al Ain, has made several monoclonal antibodies specific for either oligomeric (Syn-O1, Syn-O2, Syn-O3, Syn-O4) or fibrillar (Syn-F1, Syn-F2) forms of α-synuclein, which he reported to have low affinity for monomers and do not cross-react with aggregates of tau, Aβ, other forms of amyloid, or synuclein. In previous work using a different antibody, El-Agnaf showed higher levels of α-synuclein oligomers in the cerebrospinal fluid of PD patients compared to controls, suggesting this could make a biomarker (see ARF related news story). Likewise, Harald Weninger and Markus Mandler at AFFiRiS AG, Vienna, Austria, described in a poster the development of their α-synuclein antibody, PD01. It curtails α-synuclein pathology and neurodegeneration in PD/DLB mice while improving their performance in the Morris water maze, Weninger said (see ARF related news story and Schneeberger et al., 2012). He stayed mum on the details of how the antibody was made or what form of α-synuclein it recognizes, however. The antibody crosses the blood-brain barrier and is in Phase 1 trials for PD.

The preceding studies represent only a smattering of the work in this area, all of which may provide researchers with new tools for investigating the role of specific conformations of pathogenic proteins in disease. We invite readers to add other examples through Alzforum commentary.—Madolyn Bowman Rogers.