The 11th Annual AD/PD 2013 Conference held 6-10 March 2013 in Florence, Italy, featured a session sponsored by the biotech company Io Therapeutics in Santa Ana, California, at which researchers connected with the company and at an academic center proposed that a cancer drug newly proposed for neurodegenerative diseases seems to do it all—rejuvenate dopaminergic cells; break up α-synuclein, Aβ, and tau aggregates; and quell neuroinflammation. The drug, IRX4204, is being tested in a small Phase 2 trial for treatment of prostate cancer. 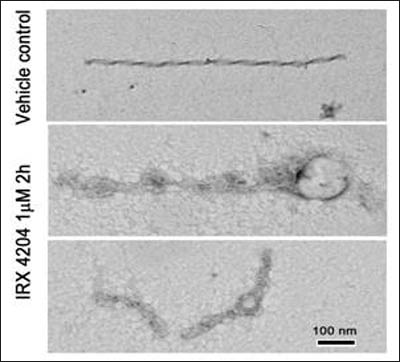 “We can protect dopaminergic neurons, give them trophic support for survival, and at the same time, interfere with some of the mechanisms that form the basis for degeneration in multiple diseases,” said Giulio Pasinetti, Mount Sinai Hospital, New York, who chaired the session.

What is this multitasking drug? Martin Sanders, who is the CEO of Io Therapeutics, Inc., presented IRX4204 characteristics gleaned from its development in cancer. The compound works as an agonist for retinoid X receptors (RXRs), which are in the cell nucleus and bind either to each other to form homodimers, or to different nuclear receptors to form heterodimers. Upon activation by a ligand—either an endogenous one or a drug—these receptor complexes regulate gene transcription. Many pharma companies have been trying to develop RXR agonists for Alzheimer’s disease but have dropped them because of liver and other toxicities. Sanders emphasized that IRX4204 is extremely selective for RXR over retinoic acid receptors (RAR), claiming that it activates RXR homodimers maximally at concentrations of just 1 nanomolar and RAR homodimers at concentrations in the micromolar range. At low doses, “IRX4204 specifically activates RXR, which means the drug will not have clinically adverse events related to RAR activation,” Sanders said.

What tipped off the researchers that their drug could straddle cancer and neurodegeneration? Elizabeth Nowak, a postdoctoral fellow in the laboratory of Io co-founder and scientific advisor Randy Noelle at the Geisel School of Medicine at Dartmouth University, Lebanon, New Hampshire, told the audience that IRX4204 affects neuroinflammation and autoimmunity. In a B6 mouse strain of experimental autoimmune encephalomyelitis, a commonly used model for multiple sclerosis, treatment with IRX4204 reduced the number of myeloid dendritic cells and CD4+ T cells that crossed the blood-brain barrier to enter the central nervous system. These cells demyelinate neurons, leading to disease, but in treated mice disease was delayed and less severe than vehicle-treated controls, Nowak said. She used six to eight mice per group.

Treatment with IRX4204 was associated with lower IL-17A production by CD4+ T cells in the periphery, Nowak said. This suggests that the Th17 lineage, a population of CD4+ T cells that releases this cytokine and is considered pathogenic in this and other models of autoimmunity, was impaired. Sanders and Rosh Chandraratna, who, according to Io Therapeutics, took a series of retinoid and rexinoid compounds from the larger company Allergan to co-found the biotech company, reasoned that the drug might treat neuroinflammatory and autoimmune processes in Alzheimer’s and Parkinson’s.

Sanders and colleagues found that IRX4204 does not transactivate RXR/PPARγ or LXR heterodimers. Rather, it transactivates the RXR/Nurr1 heterodimer, which is known to promote expression of genes that play a role in dopamine synthesis and the maintenance of dopamine neurons (see Perlmann and Wallén-Mackenzie, 2004). That suggested a possible benefit for Parkinson’s disease (PD).

Other experiments suggested that IRX4204 disrupts aggregation of α-synuclein in vitro and improves behavior in mice. The drug prevented dimers and trimers of the protein from forming in photo-induced crosslinking tests, reported Pasinetti. In behavioral tests, rats that had a one-sided lesion of the nigrostriatal pathway were tube fed for three weeks with 10 mg/kg/day of the drug. They performed better on the cylinder test than untreated controls.

Jun Wang, a collaborator of Pasinetti’s at Mt. Sinai Hospital, tested the drug’s effect on Aβ42 oligomerization by using nuclear magnetic resonance spectroscopy to see whether the drug interacts with the peptide. When Aβ and IRX4204 were combined in equal concentrations, a small cluster of Aβ’s atoms changed position, suggesting to Wang that IRX4204 binds to Aβ42 and changes its conformation. In in-vitro crosslinking experiments, equal molar concentrations of IRX4204 reduced the concentration of Aβ40 and Aβ42 dimers, trimers, and tetramers, supporting the idea that the interaction between the drug and Aβ can interfere with the formation of Aβ oligomers, Wang said.

In TgCRND8 mice, an aggressive amyloid deposition model, six weeks of daily IRX4204 oral treatment of 10 mg/kg/day resulted in 4-8 nanomolar accumulations in the brain after 10 days. Treated TgCRND8 mice performed better on the Morris water maze test and tests of contextual memory than vehicle-treated transgenics. These mice demonstrated no side effects, Wang said. On brain slices, treated mice had fewer hippocampal and cortex plaques than did controls.

Wang looked for drug effects on long-term potentiation in brain slices of 18-month-old Tg2576 mice, which are known for their LTP deficit. Incubating with 300 nM of IRX4204 for one hour restored LTP almost to wild-type levels. What pathways could lead to the improvement? In mouse N2a cells, scientists found that treatment activated the CREB pathway necessary for LTP. “We think IRX4204 can prevent oligomerization, activate CREB signaling, lead to improved synaptic plasticity, and contribute to learning and memory in AD,” Wang said.

Not only that, but IRX4204 may also prevent and break up tau aggregates, Wang claimed. As in the Aβ crosslinking studies, IRX4204 prevented dimers, trimers, and tetramers of tau from forming. Wang transfected SH-SY5Y cells and HEK293 cells with GFP-labeled tau and induced its aggregation by adding paired helical filaments isolated from human brain. If she treated these cells with 1 nanomolar of IRX4204, less insoluble tau formed. In vitro, Wang said that IRX4204 unraveled tau β-sheets from human brain-derived paired helical filaments (PHFs) in a dose-dependent manner. At a concentration of 1 micromolar, 90 percent of the PHFs lost filament structure, while 10 nanomolar of IRX4204 unraveled half of the filaments in two hours. “To date, Aβ therapy has not been successful by itself,” Wang told Alzforum. “This drug can potentially target both pathological features of AD.”

Io Therapeutics has completed a four-week Phase 1/2 study of IRX4204’s effects on solid tumors that were unresponsive to treatment. Eighteen patients with various types of cancer tolerated the drug without compound-related severe adverse events. Disease stabilized in half the patients for four months or longer, and in two patients for more than a year. Side effects included elevated triglycerides and hypothyroidism, both known and treatable consequences of RXR agonism, Sanders said. Alzheimer's researchers commented that while these side effects are acceptable when a person is critically ill with cancer, they may be a problem for aging patients who are taking a drug for years.

Does IRX4204 get into the human brain? Pasinetti did not answer this Alzforum question directly. He said scientists would aim to find out in a future trial. He spoke about the need to establish how much of the drug crosses the blood-brain barrier and engages its target in the brain, what its half-life is in the cerebrospinal fluid (CSF), and determine an effective concentration for clinical intervention. Experiments in mice indicate that the drug reaches nanomolar concentration in the CSF, Pasinetti told Alzforum.

Overall, other scientists at AD/PD expressed some skepticism about this drug, though most declined to be quoted by name. "These cancer biologists have made an interesting foray into neurobiology and have a series of interesting preliminary observations,” said Landreth. “However, they have not convinced me that the drug is absolutely specific for the RXR/Nurr1 heterodimer,” he told Alzforum. “Looking at their side effect profile, it seems some activity may be due to added interactions with RXR in combination with LXR or PPARγ."

That selectivity profile will be key to success for an RXR-modifying drug, said other experts. Some RXR agonists are known for their pleiotropic effects because RXR dimerizes with various other nuclear receptors. In addition, given that many of these compounds come from the cancer field, it remains to be seen whether they are safe enough for long trials in AD, they told Alzforum.—Gwyneth Dickey Zakaib.