A National Institutes of Health initiative seeks to map the connections of the healthy human brain and provide a huge reference database freely available to researchers worldwide. The five-year “Human Connectome Project” began in autumn 2010, and its leaders provided a progress update in a symposium at the Society for Neuroscience 2012 annual meeting, held 13-17 October in New Orleans, Louisiana. James Bjork at the National Institute on Drug Abuse, Bethesda, Maryland, said the goal is to create a “gold-standard dataset” of brain wiring that “will have an immense impact on our understanding of disease states.”

To achieve this, NIH funded two parallel consortia under its Blueprint for Neuroscience Research, which tackles large projects beyond the scope of a single institution (see also NIH press release). Researchers at Washington University, St. Louis, Missouri, and the University of Minnesota, Twin Cities, lead the “WU-Minn” consortium. This project spreads over 10 institutions and costs $30 million. It will map the connectomes of 1,200 healthy young adults to high resolution and relate this structural data to functional, behavioral, and genetic information gathered on the same volunteers. The second consortium, based at Massachusetts General Hospital and the University of California, Los Angeles, focuses on building a state-of-the-art magnetic resonance imaging (MRI) scanner with “exquisite sensitivity” for imaging axons, said David Van Essen at WashU. All data from the two consortia will be made freely available through the Internet as it is generated. “We hope it will be a game-changer” for neuroscience research, Van Essen said.

This project will fill a gap in neuroscience, presenters said. Scientists understand less about how structure relates to function in the brain than they do for any other organ, said Van Wedeen at Massachusetts General Hospital, Boston. Connections between neurons define neuroanatomy, and these thin fiber tracts show up poorly with most imaging technologies. To visualize axons, researchers use a variant of MRI called diffusion tensor imaging, which maps the flow of water through tissues. As fluid moves along versus across axons, the technique allows scientists to see these microscopic projections. A recent advance, diffusion spectrum imaging (DSI), distinguishes intersecting tracts (see Wedeen et al., 2008). Crossing fibers cause a problem for dissecting brain structure, because multiple pathways can occupy the same location, Wedeen said. With these new techniques, “We can see things that cannot be seen with any other method,” Wedeen told the SfN audience. That includes visualizing the three-dimensional fiber architecture of the entire brain, he said (see video below). 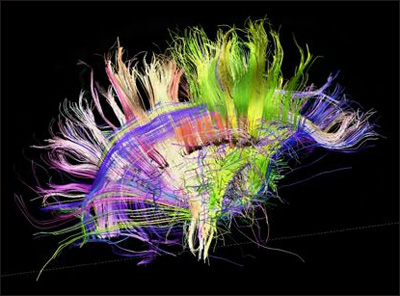 While maps of young adult brains will be informative, several audience members expressed interest in seeing a developmental time course of brain connectivity. At the moment, looking at younger brains or healthy older brains is beyond the scope of the project, said Story Landis, who directs the National Institute for Neurological Disorders and Stroke. If the community embraces the current database, however, future projects to look at connectivity in other populations might get funded, she added. Since equipment and infrastructure are now in place, such add-on projects would have a smaller price tag, Landis pointed out. Many researchers in the Alzheimer’s field have shown that brain connectivity in key regions decreases as the disease advances, making this a hot topic for AD research (see ARF related news story; ARF news story; and ARF news story).

"This project will be an important step in developing connectivity methods that can be used in AD research. The methods have great potential, and a lot of work is underway to enable optimal measurement stability for time series data," Keith Johnson at the Massachusetts Alzheimer's Disease Research Center, Boston, wrote to Alzforum. Other researchers agree. "The lessons we learn from the project could be easily translated to aging and AD. An understanding of what normal connections are will allow us to determine pathological changes," Beau Ances at WashU wrote to Alzforum. Neither researcher is involved in the project.

Van Essen gave an update on the WU-Minn consortium project, which he co-directs together with Kamil Ugurbil at the University of Minnesota. Phase 1, now complete, optimized data collection methods. In Phase 2, which began in August 2012, researchers collect data from volunteers. The 1,200 participants range from 22 to 35 years old and comprise 300 twin pairs (both identical and fraternal) and their siblings. The researchers chose this design in order to look at the heritability of brain circuitry patterns, Van Essen noted. So far, the consortium has scanned 12 participants, and posted a “starter kit” of data. They plan to have 80 participants scanned by the end of November, and will continue with quarterly data releases, the next one in February 2013, Van Essen said.

This project exemplifies “big data,” as it will generate about one petabyte, i.e., one quadrillion or 1,000,000,000,000,000 bytes of data, about 2,000 times the size of a typical desktop hard drive. During two days of testing, participants undergo a battery of imaging scans, including resting-state functional MRI (fMRI), task fMRI, diffusion MRI, and in some participants, magnetoencephalography and electroencephalography to look at brain electrical function on a millisecond time scale. During task fMRI, the volunteers perform seven exercises that engage different brain areas. These include tests of working memory, language, social cognition, and relational reasoning. Other tasks map the motor system, engage the reward system through a gambling paradigm, and evaluate recognition of facial emotions. In addition, the researchers collect demographic and behavioral data, and administer various tests of cognition and personality, including 19 tests from the NIH toolbox, a freely available set of cognitive, motor, sensory, and neuropsychological tests. In the fifth year of the project, the researchers will genotype participants using either single-nucleotide polymorphisms or whole-exome sequencing, depending on available funds, Van Essen said.

To use the data, other researchers can download the freely available Connectome Workbench platform. It allows visualization of the results in three dimensions and manipulation of the representation via toolbars. The Human Connectome data will link to other Internet resources such as the Allen Human Brain Atlas, which records patterns of gene expression in the brain. Gene expression patterns correlate well with functional connectivity, Van Essen noted.

The high-resolution connectome data generated by WU-Minn could have many uses, said Heidi Johansen-Berg at the University of Oxford, U.K., in her talk. For example, researchers might identify boundaries between brain regions by looking for changes in connectivity patterns. Using task fMRI data, researchers can ask questions such as, What brain networks co-vary with working memory performance? The findings will identify anatomical pathways relevant to task performance. For example, good two-handed coordination correlates with strong connectivity in a small cluster in the corpus callosum, Johansen-Berg said.

Presenters also touted the technical imaging improvements achieved by the WU-Minn consortium. Typical MRI images have a resolution of 2 or 3 millimeters, Johansen-Berg said. By contrast, the Human Connectome Project manages a resolution of 1.25 mm on its machines with 3 Tesla magnetic fields. Its scanners have a gradient strength of 100 mT/m, compared to the standard 40 mT/m, creating images with a higher signal-to-noise ratio and more clarity. All participants will be scanned on 3 T machines, with a subset also getting scans at 7 T and even on a 10.5 T machine under development, noted Ugurbil. These machines will provide higher resolution and contrast, and might allow researchers to see functional connectivity among fine structures such as cortical columns, Ugurbil suggested. Because diffusion MRI data contain some artifacts, researchers will validate the data against traditional tract-tracing experiments and correct images accordingly, Johansen-Berg noted.

The MGH/UCLA consortium hopes to generate even higher-resolution images. Wedeen, who co-leads the project, told the audience that a new Connectome scanner has a gradient strength of 300 mT/m, seven times that of conventional MRIs. Therefore, the scanner can acquire images in fewer milliseconds, providing a sharper signal because water has less time to wander. It will also reduce the scan times for participants, Wedeen said.

Wedeen shared some insights gleaned from DSI mapping to date. While neuroanatomy often looks confusing because of the crossing of multiple fiber pathways, the imaging resolved this into geometric order, showing that cortical fibers form smooth sheets that tend to travel in one of three perpendicular directions, forming a three-dimensional grid, Wedeen said (see Wedeen et al., 2012). These smooth sheets may reflect concentration gradients from embryological development, he speculated. Scientists have known for a long time that the cortex starts out as a flat sheet and crumples up during development into the deep convolutions of the adult brain. High-resolution microscopy also reveals that fibers typically make 90 degree turns rather than smooth curves when they need to change direction. This finding illustrates the power of the new machine to provide a more detailed anatomical understanding of the brain. Existing diffusion imaging methods cannot visualize these microscopic turns, Wedeen noted. Wedeen said he is impressed by the fixed patterns revealed by these scans. “The architecture of the brain is tremendously precise. This should be a huge asset for mapping and looking for changes in disease states,” he said.—Madolyn Bowman Rogers.