With 100 billion neurons, each signaling to roughly 7,000 others, the human brain bustles with mind-boggling activity. Yet within the hum of these sprawling networks, scientists are teasing out structural and electrophysiological underpinnings of an exquisitely complex process—memory. Using magnetic resonance imaging (MRI) and electroencephalography (EEG), researchers are finding what they call a “rich club”—a set of unusually interconnected brain regions—and learning how network patterns change with time (Part 1). Other brain imaging research ties memory function with structural connectivity and electrical oscillations in defined cortical regions (see Part 2). And additional studies—one using transgenic mice—home in on specific neural networks and show how their dysfunction weakens memory (see Part 3).

Just as certain individuals know lots of people and keep everyone up to date with the latest news, a small number of cortical “hubs” hook up with many other brain areas to coordinate the flow of information among them. Researchers have used MRI to correlate neural activity across these hubs (ARF related news story on Buckner et al., 2009) and trace physical connections among them (Hagmann et al., 2008), building a map of their connectivity. The hubs appear in several cortical subregions, including the posterior cingulate, lateral temporal, lateral parietal, and medial/lateral prefrontal areas (regions among the earliest affected in Alzheimer’s disease). In the November 2 Journal of Neuroscience, Martijn van den Heuvel of University Medical Center Utrecht, The Netherlands, and Olaf Sporns of Indiana University, Bloomington, took things a step further. Analyzing diffusion tensor imaging data from 21 young adults, the researchers discovered that brain hubs not only have more total connections, but “they tend to have more connections with their hub friends…in that sense, forming a collective, or so-called ‘rich club,’ in the brain,” van den Heuvel told ARF (see image below). He estimated that the hubs have 1.5 to two times more connections among each other than would be expected based on pure chance. “Having double the number of connections you should have is quite extensive,” van den Heuvel said. 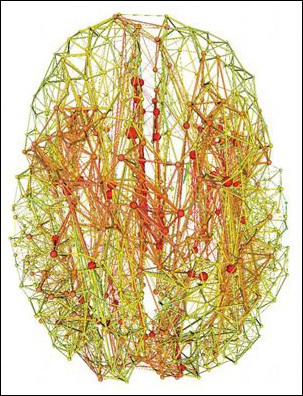 Magnetic resonance imaging data reveals areas of the human brain with the fewest (green) and greatest (red) number of connections. Well-connected “hubs” have a disproportionately high number of connections with each other. Image credit: Van den Heuvel et al. Journal of Neuroscience 2011

That got the scientists thinking about the potential impact of these dense hubs on disease. If likened to electric power grids, the rich club might “give a level of robustness to the network,” van den Heuvel said. “If one station fails, the others can easily take over because they are interconnected.” However, having a high concentration of connections carries some risk, too. As with the electric grid, if a major hub “goes down, it can take down others as well.” In a hypothetical model of the impact of targeted and random damage to neuronal networks, the authors determined that specific attacks on rich-club connections slowed information flow about three times more than harm to random parts of the network.

The findings may be relevant to Alzheimer’s disease. It is known that cortical hubs are hot spots of amyloid-β, and the rich club encompasses areas of the hippocampus, which is critical for memory and highly susceptible to AD pathology. “Alzheimer’s disease may, therefore, disproportionately affect the ability of other regions of the brain to interact with the hippocampus through its rich-club connections,” noted Trey Hedden of Massachusetts General Hospital, Charlestown, in an e-mail to ARF. The authors plan to apply their brain imaging protocol to AD and schizophrenia patients—“to see if their ‘rich club’ is less connected in memory areas,” van den Heuvel said.

The rich-club arrangement—where hubs associate more with each other than with less connected centers in a network—had already been described in other walks of life, such as the Internet. When the cortical hubs were mapped several years ago, Sporns and colleagues wondered whether they formed a rich club in the brain as well. The current study fits into a larger line of research aimed at producing a comprehensive map of all possible neuronal connections in the human brain (see Sporns, 2011 review), van den Heuvel noted. The Human Connectome Project is creating an interface to navigate such data.

Reporting in the same issue of JNS, researchers led by Mark Kramer of Boston University and Sydney Cash of MGH, Boston, also took a hard look at the brain’s structural layout—but with the added dimension of time. From 24-hour intracranial EEG recordings in six epileptic patients already undergoing invasive monitoring as part of their treatment, the scientists constructed functional networks and analyzed how they evolve over time. “What we found was moment-to-moment variability, yet a few functional network patterns that reappeared again and again,” Kramer noted in an e-mail to ARF. Granted, the intracranial EEG recordings only cover a limited part of the brain, and the spatial resolution of this technique is about 10 times worse than fMRI. On the flip side, fMRI has poorer temporal resolution (seconds rather than milliseconds in EEG), and practical considerations including scanner cost and access prohibit long-term fMRI recording. In the current study, similar network characteristics came up for all six patients despite differences in age, sex, and disease etiology, lending credence to the analysis. Furthermore, the findings seemed consistent with scalp EEG recordings in healthy people and in task-related EEG. The data suggest that just 100 seconds of continuous recording can provide “an indication of the brain’s functional connectivity network with high fidelity,” the authors write.

If a “metastable” pattern of brain interactions continually appear, Kramer speculates, “we can attempt to deduce these potential patterns of interaction from a few minutes of brain voltage data, and determine how these patterns alter during the course of aging or neurodegeneration.”—Esther Landhuis

This is Part 1 of a three-part series. See also Part 2 and Part 3. Download a PDF of the entire series.