This story ends with a glimpse of the newest kid on the block. Called 18F AZD4694, this radioligand does not yet have a mellifluous name (à la “flor…” “flute…”) that rolls easily off the tongue. It follows AstraZeneca’s equally numerical 11C ligand AZD2184, which is identical in structure to PIB save for a carbon-nitrogen substitution to reduce white matter binding. That 11C ligand is published and its performance looks strong as a research tool (Nyberg et al., 2009; Johnson et al., 2009); however, its 11C radio nucleotide limits its distribution and wide clinical applicability as much as PIB’s.

The 18F ligand made its first showing at the AD/PD meeting in the Czech capital of Prague last March, where AstraZeneca’s Samuel Svensson presented preclinical data (see ARF comment). Ever since then, rumor had it that it might actually be the best of the 18F bunch, but no clinical data were available up until now. 18F AZD4694 was absent from the HAI program, but at the 11th International Geneva/Springfield Symposium on Advances in Alzheimer Therapy last March in Geneva, Switzerland, that data finally came out. AstraZeneca’s Zsolt Cselényi presented on a poster the first results of the Swedish pharma company’s ongoing evaluation in people. It featured collaborative work with scientists at the Karolinska Institute in Stockholm, including Maria Eriksdotter Jönhagen and Christer Halldin. Also at Springfield, Eric Reiman of the Banner Alzheimer’s Institute in Phoenix, Arizona, presented his take on the Swedish data as well as the Banner group’s own investigation of this new ligand. Unlike AstraZeneca’s 11C compound, the 18F one is structurally quite different from PIB; in chemical parlance, PIB is phenyl benzothiazole, whereas AZD4694 is piridinyl benzofuran. 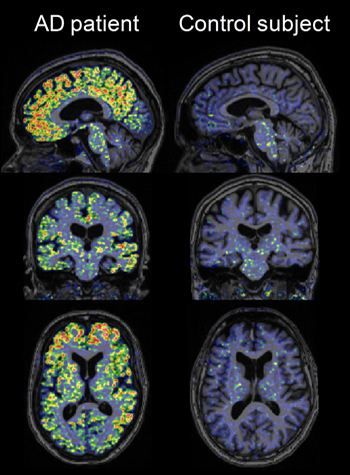 In the Swedish study, 10 people with mild to moderate AD in their fifties to seventies, plus six age-matched controls, underwent a PET scan after injection with this ligand; three AD patients and four controls repeated the same procedure later that day to check if the ligand performed consistently in what’s called test-retest. At Banner, Reiman and colleagues Dan Bandy and Kewei Chen tested AZD4694 in four people with very mild AD, five cognitively normal older adults, and one 23-year-old control.

Both presentations noted that AZD4694 rapidly sweeps into the brain and out again. Reversible binding peaked around 27 minutes after injection. This suggests that for routine clinical purposes, patients could get away with spending shorter periods of time—five to 20 minutes—in the scanner than is customary with the other ligands. The Swedish poster made this point, and Reiman confirmed it based on a different analysis of the Swedish data. AD patients can become anxious and disoriented in the scanner. The fast kinetics also imply that sites can start imaging some 25 minutes after the volunteer has received the injection, a shorter-than-usual wait.

A standard data representation in PET imaging called the time-activity plot showed a separation in how long the ligand remained in the cortex versus the cerebellum of an AD patient; in a normal control these curves overlapped. This, among other data, is considered evidence of specific binding. The compound did so in brain regions of interest in AD, including the prefrontal cortex, anterior and posterior cingulate cortex, and other areas. On the poster, plots of each person’s uptake values in the Swedish study, both by SUVR or DVR, for each of these AD regions of interest suggested showed no overlap between AD and controls in this small initial group of 16 people. With more use, this separation will likely blur somewhat because a fraction of cognitively normal older people are known to have brain amyloid, and occasionally, ostensible AD patients turn out to have been misdiagnosed. Indeed, among the Banner volunteers, this overlap already appeared. Reiman showed a plot of mean cortical SUVR, not split by region, but the point is it showed that the ApoE4 carriers among the cognitively controls retained AZD4694, one of them near the AD range and one in this range.

In Geneva, both Reiman and Cselényi showed that the ligand appears to bind white matter less than the field has grown accustomed to seeing from the other known 18F ligands. This enhances contrast between the specific labeling of amyloid plaques and the rest of the brain, making scans easier to read. White matter binding at times may complicate reading the scans a bit, Reiman said. (AZD4694 does bind non-specifically in the brain stem, however.) Indeed, images of AZD4694 in people with and without AD looked crisp to the unaided eye. The Swedish images delineated gyri and sulci of the cortical folds with a clarity not typically seen on amyloid PET scans. That wasn’t the doing of AZD4694 alone; these images were taken on a high-resolution research tomograph (HRRT) at the Karolinska Institute. Few neuroimaging labs worldwide have this cutting-edge machine available to them.

For his part, Reiman stopped short of endorsing AZD4694 just yet. Its low white matter binding in particular would appear to make it the ligand of choice for imaging small amounts of amyloid at the preclinical stage of AD, in ApoE4 carriers (see ARF related API story), and in presymptomatic carriers of eFAD mutations (see ARF related DIAN story). In the latter, this ligand might afford a fresh look at puzzling findings, whereby PIB scans differ significantly from scans of late-onset AD in showing strong striatal amyloid and relatively less cortical amyloid until later into the disease.

But Reiman emphasized that a clear answer to the question of where each ligand’s respective strengths and weaknesses lie could only come from a direct comparison of different ligands in the same AD and control participants and using the same imaging system, reference region, and image analysis techniques. “This new tracer has significant promise, and I am excited about it. But hold your horses until we see head-to-head comparisons,” Reiman said.—Gabrielle Strobel.