The feast of amyloid- and PIB-centric data at this year’s Human Amyloid Imaging (HAI) conference, held 24 April in Seattle, came with morsels of alternative fare reminding attendees that Aβ and Pittsburgh Compound-B may not have the last word in Alzheimer disease research. This story describes a few such presentations.

Though PIB has shown great promise as an in-vivo amyloid tracer in brain imaging using positron emission tomography (PET), it is conceivable the compound does not pick up the full range of pathological Aβ in the brain. That idea came through in a talk by Chet Mathis, of the University of Pittsburgh in Pennsylvania, who co-invented PIB with colleague Bill Klunk. To gauge the threshold of Aβ plaque burden needed for a positive PIB-PET signal, Mathis’s team measured Aβ load in postmortem brain tissue from two people: the woman with severe AD from a recent paper by him and colleagues (Ikonomovic et al., 2008), and a 79-year-old man diagnosed with dementia with Lewy bodies (DLB). The amount of amyloid required to detect a PIB signal in the AD patient was 0.3-0.4 μM, and in the DLB patient it was even higher (i.e., more than 0.8 μM). Furthermore, the PIB binding seemed to be qualitatively different in the DLB subject, Mathis noted in a post-meeting e-mail to this reporter. Despite a negative PIB-PET scan a year and a half before this man’s death, the researchers found substantial numbers of neocortical plaques (mostly diffuse) and moderate concentrations of insoluble Aβ1-42 peptide in his autopsy brain samples. This illustrates how PIB uptake could be misleading, by showing that PIB-PET scans can come out weakly positive despite extensive Aβ deposition. Furthermore, the mismatch between PIB signal and Aβ plaque numbers suggests that 11C-labeled PIB may be exquisitely selective for unique confirmations of human Aβ, Mathis said.

That notion seems to jibe with recently published work in non-human primates, and with HAI data presented by Jitka Sojkova, a postdoctoral fellow in Susan Resnick’s group at the National Institute on Aging in Bethesda, Maryland. In the former investigation (Rosen et al., 2009 and commentary), cortical extracts from aged squirrel monkeys, rhesus monkeys, and chimpanzees had markedly lower PIB binding compared with human AD patients, even though their brain extracts had AD-like levels of insoluble Aβ. In Seattle, Sojkova described her efforts to relate in-vivo brain amyloid imaging with neuropathological Aβ assessments in cognitively normal seniors. She and colleagues studied six people who were enrolled in the Neuroimaging Substudy of the Baltimore Longitudinal Study of Aging. In the people who had very low or very high amyloid load, PIB-PET imaging correlated well with neuropathology studies done on average 1.5 years after their last PIB scan. However, for participants with intermediate PIB-PET uptake, “it's more complex,” Sojkova said. “It depends on the region we are looking at, the time to autopsy, and many other issues.” These findings earned Sojkova this year’s HAI Young Investigator Award. The award was available to conference attendees enrolled in or less than five years out of graduate school, medical school, or residency programs, and came with a U.S. $500 cash prize.

Even before Mathis and Sojkova had presented their data revealing limitations of PIB, Marsel Mesulam, of Northwestern University Feinberg School of Medicine in Chicago, Illinois, had done his part to shake up the amyloid-centric focus of the day’s discussion. His keynote address began with a tongue-in-cheek remark, noting that since his first AD-related publication in 1976, “I’ve managed to keep my lab running without writing a single paper on amyloid and without proposing any grant related to amyloid.” He said that though the genetics of AD favors an amyloid-based pathogenesis, neuropathology argues that neurofibrillary tangles (NFT) are the prime villain as they have a much higher density in memory-related parts of brain (e.g., nucleus basalis, amygdala, hippocampus). In addition, tangles kill the neurons within which they form, and this cell death tracks with cognitive decline, he said. These features make neurofibrillary tangles “one of the most reliable biomarkers of the age-MCI-AD spectrum,” said Mesulam. “The same cannot be said about amyloid.”

In particular, Mesulam noted that the relationship of plaques to neuropsychological state is anything but clear-cut. “In some patients, plaques are latecomers, so they can’t be blamed for the emergence of memory loss,” he said. Other patients, however, rack up loads of brain amyloid yet stay sharp. This is what Mesulam found when he analyzed the brain of an 80-year-old woman in the university’s SuperAging study (ARF related news story). In a postmortem brain section from this “superager,” i.e., a person 80 or older who performs like a 50-year-old on neuropsychological measures, “I was able to find just a single tangle (thioflavin S staining in entorhinal cortex) but thousands of plaques,” he said. “The only thing I can say is that maybe the toxicity of amyloid is overdone.” Mesulam did note that his arguments against amyloid were based on studies of fibrillar Aβ, though the real culprit may be circulating Aβ oligomers. However, “no one has shown yet that these circulating oligomers increase with age,” he said. “None of the existing imaging agents today is in a position to image these circulating oligomers.”

Notwithstanding such caveats, the field does have in hand 18F-labeled compounds that perform reasonably well as fibrillar amyloid tracers. These should eventually find their way into widespread clinical use because of their ease of production and longer stability relative to 11C-labeled PIB. Florpiramine (aka 18F-AV-45), the only 18F compound with data at HAI, is being developed by Avid Radiopharmaceuticals, Inc. in Philadelphia, Pennsylvania. Thus far, it has not been compared head-to-head with [11C] PIB, Mathis wrote in a post-meeting e-mail to ARF. “But from the data presented to date,” he noted, “it appears that [18F] florpiramine has about twice the non-specific signal of [11C] PIB in white matter and about 80 percent of the specific signal that PIB has in high plaque containing areas of the cortex.” Mathis added that based on available binding data, it appears that florpiramine and PIB share the same binding site(s) on fibrillar Aβ40 and 42. In a recent review (Klunk and Mathis, 2008), Klunk and Mathis acknowledged that PIB will not be a mass product, and suggested comparing the various 18F compounds each to PIB as a way of determining how the newer agents stack up against each other. (See also Q&A with Mathis below.)

A Phase 2 trial of [18F] florpiramine was completed in November 2008. As described on a poster at HAI, three trials at 20+ centers, totaling 93 healthy controls, 63 people with a clinical diagnosis of AD, and 60 with MCI, showed that 75 to 80 percent of AD subjects had high florpiramine binding on visual read, as did 40 to 50 percent of MCI cases and 15 to 30 percent of healthy controls. Ongoing trials are testing how this compound fares as a biomarker to detect amyloid changes induced by a number of experimental AD drugs, e.g., Pfizer’s 04494700, an oral compound formulated to prevent amyloid-β from binding to the RAGE receptor (receptor for advanced glycation endproducts), and Eli Lilly’s γ-secretase inhibitor, LY450139, aka semagacestat. Florpiramine is also being used in a study that will compare regional amyloid burden in Parkinson disease (PD) patients and normal seniors; in a Phase 3 study aiming to correlate [18F] florpiramine PET imaging and brain amyloid pathology; and in an observational study to determine if [18F] florpiramine PET scans can predict 18-month cognitive decline in healthy elderly and people with MCI or AD.

At HAI, Dan Skovronsky of Avid reported that APOE genotype influences amyloid burden, as measured by PET imaging with [18F] florpiramine, in MCI and AD patients as well as in cognitively healthy elderly. These results are consistent with preliminary data presented at HAI by John Morris. They also confirm a recent study of 28 non-demented seniors showing that fibrillar Aβ load as determined by PIB-PET imaging tracks well with AD genetic risk based on APOE genotype (ARF related news story and Reiman et al., 2009).—Esther Landhuis.

All attendees are invited to send additions and corrections to esther@alzforum.org.

Q: Has it been determined that an 18F compound will be used in ADNI 2? If so, which one is the leading prospect?
A: Yes, an 18F-labeled amyloid tracer will be used in ADNI 2. No 11C-PIB studies are planned for ADNI 2 at this time. Avid's 18F-AV-45 is presently the lead candidate for ADNI 2. While Avid has been willing to give access to their tracer for ADNI 2 studies, GE Healthcare and Bayer/Schering decided not to give access to their tracers. AstraZeneca indicated that they would make their 18F-labeled tracer available to ADNI 2, but few people have seen AZ's data. They will present at ICAD this July. So Avid is the front-runner for ADNI 2 amyloid imaging studies at this time.

Q: Based on the data so far, how do 11C PIB and 18F-AV-45 stack up against one another in terms of 1) sensitivity/reliability (i.e., what they detect) and 2) ease of use (e.g., availability, cost, and what's involved on the part of patients and staff)?
A: There have been no head-to-head comparisons yet. But from the data presented to date, it appears to me that AV-45 has about twice the non-specific signal of PIB in white matter and about 80 percent of the specific signal that PIB has in high plaque-containing areas of the cortex. So it is somewhat inferior to PIB, but it may be good enough for the job at hand. We shall see.

As for ease of use, AV-45 has clear advantages over PIB. It likely will be manufactured at a number of central locations and shipped to all of the ADNI sites that conduct PET studies (about 50 sites). PIB is only manufactured on-site at 12 ADNI sites. So including AV-45 in ADNI 2 could quadruple the number of PET sites doing amyloid imaging. That's a clear advantage that any 18F-labeled tracer has over any 11C-labeled tracer.

Q: Do you have a diagram that shows the chemical structure of the tracers in contention? 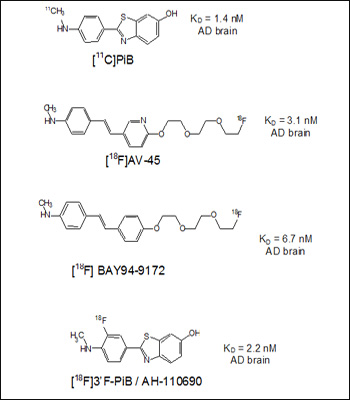 Note that PIB has the highest affinity and the Bayer compound the lowest (highest Kd). One atom, a nitrogen in the aromatic ring, separates AV-45 from the BAY94-9172 structure. Note also that the Bayer compound used to be called AV-1, until Avid licensed it to Bayer, so their similar structures are not a coincidence.

Q: Is there published data on AV-45?
A: At the present time, there is no peer-reviewed paper on AV-45 in the scientific literature. There are numerous abstracts and oral presentations on AV-45, but no published manuscripts. There are now more than 70 peer-reviewed literature papers on PIB. AV-45 has been in human use for about two years now.

Q: What happened to AV-1 (BAY 94-9172) and GE Healthcare’s 18F-labeled PIB derivative AH110690 (see ARF related news story)? Are these compounds still in the running or is most of the focus/energy going toward AV-45?
A: Both are still in the running of clinical trials. Bayer/Schering's compound was in Phase 2 studies some months ago. I haven't heard if they are completed. GE's compound finished Phase 2 trials and according to GET will enter Phase 3 trials in a few months. The two companies have decided to maintain "control" of their compounds by not making them available to ADNI 2. This is fairly standard for big pharmaceutical companies. Avid is a smaller, venture-funded company, hence in a different situation.