In any social circle, there are always one or two key people who seem to be the center of the action. They have many friends, keep up with everyone’s news, remember birthdays, and instigate events. Social psychologists and network theorists give these butterflies the designation hubs because they link otherwise disconnected people to each other and provide the glue that keeps the group together. As it turns out, the brain also has hubs—regions in the cortex that reach out and touch many otherwise separate processing units. The hubs function to coordinate and integrate the workings of different parts of the brain.

Using functional MRI (fMRI), Randy Buckner, with Reisa Sperling, Keith Johnson, and colleagues, all at Harvard University, have mapped in fine detail a small set of cortical hubs, regions that are the most highly and stably connected to other parts of the brain. What’s more, they show that in patients with Alzheimer disease (AD), the pattern of amyloid accumulation tracks to these hub areas. The work, published February 12 in the Journal of Neuroscience, suggests that the intrinsic network architecture of the brain may be part of the reason why certain areas accumulate amyloid. One possibility is that the hubs represent regions of intense neuronal activity and/or metabolism that promote Aβ production, a conjecture that remains to be proven.

To find the hubs, Buckner and colleagues analyzed spontaneous fluctuations in the fMRI BOLD (blood-oxygen-level dependent) signal across the brains of healthy young adults. The measure of functional connectivity is defined by a voxel-to-voxel correlation in the BOLD signal in different brain regions over time. The researchers looked for regions that had the most correlation with multiple other parts of the brain, and identified a set of hubs in the posterior cingulate, lateral temporal, lateral parietal, and medial/lateral prefrontal areas of the cortex. The hubs showed up whether the subjects were resting or were performing a challenging word test, suggesting that they are a stable part of the brain architecture. By pooling fMRI data on 127 subjects, the researchers generated a consensus reference map of the cortical hubs.

The second part of the study compared the distribution of hub activity to that of amyloid in people with AD as measured by PET imaging using Pittsburgh compound B (PIB). The results showed a visually apparent and computationally significant correlation between the two. 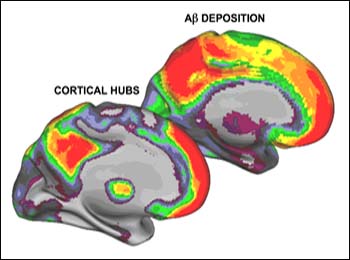 The new work says something slightly different. The strong correlation between amyloid deposition and hub activity suggests that Aβ deposition does not depend on what the brain is doing in terms of cognitive work, but instead is a feature of the underlying architecture of the brain. The hub areas show the greatest fluctuations in BOLD signals at all times, and, Buckner said, “The assumption is that those signals are related to high levels of metabolism and high levels of net activity.”

The relationship between BOLD oscillations, neuronal activity, and Aβ production remains to be demonstrated, but Dennis Selkoe of Harvard Medical School favors the same model. “I do believe this provides further indirect evidence for neuronal activity increasing Aβ generation via activity-dependent processing of APP, in accord with the nice work of John Cirrito and colleagues in recent years,” Selkoe told ARF (see, e.g., Cirrito et al., 2005).

If hub activity relates directly to Aβ production, then this raises the possibility that individual variations in connectivity could be a risk factor for AD, or that known risk factors might affect hub activity. This will be a focus for future work, as Buckner explains further in a Q&A with ARF (below).—Pat McCaffrey.

Q: How did you conduct this study, and what does it show?
A: Our basic approach was to identify regions of the brain that show disproportionately high numbers of connections to other brain regions. We sought to identify the way stations of information processing in the brain. The brain has a number of specialized systems. Anatomists such as Marsel Mesulam and others have long postulated that there are special regions, called heteromodal areas or association cortex, that connect many of these specialized brain systems together, and this might be why we are able to think thoughts that rely on multiple systems, and how we are able to integrate visual and auditory information. In our paper, we specifically looked for the regions of the brain that are most connected—we call these hubs because they have numerous connections to diverse areas of the brain.

The way we did this is to look at the spontaneous or intrinsic activity in the brain, which has been a focus of many recent research papers on AD such as from Michael Greicius' lab at Stanford. In this case we used spontaneous activity as a tool to look at connections, because we think that these spontaneous activity events cascade among anatomically connected regions. So if you want to understand which regions are anatomically connected and which ones have the most connections in the human, characterizing intrinsic activity networks provides a reasonable approach. To do this, we took a large group of research volunteers and simply made a map of those cortical regions that showed the most connectivity across the rest of the brain. Using this approach we were able map the brain’s cortical hubs.

Q: What does the connectivity map look like?
A: The first important finding was that there is a network of regions that are the most connected in the brain. We did not know in advance what to expect, although we had our suspicions based on classic work by anatomists who have characterized areas of association cortex. We discovered that the network of regions that was disproportionately connected was highly similar to the default network, those regions which are most active when people think to themselves, as compared to doing an active task.

Q: Why is that?
A: Why do we use these heteromodal hubs when we think to ourselves more than other systems such as sensory systems? That’s an interesting question and we briefly write about it in a few paragraphs of the paper. What this study tells us is that the regions of the brain that we spontaneously use when we think to ourselves are also those that are convergence zones. We really do not have a good answer yet as to why the two converge on the same network. But even without a clear answer, I suspect it is not a coincidence.

Q: And the connection to Alzheimer disease…?
A: Using amyloid imaging based on PIB, we were further able to show that there is a strong correlation between the map of these hubs and where amyloid deposits in Alzheimer disease.

This is related to our earlier work on the default network in some ways—showing a relationship between the topography of the network in young adults and the development of AD—but extends it in an important way. In the past we had been focusing on different cognitive states such as thinking to ourselves as the possible origin of why these regions that show heightened activity and metabolism may be conducive to AD, but this work now shows that it may be a more fundamental property of the network’s architecture that leads to the heightened activity and heightened metabolism. The network contains regions that are highly interconnected across the brain and show the highest level of fluctuations on fMRI most of the time, during rest states and also during task states. That is, while the activity fluctuations in these regions are heightened during rest, they persist during active states as well. This property may lead to high levels of neuronal activity and high levels of metabolism. I would like to see cellular-level work in this area to help us understand better the relationship between these regions of high functional connectivity and tonic activity or heightened metabolism.

Q: Is the idea that the high neuronal activity leads to enhanced APP processing and production of Aβ?
A: Yes, that is what the extraordinary work from Dave Holtzman’s lab at Washington University, and John Cirrito’s work in particular, has taught us. Using a transgenic mouse model of AD, they demonstrated that transient changes in neuronal activity lead to increases in Aβ (Cirrito et al., 2005; [Editor’s note: see also Brody et al., 2008]). I suspect that these are all related observations, but we need further study to help establish what the relationships are.

Mark Mintun and Marc Raichle, also from Washington University, presented findings a few years ago at the Society for Neuroscience meeting that suggest glycolytic metabolism may play a special role in deposition of amyloid. It will be interesting to explore whether heightened activity in the functional connectivity hubs is what underlies regional differences in glycolysis. Pathways associated with glycolytic metabolism may reflect a related, or even alternative, route by which activity hubs might influence the progression of Alzheimer’s pathology.

Q: What are the ramifications of that for thinking about AD in terms of diagnosis or treatment?
A: The work of Michael Greicius at Stanford and Cindy Lustig at the University of Michigan has already shown that you can use disruption of this network as a marker for AD (Greicius et al., 2003; Greicius, 2008; Lustig et al., 2003). Our new work may help to understand why this network and this particular set of connectivity paths are related to amyloid deposition and subsequently to disruption of the network. This may help to answer the question of why these regions are particularly vulnerable and why their disruption may be a marker for Alzheimer disease.

Our findings also raise another important possibility that relates to risk for AD. We are presently exploring whether there are differences between people in these functional connectivity patterns. It is possible that the measure developed in the paper, which is effectively a measure of the pervasiveness of functional connectivity in the brain, may differ across individuals. If it does, we would like to know if those differences relate to genetic factors that affect how the brain is wired during development. And, if there are genetic factors that relate to these patterns of connectivity, are they risk factors for AD?

Q: Any insights about treatment?
A: Understanding pathways that link activity and metabolism to amyloid deposition, or other cascades that are involved in Alzheimer neurotoxicity, will hopefully identify targets that one can manipulate. Based on our findings, one can imagine that future preventative treatments might target early life events that tweak the relationship between brain activity and APP production or brain activity and other cascades important to AD. The findings we report and those recently emerging from other laboratories push us to consider the possibility that normal lifelong cellular processes modulated by brain activity are the foothold for Alzheimer disease.

Current treatments have focused on the late-stage processing of APP and the deposition of amyloid-β. What we are seeing is initial evidence that there might be earlier stages of the process that could yield treatment candidates, although we have not yet identified what those candidates might be.