This mutation was found in a screen for variants in the open reading frame of the PSEN1 gene in participants from the U.S., Germany, and Canada who had been referred for AD diagnostic testing (Rogaeva et al., 2001). The cohort included 372 patients with AD and 42 asymptomatic individuals with a strong family history of AD. Evidence for co-segregation of this mutation with disease is not available. In a subsequent study, a French individual with AD age at onset of 41 years was reported (Zarea et al. 2016). This patient developed seizures three years after disease onset.

Biological Effect
An in vitro assay using purified proteins to test the ability of this mutant to cleave the APP-C99 substrate indicated relatively little impact on the total cleavage activity of γ-secretase, but a nearly fourfold increase in Aβ42 production resulting in an elevated Aβ42/Aβ40 ratio (Bai et al., 2015;  Sun et al., 2017). The mutation is located in transmembrane helix 3, and in silico analysis suggests it changes the shape of this region’s surface and its electrostatic properties (Zekanowski et al., 2006). Cryo-electron microscopy studies of the atomic structure of γ-secretase bound to Notch or APP fragments indicate F177 directly interacts with residues from Notch, but not APP (Zhou et al., 2019; Yang et al., 2019; Jan 2019 news). Two other mutations at this site, F177S and F177V, have been reported in individuals with a strong family history of AD.

Although some in silico algorithms to predict the effects of this variant on protein function yielded conflicting results (Xiao et al., 2021), the CADD-PHRED tool, which integrates diverse information, gave it a high deleteriousness score above 20 (CADD v.1.6, Sep 2021). 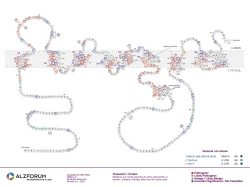