This mutation was reported in a three-generation family. As described, the "F19" pedigree had 10 affected individuals who met the NINCDS-ADRDA criteria for probable AD. The diagnosis was confirmed by autopsy in at least one family member. The average age of onset in this family was 59 ± 4 years (Chartier-Harlin et al., 1991). Additional screening of the APP gene in this family did not reveal any additional sequence abnormalities, supporting the pathogenicity of V717G. Moreover, the mutation was found in three affected carriers and was absent from 10 unaffected members indicating cosegregation with disease (Fidani et al., 1992).

This mutation was later identified in a woman from the United Kingdom considered to be affected by sporadic early onset AD. She met clinical criteria for probable AD, with onset at age 61. Additional clinical details were not reported (Barber et al., 2015).

Neuropathology consistent with AD was seen at autopsy in at least one mutation carrier (Chartier-Harlin et al., 1991). 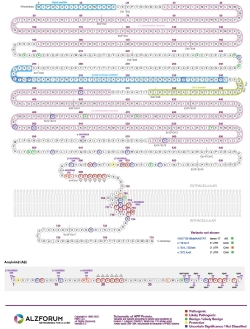