The Alzheimer Disease Neuroimaging Initiative (ADNI) is the largest AD study the National Institutes of Health have ever funded. Announced in October 2004 and set to run until 2010, this public-private consortium has engaged 59 research centers in the U.S. and Canada in a massive effort to follow 821 research volunteers for three years. The year 2005 went by preparing sites, building informatics tools, and enrolling the first patients, 2006 and 2007 were spent enrolling and seeing patients, and now in 2008 waves of data have begun flooding in. In terms of data gathering, the study is nearing its midway point. In terms of analysis, it is only scratching the surface of what is yet to come; hence, drawing major conclusions would be premature. Still, the beginning of ADNI’s final year is a good moment in time to take its pulse and peek at the preliminary scientific trends that are beginning to emerge. 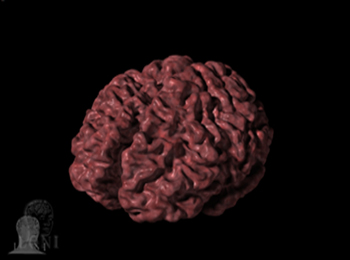 As of now, seven papers on ADNI results have been published, two dozen manuscripts are submitted, some 60 abstracts dealing directly or indirectly with ADNI were presented at the recent International Conference on Alzheimer’s Disease (ICAD) last July in Chicago, and 300 investigators from across the world have downloaded ADNI data for their own analysis. Add-on studies for genetics and amyloid imaging are plugging along; neuropathology validation is set up and awaiting cases. ADNI has built on the clinical infrastructure established previously by the Alzheimer’s Disease Cooperative Study (ADCS). Pharmaceutical companies developing AD drugs have implemented ADNI methodologies in their newer clinical trials. Early data are confirming the main findings of many prior, much smaller imaging and biomarker studies. Early statistical calculations are already hinting that CSF and imaging markers have more power than clinical methods to measure disease progression. Baseline results on the normal control subjects indicate that some of them might have preclinical AD; these data warrant close observation of this population for years to come. ADNI scientists are beginning to plan for a hoped-for expansion, aka ADNI2. Finally, ADNI has caught on around the world, with similar efforts underway in Australia, Japan, Europe, and China. For more on each of these points, read our ADNI 2008 series.

This website has covered the motivation behind ADNI and its major purpose when the study started (see ARF related news story). ADNI itself has an informational website that offers a wealth of freely downloadable slide presentations, protocols, and other materials on ADNI’s organizational structure, goals, and related activities. In brief, ADNI is a longitudinal, observational study that tracks how various measures of structural, functional, and amyloid imaging, as well as fluid biomarkers, change over time in people who enter the study either cognitively normal or with a diagnosis of mild cognitive impairment (MCI), or AD. ADNI compares a host of candidate imaging analyses and biomarkers side-by-side in the same study population, and will relate each marker’s change over time to show how that person’s cognitive and clinical stage also changed over the same period. This can move the field past its current stage, where single-center studies tend to use different ways of acquiring and analyzing data on different candidate biomarkers in different, smaller sets of people. “The literature is full of reports of the value or technique X or method Y in tracking progression or in diagnosis; however, it is difficult to compare reports because the subject groups are always different,” Nick Fox wrote to ARF. Fox is at University College London, the only non-U.S. ADNI preparation and analysis center. ADNI aspires to help the field anoint consensus biomarkers that the pharmaceutical industry and ADCS will incorporate into their therapeutic trials. The goal is that drug trials will eventually treat validated biomarkers of AD instead of treating cognition with its noisy outcome measures. That would cut the cost and length of drug trials and make prevention trials of presymptomatic AD practical (see ARF related news story). 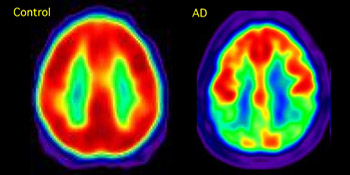 A Composite Picture of Glucose Metabolism Using PET and the Tracer FDG
The AD patient on the right shows reduced glucose metabolism in temporoparietal cortex, a hallmark of the disease and a potential biomarker that is being explored in ADNI. Image credit: William Jagust

Inspiration for ADNI
Neil Buckholtz, who heads the Dementias of Aging program at the National Institute on Aging (NIA), is widely credited with spearheading support for ADNI by bringing different stakeholders together. In discussions with researchers from pharmaceutical companies as early as the mid-1990s, one problem was even then that the companies wanted to develop disease-modifying drugs for AD but had no guidelines from the FDA on how to show if such drugs worked. “We thought it would be useful to serve as a broker between pharmaceutical companies and academic scientists to develop the best instruments and methodologies to measure change over time, so that companies could later test if their drug modifies that progression,” Buckholtz recalled. Because this goal addressed a problem that bedevils all drug makers in the field, it fell into what is called “precompetitive space.” This buzzword denotes areas of common ground where companies that compete fiercely around their products can invest jointly, and even collaborate closely, to generate a set of data that is open to every player in the field. “The ability to standardize imaging approaches, to identify patients early in disease, and to monitor treatment with disease progression markers are hurdles shared across pharma, and ADNI has provided solutions to some of industry’s more intractable problems,” commented Holly Soares of Pfizer, a member of ADNI’s industry advisory board.

To build a public-private consortium, Buckholtz engaged the Foundation for the National Institutes of Health, which was set up by Congress to be able to solicit funds from private groups (the NIA itself cannot do that). The Foundation for the NIH raised money from more than a dozen pharma companies as well as the Alzheimer’s Association and the Alzheimer’s Disease Discovery Foundation (see also ADNI Sponsors), and transferred it to the NIA. The institute used it to fund a grant submitted by Michael Weiner of the University of California, San Francisco, ADNI’s principal investigator. Forty million dollars of that grant came from NIH, and about $24 million through the Foundation of the NIH. By summer 2008, the number of companies in the private consortium had grown to 15. It has supported extensions and add-on studies (see Part 5 of this series, and below). Foundation staff has helped identify industry partners for ADNI and organized a symposium to support communication between the ADNI consortium and regulatory agencies.

ADNI’s industry sponsors each dispatch a representative to an advisory board that supports the overall study, and they also have liaisons to individual ADNI cores, i.e., the scanner manufacturers to the imaging core, the bioassay company to the biomarker core, pharma companies to the clinical core, etc. Dubbed ISAB, this board lends its expertise to the design and execution of ADNI and its add-on studies. Their work is more than nominal. They meet once a month by phone and twice a year in person. For example, the board helped with developing best practices, guidelines, and standard operating procedures—the nitty-gritty stuff that is often boring to the academic investigator but that can sink multicenter studies. Moreover, the ISAB played a role in expanding the CSF component of ADNI from its original target of one fifth of participants to more than half of participants. It helped the clinical sites do that by developing short videos based on prior data Elaine Peskind at University of Washington, Seattle, had generated. Those videos on the one hand featured use of a smaller needle and generally trained clinical staff to conduct standardized lumbar punctures well, and on the other offered education that helped dispel misconceptions about lumbar puncture among volunteers. The private consortium then funded an ongoing extension of the original CSF study, which had planned to collect baseline and year 1 time points, to collect year 2 and 3 samples, as well. “The partnership has worked very well,” Buckholtz said. “The industry partners provide intellectual input. They do not push ADNI to their individual advantage.”

Importantly, ADNI data are open and freely accessible to a degree that is unprecedented in AD research. The study has an informatics core headed by Art Toga of the University of California, Los Angeles. Part of Toga’s charge was to build systems that make it possible for all 59 participating ADNI centers to upload their data to UCLA’s Laboratory of Neuro Imaging, and likewise, for any external scientist around the world who wants to analyze ADNI data to download it from the LONI site. ADNI’s clinical and neuropsychology data are available there, as well as its biomarker and imaging data. More than 32,000 MR and PET scans currently are on this site, and some 300 investigators have downloaded 340,000 images already, Weiner said during a lecture at ICAD. In addition, genetic data will be uploaded this October, according to Andrew Saykin of Indiana University School of Medicine, Indianapolis, who heads the genetics add-on studies, and some imaging data from the Australian AIBL study will follow in early 2009 (see Part 6 of this series).

ADNI is the first Alzheimer’s research study where scientists sitting at their computer anywhere in the world can obtain the data, analyze it, and then publish their results, without having to see a patient or tapping into a clinical system. “It is very easy to do a query and download images and associated cognitive and lab data,” wrote Sterling Johnson of the University of Wisconsin. “This accessibility reflects a shift in the way scientists think about the boundaries of data ownership. It also reflects the urgency we all feel about the growing problem of AD as the population ages, and the lack of effective interventions.” Beyond data, biofluids can be made available to non-ADNI scientists, as well. This access is tightly managed, however, because the fluids are precious and limited. ADNI’s resource allocation review committee welcomes requests, and assesses each individually.—Gabrielle Strobel.