One goal of ADNI is to make clinical trials sharper. To that end, scientists are running power calculations for hypothetical trials. In essence, they play a “what if” game to see by how much inclusion of a given biomarker or type of imaging would reduce the number of participants needed in each arm of a trial of a disease-modifying drug, for example, a trial designed to detect a 25 percent slowing of cognitive decline. These estimates, in turn, use calculations of how many people need to be in each arm to detect a corresponding change in the given biomarker/imaging modality. At present, these exercises are using data from repeat scans at baseline and year 1. ADNI’s lead biostatistician Laurel Beckett of the University of California, Davis, explains: “This is one way of putting the different measures on the same scale. If you believe that change in the measurement is bad clinically, and you have a treatment that will slow it down, how large a study do you have to do to provide persuasive evidence that it works? The 25 percent reduction is arbitrary; we could have chosen 33 or 50 percent. The larger the reduction we think we can get, the smaller the study we need. It's a lot easier to spot huge effects than modest ones. But it's also easier to spot effects if you have very stable, steady change, rather than up-and-down, noisy, good-day, bad-day sort of paths. So this analysis basically asks: how strong is the “signal” for change compared to the “noise,” but measures the strength of the signal by how easy it would be to detect a change in the signal.”

Consider this example. Using the ADAS-Cog, a 25 percent trial would need 467 people with AD, or 1,982 people with MCI per group. Using the CDR sum of boxes, those numbers drop to 424 AD patients and 764 with MCI. However, detecting 25 percent change in certain MRI measures (such as Freesurfer, boundary shift integral, or certain white matter changes) would only require some 50 to 100 AD cases or about 100 to 150 MCI cases per group. In functional imaging so far, only an analysis performed by the Arizona group appears to slash sample size significantly (160 per group in AD, 626 for MCI), scientists reported at the International Conference on Alzheimer’s Disease (ICAD) last July in Chicago. “We already see that imaging methods have much more statistical power than clinical methods to measure change,” Michael Weiner of University of California, San Francisco, wrote to ARF. 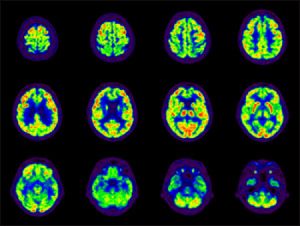 And it’s not just imaging. Also at ICAD, Mike Donohue, a biostatistician at UC San Diego, presented a similar exercise where he used the publicly available ADNI data to see if incorporating its measures as baseline covariates would increase the power of a trial geared toward detecting a 30 percent dent in ADAS-Cog worsening. Donohue reported that the needed group sizes would be significantly smaller if the trials included baseline measurement of the volume of the temporal lobe or the hippocampus, or the CSF tau/Aβ42 ratio. Even outside of ADNI, power calculations are catching on. Also at ICAD, in the last hour of the conference, David Holtzman of Washington University in St. Louis, Missouri, updated the audience on his center’s ongoing studies combining CSF biomarkers and imaging to predict rates of clinical decline in cognitively normal or very mildly impaired people (see below). In the course of this talk, Holtzman noted that the WashU data support calculations, whereby prevention trials powered to detect a 50 percent effect size would need only half as many participants per arm if they selected people by their low CSF 42 values versus merely enrolling people with the lowest detectable clinical dementia rating (CDR of 0.5).

Spinal Fluid Spills Its Secrets
ADNI’s biomarker effort is the largest biofluids study done in AD so far. It is collecting CSF at baseline, year 1, 2, and 3 in a subset of participants. (It is also collecting plasma and urine, but their analysis is less advanced.) At this point, the biomarker core lab has uploaded to the LONI baseline data on all 416 participants, that is, their CSF Aβ42, tau, phospho-tau concentrations, and the tau/Aβ ratio. The 56 ADNI sites that are performing lumbar punctures are presently collecting year 2 samples, while the biomarker core scientists are analyzing year 1 data and the few year 2 measurements that have already come in, said Leslie Shaw of the University of Pennsylvania Medical School in Philadelphia, who co-directs ADNI’s biomarker core together with John Trojanowski. Already available at this point, from interviews, ICAD presentations, and slide presentations at adni-info.org, are the results of the baseline data compared with people’s diagnoses, and with information of whose diagnosis has changed since baseline.

This analysis first established cutoffs for normal versus pathological values in the markers by running the ADNI assay in a separate UPenn cohort of autopsy-controlled cases who had donated CSF samples prior to death. Using those cutoffs in the ADNI sample, the scientists then showed that of all CSF markers tested, CSF Aβ42 best characterized the groups. Moreover, of the 37 ADNI participants to date who had entered the study with an MCI diagnosis but had progressed to AD by year 1, 34 at baseline had a pathological CSF signature of low Aβ42/high tau and phospho-tau. This signature, then, would appear to predict conversion from MCI to AD and may help sort participants of future MCI trials. About three quarters of people in the baseline MCI group had this signature. Overall, the ADNI CSF study appears to support what smaller studies have shown before (e.g., Hansson et al., 2006). “The findings have confirmed and extended data that suggested measures of brain volume, amyloid load, and CSF biochemistry may be combined to sort those subjects with extremely mild symptoms (MCI) who will progress to full symptomatic AD within a relatively brief time (one to two years) from those who will show no clinical deterioration,” commented William Potter of Merck Research Laboratories.

The second insight that raised eyebrows is that up to half of the 229 normal controls enrolled in ADNI might not be aging so normally. Instead, the data suggest “that some of them have signals of early, preclinical AD,” Weiner wrote to ARF. Shaw agreed: “The group that many of us have been considering as true controls in the sense of comparing disease versus non-disease is probably not a true control.” This sense emerged from a first peek at several related datasets. For one, Beckett presented at ICAD that while the normal subjects overall had no clinical/neuropsychological changes between baseline and year 1, their brains were changing subtly. Many of them had noticeable brain atrophy, hippocampal atrophy, and ventricular enlargement. Intriguingly, the brain shrinkage correlated with the biochemistry in that those people who fell into the lowest quartile of CSF Aβ42 concentration at baseline also had the fastest changes. These folks were not older than the other normal controls, but they did have more ApoE4 carriers among them.

ADNI has no data yet to say whether this is aging or foreshadows cognitive decline; smaller studies at individual institutions, for example, WashU, would suggest the latter. According to Chet Mathis at the University of Pittsburgh School of Medicine, who heads the amyloid imaging substudy, almost 50 percent of ADNI normal controls are PIB-positive. According to Shaw, some 40 percent of that group have a pathological biomarker signature (i.e., low CSF Aβ42/high tau). Here again, ADNI confirms prior results by Tom Montine and colleagues at University of Washington, Seattle, by Erik Stomrud and colleagues, and also by Anne Fagan and colleagues of Washington University, St. Louis, who have argued for some time that this CSF signature represents a biological red flag of future AD in cognitively normal elderly people (Li et al., 2007; Stomrud et al., 2007; Fagan et al., 2007). This ADNI result also confirms older neuropathological findings that up to 40 percent of cognitively normal people in their seventies have “preclinical” Alzheimer disease in their brain (e.g., Price and Morris, 1999).

MRI—CSF—amyloid imaging: are all these measures abnormal in the same people? In response to this question, Beckett wrote “The numbers here are small and we have not looked at all the associations yet, but at least in part, yes.” She cautioned that none of these data in normal controls can yet be tied to clinical change on ADAS-Cog or MMSE, though subtle changes might show up in certain highly sensitive tools, for example, timed performance tests. “Whatever is going on here, and it's very provocative, is all still under the radar from a clinical perspective.… This is, to my mind, one of the very most exciting parts—it's like reading the opening chapter of a gripping thriller, and then finding that it is ‘to be continued.’”

Future of ADNI
The next two episodes (year 2 and 3 data) will come before long. Beyond that lies a second season, in other words, ADNI2. Hopes for a continuation are high, though nobody knows if the funding for it will come through. At this point, ADNI investigators are thinking toward a grant submission in the fall of 2009 by discussing what shape ADNI2 could take. One priority many scientists expressed was to follow the current normal control and MCI groups past three years, and to enroll new normal controls in order to find out in which sequence predictive imaging and biomarkers changes appear in a still-healthy person. A related goal is to try to close the gap between true normal aging and MCI by identifying a more mildly impaired group or high-risk groups. Part of this can be done based on the results of ADNI, which already appear to define a presymptomatic stage characterized by a combination of risk factors, such as ApoE4, brain amyloid, pathologic CSF Aβ/tau, reduced FDG-PET signal in posterior cingulate, and shrinkage of the hippocampus.

An ADNI2 would include an 18F amyloid imaging from the start, though just how sensitive the 18F tracers are at picking up the very earliest signals in clinically normal people remains to be ascertained. Fluid biomarker and proteomic analyses would be expanded. ADNI2 would contain a genetics core to build on the work of the current ADNI genetics working group.

At ICAD, Weiner told the audience that ideas for ADNI2 are welcome, and that now is the time to formulate them. “Other areas worth exploring include additional cognitive batteries and functional instruments, or computerized batteries (see ARF related news story) suited for early patients, simplified screening tests that could be used by primary care practitioners, and measurement of peripheral markers that may indicate an AD phenotype or predict progression,” wrote Michael Grundman of Elan Pharmaceuticals in South San Francisco. For his part, Merck’s Potter added that the ISAB is working with colleagues in academia, at the NIA and FDA, to define the value of an ADNI2 effort to better understand how to identify early subjects, and that these issues will dominate a meeting later this month. “Coupled with this is an exploration of whether a regulatory path could be established for bringing forward a preventive treatment based on biomarkers, with a post-marketing requirement to establish definitive evidence that subjects are protected from emergence of symptomatic AD as currently diagnosed,” Potter wrote.—Gabrielle Strobel.