Fiendishly complicated, γ-secretase inspires both awe and weariness. Biochemists with an appetite for structure-function studies marvel at its intricate design; indeed, they thrive in the hip new subfield of RIP/I-CliP research that this protein complex of 19 transmembrane domains has helped inspire. (Spelled out, the acronyms, less elegantly, mean regulated intramembrane proteolysis/intramembrane-cleaving protease). At the same time, colleagues of pathological, genetic, or clinical persuasion silently wonder how much hardcore enzymology they have yet to endure to stay abreast of this part of their field. No matter where they are coming from, though, scientists agree that (along with β-secretase) γ-secretase remains a pivotal subject of AD research, and the Keystone conference held 24-29 March in Keystone, Colorado, offered new insights on just how it might work. Presentations addressed its structure, its sensitivity to lipids, and the way in which mutations causing familial Alzheimer disease corrupt its activity. Here is a summary of new data on these three issues, presented by three groups in the field.

Takeshi Iwatsubo of the University of Tokyo, Japan, presented the latest data from his group’s ongoing effort to glean indirect peeks at the structure of γ-secretase. A structure-based understanding of the enzyme would offer a starting point for drug development, much like it did for HIV protease. Ideally, a definitive view might come from atomic-level crystal structures of γ-secretase bound with substrate or inhibitor molecules; alas, given the size and complexity of this membrane protein complex, no one expects such structures anytime soon, even though numerous labs are working on the problem. Electron microscopy images of γ-secretase have given some hints about where water might enter its hollow inner cave, but otherwise reveal nowhere near enough detail (Lazarov et al., 2006; Ogura et al., 2006).

In the meantime, the challenge is to gather biochemical clues against which any future crystal structure can be validated. Using cysteine scanning mutagenesis, cross-linking, and inhibitor studies, Chihiro Sato, Shizuka Takagi (see image below), and Taisuke Tomita performed an arduous project toward this goal that drew praise from conference attendees. Such indirect methods of structure-function not only advance the field in the absence of X-ray crystallography, they also build an important body of data to assess later on whether a future structure has indeed captured the protein in its true, active state, said Michael Wolfe of Brigham and Women’s Hospital in Boston, Massachusetts. 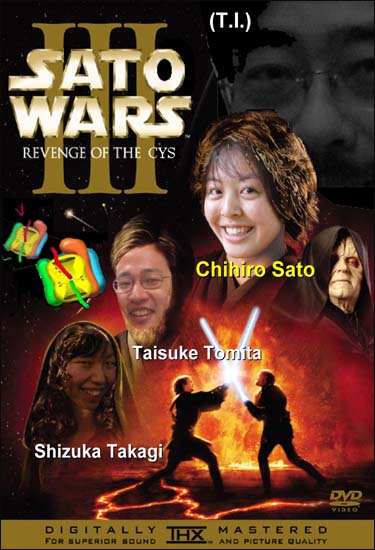 These scientists have joined forces to illuminate the shadowy recesses of γ-secretase with cysteine scanning, cross-linking, and inhibitor studies. Image credit: Ikuo Hayashi

Put simply, the abiding question that animates these studies is this: how can an enzyme hydrolyze, i.e., break a molecular bond using water, right in the middle of a lipid bilayer—a space that is thoroughly water-repellant? To explore this question, Sato and colleagues used cysteine scanning mutagenesis, also called substituted cysteine accessibility method (SCAM). This technique probes the enzyme for the presence of water-accessible residues in the nine different transmembrane domains (TMD) that make up presenilin (the protein-cutting part of γ-secretase). Residue by residue, a cysteine-scanning study evaluates the residue’s respective role in γ-secretase function. In previous work, the Japanese scientists, and also Bart de Strooper’s group in Leuven, Belgium, had proposed the presence of a water-filled catalytic pore lined with hydrophilic sites, and had begun to define its composition made up of particular residues of TMDs 6 and 7 (Sato et al., 2006 with some attendant lightsaber rattling, all in the search for truth; Tolia et al., 2006). This pore is where the cleavage happens. Iwatsubo’s group believes the pore might be shaped like a funnel, with the two catalytic aspartates near its waist.

The identity of the residues that border this pore—creating, in essence, a watery microenvironment inside the otherwise hydrophobic membrane—is the topic of ongoing study. At Keystone, Iwatsubo presented new data extending beyond the published work on TMDs 6 and 7 to TMDs 8 and 9. SCAM analysis of these two domains indicated that TMD 8 is truly buried in the lipid bilayer without contributing any sites to the watery pore. TMD 9 is a different story. It contains many hydrophilic residues, Iwatsubo reported. They cluster around the so-called PAL motif, a three-amino acid stretch on one end of TMD 9 that has previously been implicated in the γ-secretase active site (e.g., Wang et al., 2006). Additional highly water-accessible residues were found further up on TMD 9 and also toward the C-terminus of presenilin. This tail section of the protein is amphipathic, i.e., both hydro- and lipophilic, Iwatsubo reported, and it might serve as the previously proposed “lateral gate” that lets in the γ-secretase substrate from nearby in the membrane, Iwatsubo suggested. (The enzyme does not accept its substrate from the watery milieu on either side of the membrane, like a channel lets in ions. Instead, it somehow grabs its substrate from within the lipid bilayer; how it does so and guides it into its watery core is at question.)

Structural clues about membrane proteins can also be deduced from disulfide cross-linking, a method that allows the scientist to estimate angstrom distances between individual amino acids. Using MTS cross-linkers, Iwatsubo and colleagues constructed a structural model of TMD and presenilin’s C-terminus. It places the PAL motif very close to the catalytic site that had been previously defined by the catalytic aspartates in TMDs 6 and 7 plus a so-called GxGD motif in TMD 7, and it envisions the luminal side of TMD 9 as forming one tilted funnel wall facing the inner pore. (The GxGD motif defines the active site of the I-CliP family of proteases; see more below.) Further structural hints came from an analysis of how the binding of three different types of γ-secretase inhibitor competed with SCAM, Iwatsubo reported. By this method, too, the proposed substrate binding sites comprise the catalytic aspartates in TMDs 6 and 7, the GxGD motif, the PAL motif, and residues on the luminal side of TMD 9.

The details of this study will follow in a paper. In essence, Iwatsubo suggested at Keystone that the group’s data support a mechanism whereby the substrate first binds to a distal piece of TMD 9 that constitutes the lateral gate, then passes through the C-terminal side of the PAL motif, and from there reaches the catalytic site in the middle of the lipid bilayer, which is made up of the luminal side of TMD 6, the GxGD motif, the PAL motif, and separate portions of TMD 9.—Gabrielle Strobel.