Just outside the Miami Conference Center in Florida, green ocean waves lapped at a sandy beach spotted with chunks of brain coral. It was perhaps an appropriate locale for a gathering of 250 scientists who met 16-18 January 2013 at the 7th Human Amyloid Imaging (HAI) meeting to share the most up-to-date research on brain imaging.

At this year's meeting, organized by Keith Johnson of Massachusetts General Hospital, William Jagust of the University of California, Berkeley, and William Klunk and Chet Mathi at the University of Pittsburgh Medical School, Pennsylvania, researchers took a hard look at new data on amyloid-β’s relationship to Alzheimer’s disease (AD). Experts discussed how Aβ plaque relates to other biomarkers, such as tau. Going against perceived wisdom, they asked whether tau tangles precede Aβ deposition? Long-awaited tau tracers are getting off the ground to help answer this question, and as they are being tested in humans, hints are emerging that some tracers may bind a specific form of tau found only in AD patients. Researchers also addressed how data generated from a slew of upcoming Aβ tracers might be compared. In addition, they debuted new guidelines that will advise how amyloid imaging should be used, and for whom. For more on these questions, see subsequent parts of this series. While the conference showed the field has come a long way since amyloid imaging was first introduced in 2002 (see ARF related news story), it also revealed that a lot of work lies ahead.

Tau Imaging Agents on the Horizon
Human data about upcoming tau tracers created the greatest buzz at HAI. Several ligands are in development for use in positron emission tomography, and some have reached the clinical research stage. Hartmuth Kolb of Siemens Inc., in Culver City, California, and Victor Villemagne, University of Melbourne, Australia, both presented human data for candidate tau ligands. All tracers seem to specifically label tau, as previously shown in preclinical studies. This stands in contrast to the first reported tau agent, FDDNP (e.g., see Small et al., 2013). “In-vivo detection of tau is crucial to understanding the mechanism of Alzheimer’s disease,” said Charles Duyckaerts, University of Paris, who was not involved in the development of these compounds.

Last year at the HAI meeting, Kolb presented data for in-vivo mouse and postmortem human tissue binding of 18F-T807 and T808, which were developed by screening with tau-laden human brain slices (see ARF related news story). This year in Miami, Kolb presented the first human data, detailing results of two initial studies evaluating the safety and kinetics of both tracers. Kolb proffered six human scans for each tracer; half the subjects had AD or MCI and the other half were healthy controls.

Both ligands appeared to bind specifically to tau. Healthy participants showed no binding in the brain, while the brains of the dementia patients did. Binding correlated with dementia severity, and the distribution appeared to follow Braak staging. Neither compound bound white matter in either healthy or demented participants, which has been a problem with other tracers. Furthermore, both compounds entered and left the brain quickly. Kolb said both seemed safe for human use. 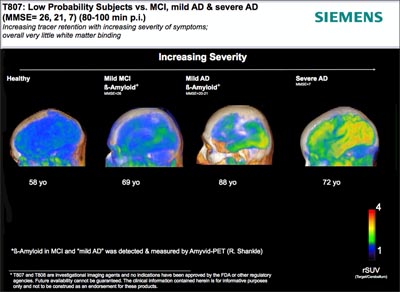 Looking at the data, one scientist asked why the compounds seemed to continue to accumulate in the cortex relative to the cerebellum in AD patients, rather than leveling off or decreasing. Another researcher wondered about T808’s high binding in the striatum, since that region does not contain tau deposits in AD. Kolb said that further studies will hopefully pinpoint the reason for these observations. The jury is still out on whether T807 or T808 is more useful. "Both are still in the game at this point,” said Kolb. The next possible steps with these tracers will be to validate tau binding with postmortem brain tissue and to submit Investigational New Drug applications to the FDA so larger Phase 1 and Phase 2 studies can be conducted. If those trials indicate that the compounds are indeed binding tau, one will be advanced for use in research settings, Kolb said.

Villemagne also presented updated human data on a tau ligand developed by researchers at Tohoku University School of Medicine, Sendai, Japan (see ARF related news story). Last year, he showed data on the first eight humans who underwent PET scans with this ligand, called 18F-THK523, and this year he refreshed that dataset with 15 more people, bringing the total to 23. Ten are healthy controls, 10 patients have AD, and three people are diagnosed with semantic dementia, a form of frontotemporal lobar degeneration without Aβ or tau deposition.

Overall, THK523 selectively bound tau and did not bind to Aβ, as seen by comparing THK523 PET scans to those carried out in the same participants using the Aβ ligand Pittsburgh compound B. Most researchers believe specific tracers for both Aβ and tau are needed. Cortices of people with AD retained 40 percent more THK523 than those without AD, and the binding followed the known distribution of tau deposition in the brain (see Braak and Braak, 1991). Importantly, greater retention correlated with shrinking hippocampal volume and worsening cognition. Overall, the results suggest that the ligand was binding tau deposits. The team plans to corroborate these findings with histopathological studies as postmortem tissue becomes available, Villemagne said.

Interestingly, cognitively normal people with Aβ deposition showed hippocampal THK523 uptake on par with that in AD patients, said Villemagne. AD patients, on the other hand, had additional tracer retention in the cortex. This suggests that a patient becomes demented at the same time as tau aggregates reach cortical areas, Villemagne told Alzforum, though he emphasized that correlation does not prove causation.

Curiously, THK523 does not bind all kinds of tau aggregates. Villemagne and colleagues scanned one person with behavioral FTD, another with progressive nonfluent aphasia, and a third with progressive supranuclear palsy—all tauopathies known to involve different forms of the aggregated protein (see Delacourte, 2005). THK523 did not detect tau in any of these cases in vivo, but tau aggregates did show up with immunohistochemical staining in brain tissue of the PSP patient postmortem. Villemagne explained that tau can assume different shapes in different pathologies, and since ligand binding depends on shape, THK523 may not bind all forms of tau in neurodegenerative disease. Though very preliminary, this finding raises the possibility that THK523 could be a specific marker for tau in AD, said Stephen Salloway, Brown University, Providence, Rhode Island. “Having tau tracers that bind specifically to neurofibrillary tangles would be a major advance for our field,” Salloway told Alzforum. “We’re trying to make distinctions between neurodegenerative diseases more precise—once we define those groups, we can better tailor treatments for each.”

Though it labels AD-related tau, THK523 also binds non-specifically to white matter. For that reason, Villemagne's group has halted development of this ligand and switched to two other F18-labeled compounds with the same molecular scaffold. A poster by project leader Nobuyuki Okamura, Tohoku University, unveiled initial findings. Compared to THK523, the newer compounds THK5105 and THK5117 bound to white matter with lower affinity and to tau aggregates in vitro with higher affinity. In autoradiographic images of postmortem human tissue, distribution of the ligands in the brain mirrored that expected for tau pathology. Both cleared quickly from rodent brains while proving non-toxic.

In-vivo human studies have just begun. Okamura presented results on one AD patient and one healthy control who underwent THK5105 scanning. Results paralleled those for THK523, suggesting the tracer binds to tau aggregates in the brain. It was not retained in healthy control brain. Okamura expects to image 20 people in all and then decide which of the two ligands to develop further. The preferred one could be available for clinical research at several PET centers as early as this summer, he said.

“The developmental process that has gone into these tau ligands makes a convincing case that they are labeling PHF-tau,” Johnson told Alzforum. “However, the final verdict will not be in until postmortem correlation studies are done.” Johnson is currently making plans to work on both the Siemens and Japanese-developed compounds.

“Imaging tau represents the next frontier of AD neuroimaging,” Gil Rabinovici, University of California, San Francisco, told Alzforum in an e-mail. “Just as amyloid imaging has shed light on amyloid’s effects on the human brain, tau imaging would give us a much more complete picture of how the two proteins interact with the brain and with each other, and how they ultimately lead to disease.” Not only would an imaging marker help evaluate tau-targeted drugs in the future, but it might also help diagnose other tau disorders down the line, he said.—Gwyneth Dickey Zakaib