Last but not least, the 8th annual Eibsee conference, held this fall in Southern Bavaria, Germany, featured a poster session in which junior scientists presented new data. Topics ranged widely, from the molecular factors that control expression of the α-secretase enzyme (which scientists want to boost) to the use of D-enantiomeric peptides (which conveniently resist degradation by the stomach’s proteases) as a new therapeutic angle. To highlight but one example, a poster by Ali Taghavi struck into wide open—and coveted—territory. Taghavi, a Ph.D. student in Boris Schmidt’s medicinal chemistry laboratory at the Technical University of Darmstadt, proposed a chemical model that allows him to predict whether a given compound will more likely bind to Aβ or to tau pathology.

The purpose behind this chemistry research is to find a PET imaging agent for tauopathy. The goal of imaging tau pathology has become even more desirable since amyloid imaging in living people has reinvented biomarker research and handed the field a tool to better test the amyloid hypothesis in humans. The amyloid imaging field has flourished since the introduction of Pittsburgh compound B. A crop of competing tracers has sprung up, which are being used in rapidly growing clinical applications including ADNI and some clinical drug trials, and amyloid imaging has its own annual conference (see ARF HAI report; 2009 announcement). The coexistence of Aβ and tau characterizes AD pathologically; hence, PET imaging of Aβ alone is insufficient for a diagnosis of AD. In addition, tau pathology occurs in a range of other dementing diseases for which a live imaging tool could be hugely valuable. But in stark contrast to amyloid imaging, tau imaging is not out of the gates yet. It is not for lack of trying. Many labs are working on the problem, but a sufficiently selective chemical with the right characteristics of binding and brain penetrance has remained elusive to date.

Taghavi in 2006 received a graduate student stipend by the Breuer Foundation that also supports the Eibsee conference. He set out to understand what makes ligands selective for either tau or Aβ. For a benchmark, he started out with IMPYs, thioflavin T-like compounds for whom the relationship between their structure and their activity in binding Aβ fibrils was published (Zhuang et al., 2003; Cai et al., 2007). The published data suggested that the ligand inserts between the tracks of the Aβ fibril in such a way that the aromatic part of the ligand interacts with side chains of the Aβ fibril. Importantly, such a binding mode would not tolerate bulky groups sticking out, but it would tolerate both amphiphilic and non-amphiphilic compounds. (Amphiphilic means that the ligand has one polar, i.e., hydrophilic, and one non-polar, i.e., hydrophobic end, as lipids do, e.g.) In other words, Aβ fibrils would not “care” whether a ligand is amphiphilic or not so long as the ligand was slender and flat enough to align with the narrow channel that forms the binding site on the fibril.

What about tau? Taghavi’s first round of studying the structure-activity relationship between prospective ligands and tau showed right away that amphiphilic ligands bound, whereas non-amphiphilic ones did not. Subsequent fluorescence experiments, too, suggested that an amphiphilic character is necessary for a prospective ligand to bind to paired helical filaments of tau (PHFs are the structural constituents of tangles). In addition, PHFs seemed to prefer ligands of a different shape than did amyloid fibrils. For one, bulky groups on the hydrophilic end were not a hindrance to PHF binding. There was, however, a steric (or spatial) limitation to the hydrophobic end of the ligand. This hinted that, in binding tau PHFs, an amphiphilic ligand inserts into a pocket of a limited size with one end, and sticks out of the PHF with the other. In essence, tau ligands can be imagined almost like the letter T, or like a pin going into a pincushion, where the sharp hydrophobic pin enters the PHF while the hydrophilic button sticks out, facing an open space. Inside the PHF, the pocket for the pin is tight and rigid, holding only straight and rigid ligands, whereas the hydrophilic space can accommodate big polar groups. “To my knowledge, this is the first proposed model for tau-PHF activity of a prospective ligand,” Taghavi said in an interview. 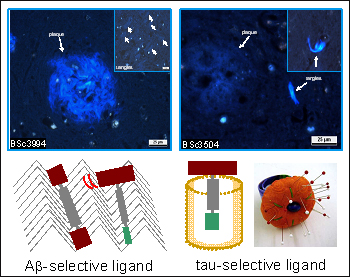 To test his model, Taghavi made a second generation of tau PHF ligands. He varied side chains of IMPY-based ligands to get a sense of just how bulky the polar end can get while retaining strong tau binding. In the process, he synthesized compounds that bind with an IC50 of 2 to 5 micromolar in two different tau assays done in collaboration with Eva-Maria and Eckhard Mandelkow at the Max-Planck Unit for Structural Molecular Biology in Hamburg. Next, Taghavi set aside IMPYs and expanded the chemical synthesis to other compound classes. One such ligand, called BSc3504 (read as “synthesized in Boris Schmidt’s lab”), binds with an IC50 just below the micromolar range. Its bulky polar end precludes binding to Aβ fibrils, and it lights up tangles brightly on tissue sections from AD brain. Further compounds are in the works.

At this point, the technical gap that needs bridging is that Taghavi does not yet have quite the right tau affinity assay. “It is not clear which form of tau you want to show affinity against. It’s not clear what the target should be. I used three tau targets: tau aggregation, PHF depolymerization, and human tissue fluorescence. I believe our best compounds are good PET ligands,” Taghavi said.

Incidentally, the model for selectivity might help explain why some amyloid imaging agents are more selective for Aβ than others. For example, PIB is non-amphiphilic; hence, the model would predict it does not bind tau (it doesn’t), whereas FDDNP has a polar group on one end that makes it amphiphilic and predicts binding of both Aβ and tau (it does; see Braskie et al., 2008). In the last three years alone, a wealth of amyloid imaging agents have sprung up, creating intense scientific and commercial competition (for a recent review, see Klunk and Mathis, 2008). Imaging of tau, or α-synuclein or TDP-43, for that matter, remains entirely up for grabs.—Gabrielle Strobel.