There were so many new data on neurodegenerative disease trials at the recent American Academy of Neurology meeting—held 16-23 March 2013 in San Diego, California—that organizers crammed some of them into an “Emerging Science Platform Session” of three-minute talks, chased with a brief poster session. “It feels like the neurological equivalent of speed-dating,” quipped C. Warren Olanow of Mount Sinai Hospital in New York. 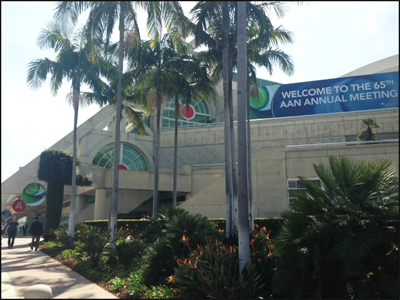 Speakers sprinted through talks on add-on drugs for Parkinson’s and Alzheimer’s treatments, as well as potential meds for amyotrophic lateral sclerosis (ALS). The biomarkers field was represented with a talk about cerebrospinal fluid (CSF) signals to nab subtypes of frontotemporal lobar degeneration (FTLD).

Parkinson’s Relay
Four speakers showed drugs that could work on top of standard Parkinson’s therapy to boost quality of life. Jeffrey Cummings, of the Cleveland Clinic Lou Ruvo Center for Brain Health in Las Vegas, Nevada, led off. He ran a trial on a potential drug for the psychosis that complicates treatment of advanced Parkinson’s and forces patients into institutions. Pimavanserin is a 5HT2A receptor inverse agonist from Acadia Pharmaceuticals, Inc., of San Diego. The drug appeared effective in previous Phase 3 trials, but a strong placebo effect in those studies clouded the results. In the latest study, 199 people received pimavanserin or placebo for six weeks. Cummings said that this time, the drug met the desired endpoint, elevating scores on a PD-focused version of the Scale for the Assessment of Positive Symptoms. This scale is typically used in studies of schizophrenia. People who received the medicine had fewer delusions and hallucinations. They slept better at night and felt more alert during the day. These effects lightened the burden on their caregivers. Importantly, pimavanserin did not interfere with motor function, and was well tolerated. “Something like that is very much needed in Parkinson’s disease,” commented Juha Rouru of Orion Pharma in Turku, Finland.

Taking the baton, Olanow spoke about an add-on to levodopa treatment in hopes of shortening the time people with PD spend “off,” or frozen, when levodopa’s effects wear off. The Phase 2 trial tested tozadenant, an antagonist of the adenosine 2-α receptor, in 420 people who suffered an average of six “off” hours daily. Adenosine receptors modulate the release of neurotransmitters dopamine and glutamate. Two similar antagonists are under development, but tozadenant is less likely than those to increase blood pressure, said coauthor Uwe Meya, of Biotie Therapies Inc., in an interview with Alzforum. Meya works in the company’s Basel, Switzerland, office. The researchers tested four different doses and placebo. Taken twice daily, 120 and 180 milligrams were safe, cut “off” time by an hour, and improved Unified Parkinson’s Disease Rating Scale (UPDRS) scores. The researchers will consider these two doses for future trials.

For the next leg, Robert Hauser of the University of South Florida in Tampa presented a Phase 4 post-marketing trial of rasagiline for people whose symptoms aren’t kept in check with a single dopamine agonist. Over time, dopamine agonists may stop working, requiring higher doses that cause side effects such as sleepiness and poor impulse control. Rasagiline might help because it inhibits the enzyme monoamine oxidase B, blocking the breakdown of dopamine in the brain. Rasagiline is approved for early and late Parkinson’s disease, but few data exist in the literature to support doctors in prescribing it in mid-stage PD. Hauser believes people with PD “miss the boat” if they do not start taking it early on, he told Alzforum. Called ANDANTE, the study was funded by rasagiline's maker, Teva Pharmaceutical Industries Limited of Petach Tikva, Israel. Of 328 trial participants getting unsatisfactory results from dopamine agonist treatment, half received rasagiline, half placebo. Those on drug clocked an improvement in the UPDRS, particularly in motor function, Hauser said.

Stuart Isaacson of the Parkinson’s Disease and Movement Disorders Center in Boca Raton, Florida, took the final lap. He presented trial results for a drug to help the nearly 20 percent of people with PD whose blood pressure drops dangerously when they stand up (Ha et al., 2001). This effect is due to dwindling norepinephrine (Freeman et al., 2008), a hormone that signals the heart and blood vessels to control blood pressure. Chelsea Therapeutics, of Charlotte, North Carolina, makes a drug called droxidopa (aka L-DOPS; see ARF related news story) that is converted to norepinephrine in the body. In the 174-person Phase 3 study, people on droxidopa had higher standing blood pressure and felt less dizzy than those on placebo. This effect was statistically significant after one week of treatment, but not later on. “You may need to adjust the dose,” said Hauser, who was principal investigator on the trial. In the study, the dose was set after a two-week adjustment period. People on droxidopa were less likely to fall than people in the placebo group, and Isaacson was pleased to see that the treatment typically did not raise blood pressure to a dangerous level while patients were lying down.

Chelsea submitted a new drug application to the Food and Drug Administration in 2011, but the agency requested additional data and a demonstration that the treatment worked over a period of a few months. Initially, the FDA questioned whether the current study could satisfy their concerns. However, after an appeal from Chelsea, the agency recently said that the trial data presented might be sufficient for approval, with a possible requirement that Chelsea verify the durability of the benefits after marketing the drug (see the Chelsea press release).

Dementia Dash
On the dementia track, the drug ORM-12741 acts in a new pathway for Alzheimer’s drugs, blocking the α-2C adrenoceptor. Little is known about this receptor; in general, it “fine-tunes brain function,” said Rouru, who presented these results. Affecting many systems, the receptor is thought to modulate brain activity during stress. In rodent studies, ORM-12741 improved memory. In several Phase 1 human studies, the drug was well tolerated. At AAN, Rouru reported results from a Phase 2a study of 100 people with moderate Alzheimer’s. Those who took the drug for three months saw their scores on memory tests pick up by 4 percent, while people on placebo saw them drop by 33 percent in that time. The Orion group is planning another trial but has not set a date, Rouru told Alzforum.

Pivoting to frontotemporal dementia, speaker William Hu of Emory University in Atlanta, Georgia, addressed a conundrum in classifying FTLD subtypes. The disorder comes in two main varieties: lesions full of tau, or lesions made of TDP-43. “Currently, there is no reliable way to distinguish between these two while the patient is still living,” Hu said. “We really need to know what the underlying pathology is.” This would help researchers design clinical trials for drugs that target the appropriate pathology. The research team started with a set of 30 FTLD patients of known subtype at Emory. These were divided into tau and TDP groups based on autopsy, mutations associated with one subtype or the other, or secondary disorders typically linked with a subtype. MAPT mutations or progressive supranuclear palsy indicated the tau subtype, while progranulin or C9ORF72 mutations, or ALS symptoms, pointed to TDP-43. In this Emory cohort, the researchers discovered that the CSF ratio of phosphorylated tau to total tau was lower in the TDP-43 cases. They confirmed this pattern in a further 50 people seen by physicians at both Emory and the University of Pennsylvania in Philadelphia. Using the CSF tau ratio alone, they could identify FTLD-TDP with a sensitivity of 88 percent and a specificity of 73 percent. “We believe this will be very useful in designing future clinical trials,” Hu concluded. Researchers evaluating anti-amyloid drugs in AD have similar concerns about classifying participants properly; the emerging modus operandi is to ascertain amyloid pathology by CSF or PET before including someone in a study.

Not all racers were winners—one drug tripped up. Adam Boxer of the University of California, San Francisco, presented disappointing news on davunetide treatment for progressive supranuclear palsy (PSP). This neurodegenerative tauopathy affects people’s gait and balance, and causes a mild, progressive dementia. The drug, from Allon Therapeutics Incorporated of Vancouver, Canada, is a small peptide that was reported to be neuroprotective or to act on tau protein. Preclinical studies in tau transgenic mice were positive, as was a previous study in mild cognitive impairment, where the drug appeared to help working memory (see ARF related news story). Unfortunately, among the 313 participants in this international Phase 2/3 trial for PSP, davunetide was no better than placebo. At least, Boxer said, the work showed it is possible to perform trials in this rare disease. He reported that the dropout rate was lower than he had expected, and people generally complied with the study requirements. This was the pivotal trial for davunetide; Allon has said it is making no further plans with the drug (see ARF related news story; see also 27 March 2013 Allon update).

ALS Sprint
In the neuromuscular disease arena, Donald Sanders of Duke University in Durham, North Carolina, presented a Phase 2 trial of tirasemtiv, a muscle activator from Cytokinetics Inc. of South San Francisco. This study tested the treatment in 32 people with myasthenia gravis. The autoimmune condition interferes with nerve signals and weakens skeletal muscles, making it a good place in which to test tirasemtiv, said Cytokinetics’ Fady Malik in an interview with Alzforum. “We actually sensitize the muscle to neuromuscular input,” he explained (see ARF related news story on Russell et al., 2012). Single treatments with tirasemtiv improved muscle function in a dose-dependent manner. However, Cytokinetics is more interested in tirasemtiv to treat ALS, Malik said. Myasthenia gravis already has effective therapies, while ALS does not. The ongoing Benefit-ALS Phase 2 trial will examine tirasemtiv’s potential in 400 people with ALS.

Finally, researchers are also pursuing stem cell treatments for ALS. Dimitrios Karussis of the Hadassah Medical Center in Jerusalem, Israel, presented his work with Brainstorm Cell Therapeutics Limited of New York City and Petach Tikva. Brainstorm’s NurOwn therapy consists of bone marrow stem cells taken from each individual person, differentiated into cells that make neuroprotective growth factors, and infused back into muscle or the spinal cord. The researchers are halfway through a Phase 1/2 safety study intended to include 24 people. No worrisome side effects surfaced in six months of follow-up, Karussis reported. He was surprised, since it was a safety study, to also observe some hint of benefit. Participants’ rate of decline on the ALS-functional rating scale slowed after the implants, and muscle function and breathing improved. This mainly happened in people who received intrathecal implants. “I think it is promising,” commented Jinsy Andrews of Cytokinetics. She added that this kind of treatment could potentially help some people with other conditions, not just ALS, because the implants provide a general boost to neurons.