Scientists continue to squeeze every last bit of information out of Phase 3 trials for anti-amyloid antibodies solanezumab and bapineuzumab, even if the last droplets of news are small. Despite setbacks on the primary endpoint (see ARF related news story; ARF news story; ARF news story), researchers are still crunching numbers. They presented the latest analyses at the annual American Academy of Neurology (AAN) meeting, held 16-23 March 2013 in San Diego, California. Eli Lilly and Company's analysis of its two trials concluded that the solanezumab immunotherapy slows decline in cognition in people with mild Alzheimer’s disease, confirming an earlier independent analysis (see ARF related news story). And Reisa Sperling of Brigham and Women’s Hospital in Boston, with researchers from Janssen Alzheimer Immunotherapy of South San Francisco, California, reported a new, complete read of brain imaging data from the Phase 3 bapineuzumab trial. Looking for evidence of blood vessel damage they might have missed before, the researchers found several additional cases of amyloid-related imaging abnormalities (ARIAs). Those patients had not been taken off treatment. Overall, the ARIAs did not seem to herald worse outcomes, and are not necessarily a reason to stop anti-amyloid treatment, Sperling said.

Solanezumab Effects Confirmed
Lilly contracted the Alzheimer’s Disease Cooperative Study to analyze data from the EXPEDITION and EXPEDITION2 solanezumab clinical trials, which included 2,052 participants. The ADCS presented its results at meetings held in the fall of 2012. At AAN, Ann Hake of the company’s Indianapolis, Indiana, location offered the first public presentation of Lilly’s in-house analysis, which had been reported in a press release around the same time (see ARF related news story). The company’s strategy, designed prior to the trial, yielded results comparable to ADCS’, Hake said. “Apart from very slight differences … the results are remarkably similar.”

Based on pooled analysis of the trial data, the ADCS concluded last October that the drug slightly slowed decline in cognition and in performing daily activities in people with mild, but not moderate, AD (see ARF related news story). Lilly calculated that solanezumab treatment of people with mild AD slowed the rate of cognitive decline by 34 percent over the 80-week trial. Before the study, Hake noted, clinicians with whom Lilly consulted said a 35 percent impact on decline would be meaningful. “It is a modest effect,” Sperling commented to Alzforum, adding, “but if you do that five years before dementia, it could be extremely meaningful because you might be able to prevent dementia.” Lilly plans to initiate another Phase 3 trial, focusing only on people with mild AD (see ARF related news story).

Hake also presented a poster showing the effect of solanezumab on biomarkers. The ADCS previously reported that the treatment elevated total amyloid-β concentrations in plasma and cerebrospinal fluid (CSF), indicating the drug bound amyloid and removed it from the brain (see ARF related news story). Lilly's analysis agreed. The body takes a month to clear solanezumab-bound Aβ from circulation, Hake said, accounting for the many thousand-fold increase in total plasma amyloid in treated participants compared to those who received placebo. In the CSF, Lilly saw that solanezumab-bound Aβ went up while free amyloid went down, as expected. “The biomarker data showed evidence of target engagement,” Hake concluded.

Bapineuzumab’s Side Effects Extended
At the meeting, researchers reporting on Janssen and Pfizer's trial of bapineuzumab, focused on ARIAs. This worrisome side effect has surfaced in many immunotherapy trials. Poster presenter Nzeera Ketter from Janssen noted that when the intravenous bapineuzumab trial started in 2007, the researchers were not aware of the extent to which ARIAs would appear. Though ARIAs had occurred before in patients treated with AN1792, that trial was small, she said, and it used an active anti-Aβ vaccine (see ARF related news story on Hock et al., 2003). In addition, MRI scans were read by local radiologists at each trial site, and partway through the bapineuzumab study Janssen realized that those neuroradiologists had not identified every case of ARIA.

For the re-read reported in San Diego, neuroradiologists specifically trained to find ARIAs examined each of the 15,713 scans from the study of 2,400 people, looking for dense signals, or white spots on images, that indicate accumulation of extracellular fluid (see image below). They found 76 previously unidentified cases of ARIA, bringing the total for the study to 243. The missed cases were generally mild, Ketter said. Some people with ARIA had no symptoms associated with more severe ARIA, such as headache or confusion. 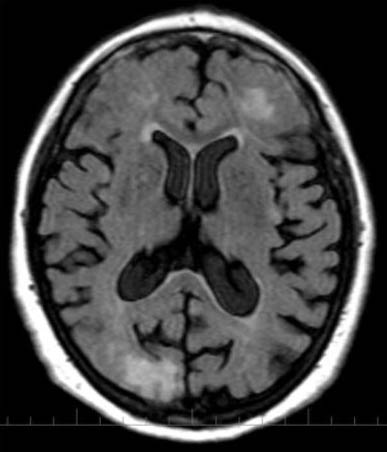 ARIA and Bapineuzumab
In some patients, treatment resulted in anomalous white areas on MRI images (bottom left and top right), indicating accumulation of fluid. However, as reported at the meeting, this side effect was not necessarily symptomatic. Image courtesy of Reisa Sperling, Brigham and Women’s Hospital, Boston

The researchers may have gained some serendipitous information from these 76 patients. Typically, when doctors noticed ARIAs in the trial, they put treatment on hold until they resolved, said Steven Salloway of Brown University in Providence, Rhode Island, who participated in the bapineuzumab program. But in these 76, treatment continued. Most ARIA signals went away by the next imaging session, about three months later and following another bapineuzumab infusion, but some returned, Sperling said. However, ARIAs affected neither cognitive nor functional tests, Sperling said in her talk. “ARIA is not as scary as we initially thought,” she told Alzforum, “but nevertheless, it does limit the dose we can administer, and we need to find a way to decrease the incidence if possible.”

Charles DeCarli of the University of California, Davis, asked if bapineuzumab may have worked in some patients but ARIA reversed its benefits. “Is that a group that might have done better, had they not had that effect?” he asked. Researchers agreed that it is difficult to know. While that is possible, Salloway noted that the data showed no treatment benefits that were reversed following the appearance of an ARIA.

More data are bound to come from both medications. A trial with subcutaneous bapineuzumab injections is still underway and, in addition to Lilly’s next Phase 3 trial of solanezumab planned for people with mild AD, the Dominantly Inherited Alzheimer Network is testing the antibody as a preventive treatment for mutation carriers (see ARF related news story), while the ADCS will test it in the Anti-amyloid Treatment in Asymptomatic Alzheimer’s Disease (A4) prevention trial (see ARF related news story).—Amber Dance.