A fruit fly is joining the menagerie of TDP-43 animal models, bringing the power of Drosophila genetics to the lab bench. Researchers from the Northwestern University School of Medicine in Chicago, Illinois, present the model in a paper posted online by PNAS this week. The flies express wild-type human TDP-43, a protein linked to both amyotrophic lateral sclerosis and frontotemporal dementia. When the human protein is expressed in motor neurons, the animals show axonal swelling, reduced axonal branching, and ultimately motor neuron loss and mobility problems.

The current work was led by first author Yan Li and principal investigator Jane Wu. They generated flies expressing TDP-43, hitched to red fluorescent protein (RFP), under neuron-specific promoters. When they expressed the transgene in motor neurons, the flies failed to hatch from the final pupa stage, so they studied the larvae. These moved less than their control counterparts expressing only RFP. Additionally, the researchers created viable adults by turning on the transgene only in adult tissues, allowing the larvae to develop normally. The adult flies also spent less time in motion than did control flies.

TDP-43 localization appears to be key to its pathogenesis, with the normally nuclear protein migrating into the cytoplasm in disease conditions (see ARF related news story on Barmada et al., 2010; Jane Wu is a coauthor on this recent paper). Under the microscope, the researchers saw that most of the TDP-43 transgene remained nuclear, but when it moved into the cytoplasm the cells displayed swelling, nuclear fragmentation, and cell death. 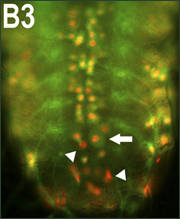 TDP-43 contains two amino-terminal RNA-binding domains and a carboxyl-terminal glycine-rich region. Both have been linked to toxicity (see ARF related news story on Zhang et al., 2009 and ARF related news story on Seyfried et al., 2010). When Li and colleagues expressed solely the carboxyl-terminal fragment in their flies, they found no neurotoxicity, supporting evidence that the amino terminus contributes to pathogenesis.

Many TDP-43 mutations have been linked to disease; however, TDP-43 proteinopathies also exist in people without mutations. In these flies, surplus wild-type TDP-43 was sufficient to cause problems. If that is so in human disease, then reducing TDP-43 might alleviate the symptoms. The researchers created double mutants carrying the human TDP-43 transgene but lacking Drosophila TDP. These animals moved around more than the animals with excess TDP, suggesting that simply increasing TDP levels is enough to cause pathology.

The authors suggest their model will be useful to identify genes that interact with TDP-43 and to test drugs that might dampen the protein’s toxic effects.—Amber Dance