Neurons may not have a monopoly on storing information in the brain. Astrocytes take up and release glutamate and other neurotransmitters, and some in vitro evidence suggests that these glial cells modulate synaptic transmission. With nine times as many astrocytes in the brain as neurons, it may be time to take a closer look at the in vivo roles of these “helper” cells. That’s just what MIT researchers led by Mriganka Sur have done. In tomorrow’s Science, they report that astrocytes in the ferret cortex respond to visual stimuli with even more spatial precision than neurons themselves. “This argues that astrocytes have a very special relationship to neurons—that they get input at the same synapses that neurons do,” said Sur in an interview with ARF. Furthermore, the researchers may have solved a long-standing mystery—why blood flow, which is the basis for functional MRI and other imaging modalities, should be related to neuronal activity. “We show that when astrocytes are activated, there is blood flow to a very local region of the brain. This immediately explains why brain imaging tools such as fMRI work in the first place,” said Sur.

It is well known that neurons in the visual cortex are tuned to specific coordinates in the visual field. “The reason we see shapes is because there are cells in the cortex that are sensitive to little oriented line segments, and these orientation-selective neurons set the stage for shape and form perception,” said Sur. The question was whether astrocytes in the visual cortex might be similarly tuned. Because astrocytes do not generate action potentials, the researchers had to come up with some way of monitoring their responses to visual stimulation other than electrophysiological recordings.

Joint lead authors James Schummers and Hongbo Yu used two-photon microscopy to measure calcium responses to visual stimuli. The first thing they found was that astrocytes in the ferret visual cortex responded with robust calcium increases to a line grating that drifted across the visual field (see figure below). Next, the researchers asked if those responses depended on the orientation of the stimulus, as they do in neurons. They found that not only do astrocytes respond to specific stimulus orientations, but that the preferred orientation is almost identical to that of nearby neurons, suggesting that there is spatial alignment between neurons and adjacent astrocytes. In fact, astrocytes seem tuned at a much finer resolution than neurons. On average, neurons will respond at about half-strength to a stimulus that is 20 degrees off the preferred orientation, whereas astrocytes barely respond at all. Mapping responses at single-cell resolution, the authors found that the orientation preference of astrocytes was just as precise and overlapped with that of adjacent neurons. “The idea of astrocytes as individual cells with unique response patterns stands in sharp contrast to the long-standing view that astrocytes form a continuous syncytium in the brain,” write Fred Wolf and Frank Kirchhoff, Max Planck Institute, Gottingen, Germany, in an accompanying Science perspective. 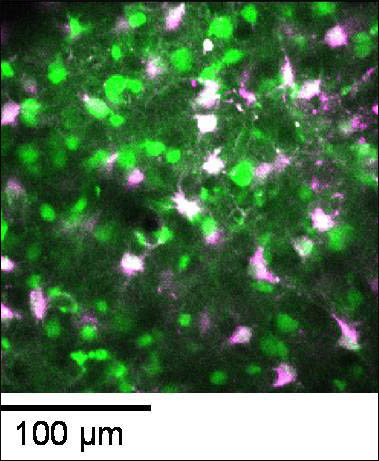 As for the role of astrocytes in hemodynamics, Schummers and colleagues used optical imaging, under the same conditions as the two-photon measurements, to measure blood flow. They used the glutamate transporter antagonist DL-threo-β-benzyloxyaspartate (TBOA) to selectively silence astrocyte responses to visual stimuli while leaving neuronal responses intact. In the presence of TBOA, local blood flow responses were eliminated. “After decades of hemodynamic brain imaging, we are finally able to visualize the cellular mediator of vascular responses in action,” write Wolf and Kirchhoff.

This work most likely has far-reaching consequences beyond the visual cortex. Sur strongly believes that astrocytes are behaving in the same way in other areas of the brain, including the hippocampus (see, e.g., Diamond et al., 1998) and that this may be why fMRI and other hemodynamic imaging analysis works. “One direct implication of our work is that the specificity of brain imaging is made possible because of the specificity of astrocyte function,” he said.—Tom Fagan