Rather than tackle a criminal in your bedroom, why not prevent him from entering your home? That’s the therapeutic takeaway from a new study on intracellular trafficking of amyloid-β precursor protein (APP) and the protease that slashes it to jumpstart production of the amyloid-β peptide. Reporting online this week in the Proceedings of the National Academy of Sciences USA, researchers led by Wim Annaert of KU Leuven, Belgium, show that APP and β-secretase (BACE1) take different paths to meet in early endosomes, the primary site of Aβ generation. Whereas APP reaches these degradative compartments by clathrin-dependent mechanisms, BACE1 moves along a clathrin-independent pathway regulated by the small GTPase ADP ribosylation factor 6 (ARF6), according to the research. Though the molecular details of ARF6-mediated pathways remain murky, “What is clear from the experiments here is that the internalization of BACE1 occurs very distinctly from APP. The evidence is very convincing,” said Dudley Strickland of the University of Maryland, Baltimore. The results suggest that, rather than directly block BACE1, researchers may be able to target enzymes that smuggle it into the cell, thereby snuffing out Aβ production while leaving APP unharmed.

Whereas many labs measure Aβ production as a readout for APP processing, Annaert’s focuses on where the processing occurs—and more specifically for this study, how APP and BACE1 get from the cell surface into endosomal compartments where they meet. To get a handle on this, first author Ragna Sannerud and colleagues enhanced or blocked specific endocytic routes in HeLa cells expressing fluorescently labeled APP and BACE1 proteins, then tracked their internalization using confocal microscopy. When the researchers treated cells with epidermal growth factor (EGF) to stimulate clathrin-independent endocytosis, they saw that BACE1 got internalized faster than usual, whereas trafficking of APP and another protein, transferrin receptor, did not change. On the other hand, in cells where clathrin-dependent endocytosis was blocked using multiple strategies, uptake of APP and transferrin receptor came to a halt while BACE1 internalization proceeded normally. These data indicated that APP and BACE1 follow different routes from the cell’s surface to the endosomal compartments, where the proteins meet to do their dirty work.

In another set of experiments, Annaert’s team found a large proportion of BACE1, but not APP, co-localizing in endosomes with other membrane-bound proteins (CD59 and MHC1) that become internalized via a non-clathrin-mediated pathway. This pathway is driven by ARF6, and the researchers demonstrated that this GTPase can regulate BACE1 trafficking as well. By transfecting cells with an ARF6 mutant locked in its GTP-bound state (ARF6-Q67L)—which pushes internalized cargo into “phantom” vesicles that effectively exit the endocytic pathway (see figure)—the researchers prevented BACE1, but not APP, from reaching early endosomes.

Importantly for AD, the authors went on to show that using ARF6 mutants to manipulate BACE1 trafficking produced the expected effects on Aβ production. The ARF6-Q67L mutant slowed it. However, a GDP-locked ARF6 mutant (ARF6-T27N) that blocks recycling of proteins from endosomes to the cell surface led to the opposite outcome—more β amyloid—by forcing BACE1 and APP to hang around longer in the same compartments (see image). 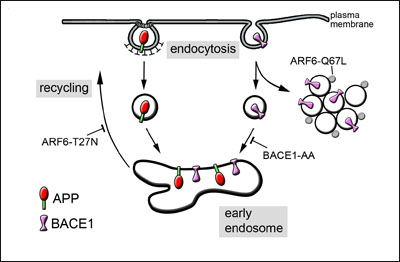 Finally, the authors extrapolated their findings to primary neurons with confocal and biochemical data suggesting that APP processing occurs less in the axon and much more in the somatodendritic compartment, where Aβ typically accumulates.

All told, the findings “open up the interesting idea that production of Aβ peptides is temporally and spatially regulated,” said Strickland, whose recent paper implicates a new low-density lipoprotein receptor in APP trafficking (ARF related news story on Ranganathan et al., 2011). That BACE1 and APP seem to follow distinct routes to the endosome “reveals a complexity to their cellular itinerary and raises new potential targets for pharmacological intervention,” noted Julie Donaldson of the National Heart, Lung, and Blood Institute, National Institutes of Health, Bethesda, Maryland (see full comment below). Blocking BACE1 endocytosis is probably not the way to go, Annaert suggested. Rather, “We can target the enzymes that activate or deactivate ARF6 in a way that delays trafficking of BACE1 and produces less Aβ. The aim is not to block but modulate—to keep it under control,” he said.

Giuseppina Tesco of Tufts University School of Medicine, Boston, took note of a finer point in the study—that BACE1 sorting to early endosomes required a C-terminal dileucine motif (DISLLK) known to be important for BACE1 trafficking. This domain binds Golgi-localized γ ear-containing ARF-binding (GGA) proteins, which are a focus of the Tesco lab. Her group showed that GGA3 levels are decreased in AD brain and inversely correlated with BACE1 levels (ARF related news story on Tesco et al., 2007). The current paper raises the question “of whether ARF6 regulates BACE1 endocytosis and levels via GGA3 or another adaptor,” Tesco noted in an e-mail to ARF. “It would be interesting to determine whether ARF6 levels are also changed in AD brains.” (See full comment below.) Studies of this nature are ongoing in Annaert’s lab, and preliminary data “confirm our conclusion that such endosomal pathways can be selectively affected in aging,” Annaert told ARF.—Esther Landhuis