Researchers have long assumed that people with familial Alzheimer’s disease make too much Aβ42 in the brain, but they lacked proof. Now, in the June 12 Science Translational Medicine, researchers led by Randall Bateman at Washington University in St. Louis, Missouri, provide the first direct evidence. By measuring the flux of labeled Aβ in the cerebrospinal fluid (CSF), the researchers found that middle-aged people with a presenilin mutation produce about 20 percent more Aβ42 in the brain than do people with normal copies of the gene. The study turned up some surprises as well. Soluble Aβ42 vanishes from the CSF more quickly in mutation carriers than non-carriers, which could indicate that it is depositing onto plaques. However, in carriers much of the soluble Aβ42 disappears only temporarily and reappears hours later, leading to an overall slower rate of clearance from CSF than in non-carriers. This delay resembles the kinetics seen in late-onset disease, where Aβ lingers in the CSF (see ARF related news story). “In addition to the unique mechanisms that cause early onset disease, mechanisms similar to those in sporadic AD, including impaired processing and clearance, may be at work in mutation carriers,” Bateman said.

Other researchers called the work an important advance. “It’s the first confirmation in vivo of what was expected based on a lot of in-vitro and animal work,” said Bill Klunk, University of Pittsburgh, Pennsylvania. “This confirmation is important because plans for therapies in people with autosomal-dominant disease are based on assumptions from those preclinical studies.”

Bateman and WashU colleague David Holtzman developed the method of stable isotope labeling kinetics (SILK) in 2006 (see ARF related news story). In this process, researchers intravenously inject a pulse of 13C-labeled leucine into volunteers, then collect CSF over the next 36 hours. They immunoprecipitate Aβ from the samples and analyze labeled isoforms by mass spectrometry to measure how quickly labeled Aβ was produced and cleared. In 2010, the authors used the technique to show that in 12 volunteers with mild late-onset AD, Aβ42 cleared about 30 percent more slowly than in healthy, age-matched controls (see ARF related news story).

In the current study, the authors turned their attention to familial AD. Co-first authors Rachel Potter and Bruce Patterson performed a SILK study on 11 volunteers with a PS1 or PS2 mutation, and 12 sibling controls. The participants’ average age was in the mid-forties. Most participants were asymptomatic. Two mutation carriers had been diagnosed with prodromal AD and one with mild AD. Seven of the 11 carriers showed evidence of brain amyloid deposition by positron emission tomography with Pittsburgh Compound B (PIB-PET). To interpret the study results, Bateman, along with Patterson, who studies metabolic kinetics, and biomedical engineer Donald Elbert, developed a mathematical model that assumed different pools of Aβ in the CSF, for example, peptide that is freely soluble, forming aggregates, or bound to larger structures. The analysis revealed three distinct processes affecting Aβ: production, reversible exchange with unlabeled peptide pools, and irreversible loss from the CSF. That loss could be into the periphery, degradation in the brain by proteases, or stable incorporation into brain structures, such as amyloid plaques.

The data confirmed that people with PS mutations produce about 20 percent more Aβ42 and have an Aβ42/Aβ40 ratio about 25 percent higher than non-carriers. The authors did not see any difference in production of Aβ40 or Aβ38, contradicting predictions from some animal studies that these isoforms would drop in the presence of PS mutations (see, e.g., Bentahir et al., 2006). Intriguingly, other studies have shown that people who carry an APP mutation that protects against AD make about 20 percent less Aβ42 and Aβ40 over their lifetime than do controls, an effect of similar magnitude but in the opposite direction (see ARF related news story).

Curiously, in mutation carriers, about 50 percent of newly synthesized Aβ42 temporarily disappeared from the soluble pool, only to reappear hours later. This process reflects reversible exchange of labeled peptide with a preexisting pool of unlabeled Aβ, according to the authors. It is not clear what the unlabeled pool is, but the authors speculate it comprises higher-order structures, such as oligomers or larger aggregates, or even plaques. In non-carriers, reversible exchange was negligible, representing less than 10 percent of the total pool.

If Aβ42 interacts with plaques, does it ever get stuck in these structures? Perhaps so, as the authors’ model shows that some newly made Aβ permanently exits the soluble pool. This irreversible loss, or fractional turnover rate (FTR), of Aβ42 relative to Aβ40 was higher in mutation carriers, even those who tested negative for brain amyloid by PIB imaging, than in non-carriers. Where does the peptide go? Since this effect was more pronounced in carriers who tested positive for amyloid on PIB imaging, plaques possibly sequester Aβ42, suggest the authors, although this remains to be proven. In addition, the peptide could be degraded or cleared into the bloodstream. In ongoing work, the authors are measuring plasma levels of labeled peptide to see if it appears there (see image below). 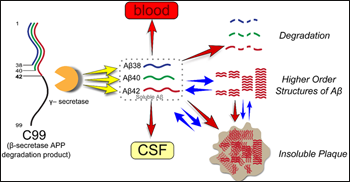 The fact that irreversible loss of Aβ42 from CSF occurs more quickly in middle-aged mutation carriers even before plaques can be detected by PIB-PET implies that some Aβ aggregation is already underway in these people, the authors speculate. If so, the SILK method could provide an early, pre-imaging biomarker for altered Aβ kinetics. The data in this study showed nearly complete separation between mutation carriers and non-carriers, Bateman noted. In 2007, Bateman and Holtzman co-founded the St. Louis-based company C2N Diagnostics to commercialize the technique and are using it in preclinical and clinical studies (see ARF related news story; ARF news story; and ARF news story). They have applied for a patent on the diagnostic use of the compartmental model, according to a WashU press release.

One surprise was that the more abundant peptide Aβ40 turned over more slowly in people with brain amyloid compared to those who were plaque free. The presence of plaques may alter normal physiology and impede clearance mechanisms, the authors speculate. For example, plaques could clog drainage through interstitial spaces, or amyloid deposits in blood vessels might slow passage into the bloodstream. Moreover, Bateman pointed out that because of the large quantity of Aβ42 that undergoes reversible exchange in carriers, the overall rate of Aβ42 clearance is slower than in controls. “In mutation carriers the primary defect appears to be one of overproduction, which subsequently leads to exchange and plaque formation that slows down normal clearance mechanisms. It appears to be a one-two hit. That’s a very important addition to our understanding of the pathophysiology that leads to disease in these individuals,” Bateman said.

In ongoing work, Bateman is analyzing Aβ kinetics in 100 people with sporadic AD, using the modeling techniques and technical advances developed for this study. He hopes to learn whether impaired clearance describes all sporadic AD or if there are some people with late-onset AD who overproduce Aβ42. Bateman and colleagues also plan to study the effects of anti-amyloid therapies. Compartmental modeling will help researchers predict what effect an antibody that targets oligomers or plaques should have on reversible and irreversible Aβ loss, Bateman said. Klunk noted, “The data provide a baseline against which to compare similar studies in medication-treated patients. It would be very interesting to see how a BACE inhibitor would affect this [familial AD] population, or how immunotherapies would work against this backdrop.”––Madolyn Bowman Rogers