Neuronal cholesterol plays bad guy in Alzheimer’s disease, pumping up Aβ production, but its precise modus operandi remains hazy. In today’s Science, researchers led by Charles Sanders at Vanderbilt University School of Medicine, Nashville, Tennessee, present evidence that cholesterol directly binds to the C99 fragment of amyloid precursor protein (APP). This fragment, the result of β-secretase cleavage, is important for AD pathology because it is cleaved by γ-secretase to release Aβ. Using high-resolution biophysical imaging techniques, Sanders and colleagues delineated the detailed 3D structure of C99. They report that cholesterol nestles into a pocket formed by the transmembrane and extracellular portions of the molecule. This coziness with cholesterol may help direct C99 into cholesterol-rich membrane domains known as lipid rafts, the authors suggest. If so, it would explain how cholesterol pushes APP into the amyloidogenic pathway, since the rafts are reportedly laden with γ-secretase. “Finding that cholesterol binds to the amyloid precursor protein is a little bit like finding the missing piece of the jigsaw puzzle,” Sanders told Alzforum.

“This is an important finding,” said Richard Epand at McMaster University, Hamilton, Ontario, Canada. “It provides a specific, molecular-level understanding of how cholesterol interacts with C99.” This knowledge may aid in the rational design of drugs that could interfere with amyloid production, he added. Epand was not involved in the work.

To solve the 3D structure of C99, joint first authors Paul Barrett and Yuanli Song used nuclear magnetic resonance (NMR) and electron paramagnetic resonance spectroscopy to examine in-vitro, monomeric C99 in a lipid environment. The fragment is a membrane protein with a single helical transmembrane domain (TMD). One surprise, Sanders said, was finding that the TMD is curved and flexible. The active site of γ-secretase accommodates a curved molecule (see Osenkowski et al., 2009; Renzi et al., 2011), suggesting that C99 is well suited to fit into the secretase’s scissors. Sanders speculated that the flexibility of the TMD may allow it to slide when it is in the active site, perhaps explaining why γ-secretase cuts imprecisely, producing Aβ fragments of variable length. In addition, spectroscopy revealed that the extracellular, N-terminal domain of C99 contains a small “N-helix” that embeds itself lengthwise in the membrane and moves around freely. The N-helix is tethered to the TMD via a short, pliable “N-loop.”

The authors then examined C99’s interaction with cholesterol in vitro. They solubilized C99 in small detergent-stabilized membrane fragments called bicelles, which preserve the lipid bilayer of cell membranes. When the researchers added cholesterol to the solution, they saw a dose-dependent shift in C99’s spectral peaks that indicated the two molecules were binding at a 1:1 ratio. Notably, the dissociation constant falls within the physiological concentration range for membrane cholesterol, implying that this interaction can also happen in vivo. To reveal the binding site, the authors mutated each residue in the N-helix, N-loop, and extracellular TMD, finding several changes that eliminated cholesterol binding and suggested a mechanism. The data imply that cholesterol binds C99 in a novel fashion, the authors note. The steroid snuggles up to the flat surface of twin GXXXG motifs (known as a “glycine zipper”) in the TMD, where it sticks via hydrophobic van der Waals forces. Then, C99’s flexible N-loop flips the N-helix over cholesterol like a hat, and a couple of hydrogen bonds form to stabilize the interaction (see image below). 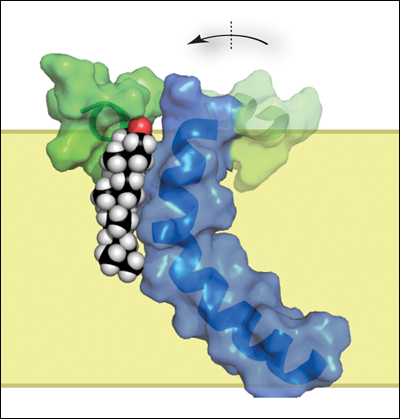 The interaction with the GXXXG motifs was another big surprise, Sanders said, as these sequences are known as dimerization sites (see, e.g., Kienlen-Campard et al., 2008; ARF related news story). However, in this newly solved structural model of C99, the N-helix appears to partially block the approach of other C99 molecules to the glycine zipper, which would discourage pairing up. The data imply that these GXXXG sites may drive cholesterol binding more than they do dimerization, Sanders said. Mutations in this motif that reduce Aβ production are proposed to reduce dimerization (Munter et al., 2007). Cholesterol probably binds full-length APP in a similar fashion as it does C99, the authors suggest, as the additional extracellular portion of APP is unlikely to interfere with this binding mechanism. If so, cholesterol may help sequester the precursor protein into lipid rafts, which would expose it to cleavage by β- and γ-secretase and promote Aβ production (see ARF related news story and ARF news story). By contrast, α-secretase primarily circulates outside of rafts. The data imply that interfering with cholesterol binding could reduce transport to rafts and amyloidogenic processing. “We think this is potentially therapeutically relevant,” Sanders said. In collaboration with Anne Kenworthy at Vanderbilt, Sanders will test the theory, as well as explore what parts of cholesterol bind to C99; this information could aid in the design of drugs that interfere with the interaction.

Cholesterol may influence C99 processing through other mechanisms as well, the authors note. For example, the steroid could block α-secretase’s access to its cleavage site, which sits on the extracellular side of the N-helix, or it could encourage Aβ fragments to aggregate. Cholesterol may also act as a co-factor to enhance γ-secretase action (see Osenkowski et al., 2008). Currently, many pharmaceutical companies are developing therapeutic γ-secretase modulators (GSMs), which lower the ratio of amyloidogenic Aβ fragments to non-amyloidogenic species (see ARF related news story; ARF news story). “We think [cholesterol] is very relevant to GSMs,” Sanders said, pointing out that the cholesterol-binding site in C99 overlaps with the γ-secretase binding site. These mechanisms of action are not mutually exclusive, and, in fact, may all be relevant, Sanders noted.