The lymphatic network extends throughout the body, filtering cellular waste out of circulating fluids everywhere—except in the brain. Curiously, this energy hog, which falters at the slightest change to its physiology, has no lymph vessels. Instead, scientists have believed for years that the cerebrospinal fluid (CSF) acts as the brain’s lymphatic system. Research published in the August 15 Science Translational Medicine adds substance to this old concept. Using in-vivo imaging to track solutes injected into the brains of mice, “we showed that the CSF goes into the brain just like people thought, but it does so along very specific anatomical structures,” said Jeffrey Iliff, first author on the study led by senior investigator Maiken Nedergaard of the University of Rochester Medical Center in New York. “There’s a specialized anatomy that allows the CSF to move very quickly and very deeply into the brain, exchanging with fluid that’s inside.” The pathway depends on a specific water channel found on astrocytes and seems important for clearing brain amyloid-β in mice, the scientists report. The glymphatic pathway, as the authors named it, since it relies on glia, clears Aβ, suggesting it may help prevent amyloid plaques from accumulating in the brain.

Earlier work in anesthetized cats showed CSF tracers flowing through the brain alongside arteries (Rennels et al., 1990; Rennels et al., 1985), suggesting that the CSF acts in lymph-like fashion. Yet other studies called that idea into question; the CSF appeared to snake through the brain slowly, with unpredictable direction (see Ichimura et al., 1991). In the current study, the Rochester team revisited this issue with state-of-the-art imaging technology.

First, Iliff and colleagues did an experiment the old-fashioned way—injecting fluorescent tracers into the CSF of anesthetized mice, then killing the animals at various time points and fixing their brain tissue to see where the tracers had gone. Fluorescence microscopy of the brain slices confirmed that the tracers were moving along the outsides of blood vessels. When the experiments were repeated in transgenic mice with fluorescently labeled arteries, the results were “pretty unequivocal that [tracer movement] followed arteries only,” Iliff told Alzforum.

To get a clearer picture of where solutes go in real time, the scientists then switched to two-photon imaging, which also enabled them to visualize the brain at greater depths than conventional microscopy. Two-photon microscopy can penetrate down to 400 to 500 microns—not so deep for the human brain but good enough to see most of the way through the cerebral cortex in mice.

Iliff and colleagues injected fluorescent green tracers, ranging in size from 3 to 2,000 kD, into the CSF of anesthetized mice, and watched their movement through cranial windows embedded into the skull. The tracers moved down into the cerebral cortex along arteries, then collected in deep veins where they got drained out of the brain (see video below). “As the fluid courses in along arteries through the tissue and out along veins in a continuous flow, it sweeps along particles that are sitting in between the cells,” Iliff said.

Capturing one frame per minute, two-photon microscopy shows a fluorescent green tracer moving into the brain along an artery (shown in red on left side) and picking up particles (black dots) en route to a vein (shown in blue on right side) for eventual clearance out of the brain. Images were taken at the brain’s surface (top panel), and at 60 and 120 microns below the surface (middle and bottom panels, respectively). [Courtesy of Jeffrey Iliff, University of Rochester Medical Center.]

Those experiments defined the clearance pathway anatomically. But what pushes solutes and fluids through the system? Iliff and colleagues had a hunch that astrocytes played a role. Portions of these glial cells wrap around brain arteries, and those appendages carry a water channel called aquaporin 4 (Aqp4). To test whether the astrocytic water channels were responsible for driving fluid around the arteries and through the brain, the researchers injected mannitol and dextran molecules into the CSF of Aqp4 knockout mice. By two-photon microscopy and slice imaging, the solutes moved through the brain more slowly and got cleared 65 to 80 percent less efficiently than in wild-type mice. (See a brief explanation by Iliff in this three-minute video.) 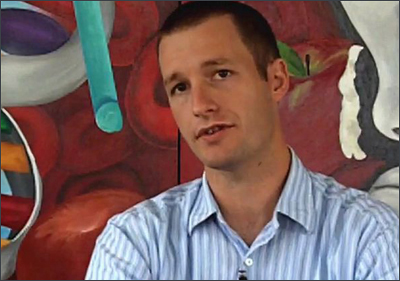 The findings could have ramifications for neurodegenerative diseases that cause abnormal buildup of proteins in the brain. To test if the glymph system clears the brain of Aβ, the team injected fluorescent-tagged Aβ1-40 into the mouse striatum and saw it collecting and aggregating “in those same deep veins that we saw with other tracers,” Iliff said. Aqp4-null mice cleared 125I-labeled Aβ from the brain about 70 percent more slowly than did wild-type animals.

“We think this is how things are cleared if nothing else can clear them, like a pathway of last resort,” Iliff told Alzforum. This glymphatic pathway influenced the movement of 759-dalton and 3-kD tracers, but did not affect larger molecules around 2,000 kD. Size is not all that matters. The glymph cleared Aβ (~5 kD) faster than a similar-sized dextran molecule, suggesting that other factors besides size influence clearance rate. Iliff said the most likely candidates for clearance along this path would be hydrophilic molecules that lack specific transporters and cannot leave the brain by rapid diffusion.

Other molecules may be cleared by other mechanisms. “The relative contributions of the glymphatic system, arachnoid villi transport, and active blood-brain barrier transport should be determined, though will likely need to be done for individual molecules,” noted John Cirrito of Washington University School of Medicine in St. Louis, Missouri (see full comment below).

Clearing Aβ is a major therapeutic strategy, and many groups are testing immunotherapy approaches, which are based on large immunoglobulins. It is hard to predict how the glymph system might affect clearance by these therapies. “Antibodies that activate microglia and cause phagocytosis of plaque would not need bulk flow clearance. However, antibodies that target soluble Aβ, like Lilly’s solanezumab, may use this pathway more,” Cirrito told Alzforum via e-mail. “That said, the glymphatic system discriminates by size, and an antibody bound to Aβ would be 40-fold larger than Aβ alone, so its clearance through the pathway may be hindered.”

Other scientists found the study interesting because it sheds light on a new cellular player in the brain’s perivascular clearance pathways. “It’s not only vascular smooth muscle cells in small penetrating cerebral arteries that regulate these systems, but astrocytes, too,” said Berislav Zlokovic of the University of Southern California, Los Angeles.

To examine the role of astrocytes in clearing brain Aβ, Iliff and colleagues are crossing AD transgenic lines with mice deficient in Aqp4. They also plan to mechanically disrupt the CSF clearance pathway in 3xTg AD and APPswe/PSEN1dE9 mice to see if that speeds amyloid deposition, or enhances CSF flux and see if that slows plaque buildup.—Esther Landhuis