Location, location, location. Among those who suggest this real estate mantra deserves higher priority in Alzheimer disease drug design are scientists in Germany who have created a membrane-tethered version of a β-secretase inhibitor. In today’s issue of Science, the researchers report that this modified inhibitor reaches endosomes, the subcellular compartments containing active β-secretase, and greatly outperforms free inhibitor at blocking the enzyme’s activity in cultured cells and in fruit fly and mouse models. While these findings represent a “proof of principle” for the membrane-anchoring approach, the new strategy faces tough hurdles en route to practical drug therapy.

BACE1, the transmembrane protein that confers β-secretase activity, has become a prime AD drug target in large part because it plays a key role in generating Aβ peptide, whose accumulation in plaques represents a hallmark feature of AD. Partnering with a complex of proteins known as γ-secretase, BACE1 catalyzes the rate-limiting step in the sequential cleavage of Aβ from amyloid precursor protein (APP) (Small and Gandy, 2006). Like other membrane proteins, BACE1 transits constantly from the plasma membrane into endosomes and back. But from the AD perspective, the dirty work of BACE1—providing the initiating cut of APP for Aβ release—occurs not at the cell membrane but within early endosomes (see Rajendran et al., 2006; ARF related news story). This discovery—reported by Kai Simons and colleagues at the Max Planck Institute for Molecular Cell Biology and Genetics, Dresden—led the authors to consider that targeting BACE1 inhibitors to endosomes might boost their efficiency at reducing harmful β-secretase activity.

Noting the acidic interior of endosomes (pH 5) and contrasting it with the cell exterior, whose pH is closer to 7, first author Lawrence Rajendran reasoned that BACE1 does not adopt its active conformation at the plasma membrane. “If transition-state inhibitors recognize, bind to, and inactivate only the active conformation of the enzyme,” Rajendran told ARF in an interview, “what is the point of designing inhibitors that cannot go to the subcellular compartment where the enzyme is active?”

To coax a β-secretase inhibitor into endosomes, Rajendran and colleagues started with a non-permeable, transition-state, peptide BACE1 inhibitor and used a polylinker to hook it to a cholesterol molecule. The attached sterol moiety, they reasoned, would anchor the inhibitor to the plasma membrane, from which it could hitch a ride on the endocytic trafficking system to reach its target—active β-secretase. Targeting the endocytic pathway would also seem wise in light of recent work showing that 70 percent of Aβ production in the brain requires endocytosis (see ARF related news story).

The membrane-anchoring strategy worked beautifully. In electrochemiluminescence and immunoblotting experiments, the researchers found that treating cultured cells with the sterol-linked inhibitor reduced levels of β-secretase cleavage product in the culture medium by about 80 percent, whereas free inhibitor had no effect.

To determine whether the sterol-linked inhibitor was in fact reaching endosomes, the scientists made fluorescent derivatives of both the sterol-linked and the free inhibitor and visualized treated cells under the microscope. These experiments showed not only that the membrane-tethered inhibitor was getting endocytosed, but also that concentrations as low as 0.1 micromolar could block the appearance of the β-cleaved APP ectodomain in the cells. Disrupting endocytosis with a mutant dynamin greatly reduced internalization of the inhibitor, they found. 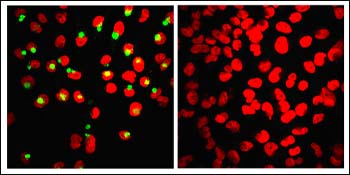 Given that specialized, cholesterol-rich membrane domains called lipid rafts are enriched in β-secretase and function as sites of APP cleavage (Cordy et al., 2006), Rajendran and colleagues asked whether the potency of their sterol-linked inhibitor was related to how effectively it was targeted to lipid rafts. To this end, they created inhibitors with different anchors carrying various membrane and raft affinities. This experiment showed that the more “raftophilic” the anchor, the more it was able to augment the compound’s inhibitory potential.

To show in vivo effectiveness, the researchers tested their sterol-linked inhibitor first in a fruit fly model system, then in mice. The flies are triple transgenic (expressing human APP, β-secretase, and presenilin), develop neurodegeneration with age, and tend to die prematurely. This phenotype is preventable with secretase inhibitors (Greeve et al., 2004). Treating the larvae with the membrane-anchored inhibitor increased their survival rates about three- to sixfold relative to solvent-fed controls. When injected into the hippocampus of APPsw/PSDE9 mice, a transgenic model with early and robust AD pathology (Radde et al., 2006), the sterol-linked compound inhibited hippocampal Aβ levels at least twofold better than did the free inhibitor, which fared just as poorly as the solvent control.

With these findings, the authors rationalize that a membrane-anchored version of the inhibitor would be superior to a soluble but membrane-permeable inhibitor. Tethering the inhibitor to the membrane not only got it into endosomes to reach its target, they argue, but it also increased the inhibitor’s local membrane concentration, boosting reaction rates between inhibitor and target. Rajendran and colleagues are collaborating with chemists from Technical University Dresden to apply their membrane-tethering strategy to an HIV fusion inhibitor.

“This is definitely a very innovative and clever approach to drug therapy for Alzheimer disease,” said Corinne Augelli-Szafran, a medicinal chemist with 20 years of drug discovery experience. However, “the greater challenge will be to design these types of inhibitor into having drug-like characteristics,” she told ARF via e-mail (see Q&A below). Augelli-Szafran directs the Laboratory of Experimental Alzheimer Drugs at Brigham and Women’s Hospital, Boston, and was not involved in the new BACE work.

Her sentiment was shared by Jordan Tang, scientific co-founder of CoMentis, Inc., a San Francisco-based company whose β-secretase inhibitor appeared promising in recent human trials of the small-molecule drug (see ARF related Keystone story). Though membrane tethering is an “interesting concept for targeting β-secretase inhibitors to endosomes,” Jordan said via e-mail, a key concern is that the conjugation would make inhibitors considerably larger. “Since the blood-brain barrier has a cut-off size of about 500 Da,” he wrote, “people designing drugs are strained to put selectivity, blood-brain barrier penetration and potency all in a small package.” (See full comment below.)

As a first step toward addressing the blood-brain barrier issue, Rajendran told ARF that experiments are underway to determine whether membrane-anchored inhibitors injected into mouse brains intraventrically can produce effects comparable to direct injections into the hippocampus.—Esther Landhuis

Esther Landhuis is a freelance writer in Dublin, California.

Q: Does targeting BACE inhibitors to endosomes make sense from a drug development perspective?
A: This is definitely a very innovative and clever approach to Alzheimer disease therapy. The data clearly support the presented hypothesis. However, this approach is in its infancy in determining whether it can actually reach a point of practical drug therapy. The first impression and available data are such that this strategy may mostly be used mechanistically and as a pharmacological tool for this disease.

Q: What are some of this strategy’s advantages and disadvantages?
A: The advantage is that a novel approach to inhibiting BACE has been confirmed, and this in itself generates excitement in the area of Alzheimer research. These new data clearly support that membrane-anchored inhibitors can be transported to the endosomes, where β cleavage occurs, and the results presented add significant understanding to this therapeutic area.

The disadvantage is that the inhibitors presented are of chemical matter that is non-drug-like in character. Extensive research would need to be done to advance these peptide inhibitors to entities that resembled drug development candidates, before even considering the stage of human clinical trials. The timeframe to reach this point of return seems to be far into the future. Brain penetration, bioavailability, clearance, metabolism, toxicity are among the issues that would need to be addressed.

Q: What have been some of the technical challenges in BACE inhibitor design? Does this paper address any of them?
A: They have been to modify the inhibitors to a point of druggability, meaning to have the necessary pharmacokinetic and brain-penetrant profiles such that significant efficacy is observed in vivo both in animals and humans. Most BACE inhibitors to date have been peptide-like in character and, hence, contribute to the inability to optimize the compounds sufficiently to first-in-human trials. The work presented here shows a completely different type of inhibitor that apparently is able to illustrate greater inhibition because of its membrane-anchoring character that allows the inhibitor to be transported to the endosomes where the β cleavage occurs. But the greater challenge will be to design these types of inhibitors into having drug-like characteristics. This issue was not discussed in this paper, nor was how this strategy could be practically applied to designing drugs. However, it was stated that the general approach could be applied to other membrane protein targets.

Overall, this paper clearly demonstrates classical innovation and convincing, elegant results that advance Alzheimer research, perhaps both mechanistically and as pharmacological tools. However, using these inhibitors as a potential drug discovery approach towards the identification of a novel therapy does not seem practical at this time.