A new neuron in the adult hippocampus is a bit of a gatecrasher. It must act like it is supposed to be there, sending out feelers, making contact, and tactfully joining ongoing communications. Failure may mean ejection. But as Fred Gage and colleagues describe in the May 7 Nature Neuroscience online, new neurons seem skilled at joining existing neuronal conversations. The research adds to a growing body of evidence that new neurons integrate functionally into the adult brain.

The realization that adult neurogenesis occurs in humans has raised hopes that new neurons can be coaxed to replace those lost to neurodegenerative disease, such as Alzheimer’s. But are new neurons functional? Many labs have tried to answer that question. In 2002, Gage and colleagues, from the Salk Institute, La Jolla, California, showed that new neurons were electrically active (see ARF related news story), while this year, Paul Frankland and colleagues at the Hospital for Sick Children and the University of Toronto reported that new neurons integrate into functional memory circuits in the hippocampus (see ARF related news story). There are also numerous reports linking neurogenesis to learning and memory (see, e.g., ARF related news story). But this latest work seems to suggest something more, because it hints that new neurons not only seek out and join existing neuronal connections, but that they may also have the potential to replace older, established neurons.

The researchers arrived at that hypothesis by looking at the morphology of maturing neurons in the adult mouse hippocampus. First author Nicolas Toni and colleagues used a Moloney murine leukemia virus to transfect dividing cells and their progeny, with green fluorescent protein (GFP). They were then able to follow those labeled cells over time, using sophisticated ultrastructural techniques such as confocal microscopy, electron tomography, and serial section electron microscopy to view what kind of connections new neurons made with old.

Their findings suggest the latter. The researchers reconstructed the 3D volume around filopodia, processes thought to be precursors of dendritic spines. They found that on new neurons, approximately 85 percent of filopodia are found within 50 nm of an existing synaptic bouton, and 100 percent were found within 200 nm. Furthermore, nearly all the boutons that associated with filopodia from new neurons were also involved in synaptic connections with old neurons. The results suggest that it is the new neuron that seeks out and tries to make connections with established networks.

But the new neurons don’t stop there. By looking at the morphology of the new neurons over time (up to 6 months), the researchers found that the motility and basic makeup of neuronal protrusions change. While they are very active in the first three weeks or so after a new neuron is born, they become more stable during subsequent months. The protrusions change from long, thin filopodia, which are unlikely to take part in synaptic transmission because they lack the necessary receptors, to shorter, wider spines. The researchers found that when new neurons reached the age of 30 days, about 75 percent of their dendritic protrusions had bulbous tips, a characteristic of spines that take part in synaptic activity. Also by then, the majority of these bulbous spines made contact with axonal boutons that were already in contact with an older synapse. That new neurons contact these multiple-synapse boutons (MSBs) indicates that they integrate into existing networks. But over the next 150 days, the proportion of spines making contact with MSBs fell and spines making contact with single synapse boutons (SSBs) became the majority (see image below). 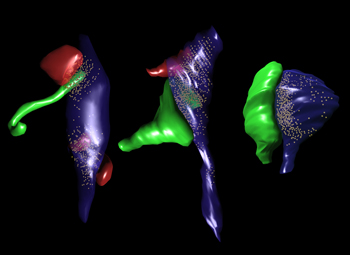 “This progression leads us to hypothesize that there is a replacement mechanism at work,” said Toni. This fits in with what is known about the survival of new neurons in the brain, he suggested. “New neurons depend on synaptic connections, and one way they survive is by competing with older neurons,” he said. What might happen to the older neuron that lost some of its connections is unclear. “Since this is still a working hypothesis, we haven’t been able to address that question, but we are tackling it now using in-vitro experiments,” said Toni.

That such replacement might happen under normal circumstances suggests that it might also prove a viable strategy to replace lost or damaged neurons in disease states. Perhaps the most crucial question is whether such replacements can be extensive enough to be physiologically relevant. “That is a very critical question,” agreed Toni. He suggested the general consensus is that the number of new neurons formed in the brain over the lifetime of an animal can be important and, given the correct circumstances, perhaps the whole complement of dentate gyrus cells may be replaced over time. He also noted that it is easier to induce long-term potentiation, which is required for learning and memory, in new neurons than in old ones. “If new cells are replacing old, they may be refreshing the capacity of the hippocampus,” he suggested.—Tom Fagan