Many studies using Pittsburgh Compound-B (PIB) to probe amyloid deposits in the brains of MCI and AD patients have also found a fair percentage of normal elderly walking around with heads full of amyloid. While some wonder how these folks’ plaque-laden minds remain sound, others propose that the plaques may be a very early warning sign of AD—the window through which researchers can now see the “sleeping giant” long before people show symptoms of dementia. In any case, it will be important to determine if these PIB-positive healthy people have thrown a wrench into the field’s longstanding amyloid hypothesis, which claims that amyloid buildup is the primary driver of AD pathology. As discussed at the Human Amyloid Imaging meeting, held 11 April 2008 in Chicago, finding ways to reliably distinguish true controls from amyloid-positive controls has therefore become a key challenge for ongoing and future studies.

Bill Klunk of the University of Pittsburgh, Pennsylvania, who co-developed PIB with colleague Chester Mathis, opened the first session with a talk describing several objective methods for detecting amyloid positivity at the earliest stages of amyloid pathology. In one approach, mild outliers are removed from a set of PIB retention values (measured as DVRs, or distribution volume ratios) for a given brain region displayed in a standard box-and-whisker plot. Repeating the outlier removal process leaves behind the amyloid-negative group. The second method selects amyloid-negative subjects by identifying breakpoints in the distribution of a parameter calculated from the magnitude and variability of PIB uptake. From a pool of 60 non-demented controls, both methods pulled out an almost identical set of 16 amyloid-positive individuals. These objective approaches seemed to detect amyloid positivity as well or even better than did visual reads of the PIB-PET images by trained readers, but Klunk cautioned that zones of uncertainty will remain. “Amyloid deposition and PIB retention are continuous variables,” he said. “No cutoff will be perfect.” That said, the data he presented suggest it is possible to devise objective, generalizable methods for finding amyloid-positive individuals within groups of otherwise normal subjects.

In fact, it may even be reasonable to define a cutoff using one approach and apply it to an independent sample, according to new work presented by Elizabeth Mormino, a graduate student in William Jagust’s lab at the University of California, Berkeley, and winner of the first annual HAI Young Investigator Award. Using MRI and PIB-PET data from 20 healthy seniors (mean age 72.3) and 20 with AD (mean age 64.3), the researchers determined average PIB counts from the prefrontal cortex, cingulate, and parietal and lateral temporal areas. PIB cutoff values were selected based on receiver-operator characteristic (ROC) curves applied to three region-of-interest (ROI) methods: 1) ROI approach: mean PIB value from a single ROI; 2) cortical index approach: average of three ROI means extracted in method 1; 3) highest ROI approach: highest mean from ROIs used in method 1.

Optimal cutoffs determined from these curves were applied to an independent sample from the database of the Alzheimer’s Disease Neuroimaging Initiative (ADNI), a national effort to coordinate the reams of data from MRI, PET, and other biological and clinical measures to better detect AD and monitor its progression. The researchers then looked to see whether the AD-like ADNI control participants showed signs of AD in other ways—namely, age, hippocampus volume, and episodic memory. The answer was yes, at least according to the first two measures: the high-PIB group was older and had greater hippocampus atrophy. Longitudinal follow-up will determine whether any of the high-PIB folks convert to AD.

For the HAI audience, perhaps the biggest surprise from Mormino’s talk was the finding that more than 41 percent (7 of 17) of the ADNI normal controls were classified as PIB-positive, compared with just 2 of 20 Berkeley controls. In response to concern about this observation raised in the post-session Q&A, Mormino noted that the ADNI group was five to six years older and significantly less educated than the Berkeley cohort.

In the next session, Chet Mathis of the University of Pittsburgh, Pennsylvania, presented more evidence for greater-than-expected amyloid positivity among control subjects. He summarized PIB-PET data from 78 baseline studies at 12 ADNI sites collected as of February 2008. (PIB-PET scans were added to the ADNI study in 2007.) In this preliminary analysis of 17 controls (mean age 79), 46 people with MCI (mean age 74), and 15 with AD (mean age 73), the general trends were not surprising: the control group had lower PIB retention than did the MCI group, which had lower PIB uptake than did the AD group. However, the average PIB value across the control group was somewhat high, and when the iterative mild outlier approach (described in Klunk’s talk) was applied to the data, 11 of 17 controls met the cutoff for PIB positivity (as did 40/46 MCI and 14/15 AD subjects). In the control group, the precuneus was the brain area that contributed most to the high PIB values. 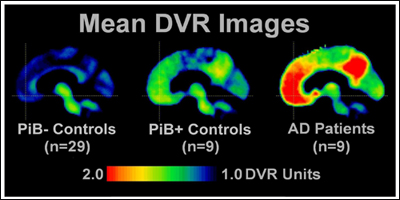 Distinguishing true controls from PIB-positive controls can be tricky, as shown in the mean PIB images from this study of 43 normal controls. Though PIB-positive controls tend to have lower levels of PIB retention than do AD patients, their regional distribution of high PIB uptake can be quite similar. Image credit: University of Pittsburgh Amyloid Imaging Group

In side-by-side comparisons with Pittsburgh PIB-PET data, both ADNI control and MCI subjects had higher PIB uptake than did their Pittsburgh counterparts, consistent with the trend in the Berkeley-ADNI comparisons reported by Mormino. But there were also differences—one of which Mathis mentioned in post-meeting e-mail correspondence with ARF. Illustrating how conclusions can vary based on cutoff definitions, Mathis noted that different methods used by the Pittsburgh and Berkeley teams to define amyloid positivity may explain why the groups identified different proportions of the ADNI controls as PIB-positive (11/17 and 7/17, respectively). The Berkeley researchers used an average of four cortical regions and the ROC method to define controls above a cutoff value. The Pittsburgh group set a lower bar for PIB positivity: subjects whose PIB uptake in just one of seven cortical areas that was significantly greater than a regional cutoff were defined as PIB-positive.

During Q&A, several people wondered whether the ADNI controls might be skewed by people who volunteer for the study out of concern for their (or their spouse’s) cognitive health. Chris Rowe, director of the Centre for PET at Austin Health in Melbourne, mentioned that the PIB positivity rate in Australia’s version of ADNI (the Australian Imaging, Biomarkers and Lifestyle study of aging (AIBL) is near 30 percent.

Though it was not the major focus of the research, a high percentage of PIB-positive normal controls was also reported on a poster by Stephen Gomperts of Keith Johnson’s group at Massachusetts General Hospital, Boston. In this study looking at whether amyloid detection using PIB could distinguish dementia with Lewy bodies (DLB) from Parkinson disease dementia (PDD), Gomperts and colleagues found that 51 percent (19 of 37) of the normal controls used in the PDD analysis had brain amyloid levels in the PIB-positive range.

Along similar lines, consider this interesting tidbit shared between HAI talk sessions by Agneta Nordberg of the Karolinska Institute, Stockholm, Sweden: an 83-year-old healthy man, who was PIB-positive when the first European human PIB trials began in 2002 at her Stockholm clinic, is still doing well today—more than six years later.

On the flip side, a poster by Gil Rabinovici and colleagues (including Mormino and Jagust) at UC Berkeley and UCSF presented data suggesting that PIB might not be sensitive enough to pick up the very earliest amyloid changes. In their study of a 58-year-old with familial frontotemporal lobar degeneration with motor-neuron disease (FTLD-MND), the researchers found control-range PIB uptake on PET, yet saw a moderate degree of immature diffuse plaques at the patient’s autopsy 11 months later.

Pondering these various cases, scientists may wonder, on one hand, just how long normal people can remain under the PIB radar (if half of controls can appear PIB-positive with no cognitive decline) and yet, at the same time, whether PIB requires some threshold of amyloid buildup before it picks up anything at all. Determining the clinical relevance of PIB-based amyloid readouts will likely require coordinated analysis of data from PIB-PET data other brain imaging techniques as well as biological and neuropsychological tests.—Esther Landhuis.