29 December 2012. More than 900 researchers and clinicians gathered in Chicago, Illinois, at the 23rd annual International Symposium on ALS/MND, held 5-7 December 2012. Genetics was, as ever, a hot topic. As outlined in this multipart series, enthusiasm ran high over the discovery of C9ORF72 expansions as a cause of disease, and the potential of turning this knowledge into treatments. Recent clinical trial data also topped the agenda. Alas, most drugs failed efficacy, and researchers are now hoping that newer therapies in development may fare better. A new database of past trial results, announced at the meeting, may help speed progress toward therapy (see ARF related news story). Basic protein and cell biology were not neglected either. Neil Cashman of the University of British Columbia in Vancouver related a tale of how amyotrophic lateral sclerosis pathology might travel from one neuron to the next via templated protein misfolding.

The spread of protein pathology from molecule to molecule is popping up across the spectrum of neurodegenerative diseases. Both tau and β-amyloid, for example, misfold and act as templates to induce further conformational chaos (reviewed in Walker et al., 2012). Cashman argued that the ALS gene SOD1 produces a protein that can template misfolding even in its wild-type form. He described how SOD1 can transmit pathological misfolding from cell to cell, via liquid media. And early data indicate that the protein uses two modes of travel: as a free protein aggregate or as a passenger on exosomes.

Cashman believes SOD1 behaves like a prion. He told Alzforum that to prove a protein fits the prion definition, it must pass two tests. First, the infectious nature of the particle should be passed from molecule to molecule. He and Les Grad—formerly of Cashman’s lab and now working at PrioNet Canada, a research network based in Vancouver—showed intermolecular transfer of SOD1 misfolding in 2011 (see ARF related news story on Grad et al., 2011). Second, the misfolded protein must pass from cell to cell and region to region. ALS pathology does seem to start in one anatomical location and spread throughout the nervous system (Ravits and La Spada, 2009), and in Chicago, Cashman reported that SOD1 indeed transfers from cell to cell.

A bona fide prion must be transmissible between individuals, Cashman said. He emphasized that no one is suggesting that ALS or other non-prion neurodegenerative conditions are contagious. In fact, many researchers prefer the term “templated protein misfolding” to distinguish the propagation of amyloidogenic proteins from that of truly infectious prions that cause Creutzfeldt-Jakob disease, bovine spongiform encephalitis, and scrapie (Hardy and Revesz, 2012).

Grad and colleagues addressed the cell-to-cell requirement with a media transfer experiment. They transfected HEK293FT human embryonic kidney cells with mutant SOD1, then transferred the conditioned media to cultures that expressed only the native, wild-type SOD1. That wild-type protein promptly converted to the misfolded, aggregated form. The researchers used misfold-specific antibodies to detect the conversion. The team was able to serially transmit the misfolded conformation from culture to culture, via the media, indefinitely, Cashman said.

One possible explanation for the transmission could be that the mutant SOD1 itself hopped from culture to culture, leaving wild-type protein untouched. That seems unlikely since the mutant protein would be diluted over time, but the researchers wanted to definitively prove that the wild-type protein transmitted the pathological shape. By silencing SOD1 expression in recipient cells with RNA interference, they showed that wild-type SOD1 was required as raw material for more misfolding.

The team still had to prove that malformed SOD1 itself, and not some other factor in the conditioned media, was responsible for misfolding in the recipient cells. They did so by incubating the media with antibodies to SOD1 to pull out the protein, which abolished the transmission of misfolding. “The transmissible particle must contain misfolded SOD1,” Cashman told Alzforum. “There is really no other explanation than a prion-like mechanism.”

Researchers have focused on ALS genes and mutations for a long time, but Cashman’s presentation suggested it is now time to pay close attention to protein-based disease mechanisms, even those concerning wild-type proteins, commented Hande Ozdinler of the Northwestern University Feinberg School of Medicine in Chicago, who was not involved in the study.

SOD1 Carriers
How might the snarled SOD1 travel from one cell to the next? The team investigated this question in the mouse motor neuron NSC-34 cell line. Other work suggests that recipient cells can swallow mSOD1 aggregates via macropinocytosis, in which the cell engulfs some of the liquid around it (Münch et al., 2011). The Cashman group examined how donor cells might release those aggregates, hypothesizing that the misfolded SOD1 inclusions escape dying cells. Collaborator Justin Yerbury of the University of Wollongong, Australia, observed via light microscopy that transiently transfected neurons, carrying either wild-type or mutant SOD1, released micron-sized aggregates as they expired.

While aggregates released by a dying cell could certainly infect neighbors, Cashman suspects that is not the main mechanism for the misfolding propagation, because ALS pathology seems to spread faster than neurons die. He looked for a mechanism that would explain transmission from living donor cells. Because prions have been shown to propagate via exosomes (Février et al., 2005), Cashman collaborated with exosome expert Bradley Turner of the University of Melbourne, Australia, to see if SOD1 spreads the same way. On electron micrographs, Turner observed that misfolded SOD1 co-localized with exosome markers on small extracellular vesicles.

Cashman suspects misfolded SOD1 factors in more than familial ALS cases caused by SOD1 mutations. That is because the wild-type protein, too, can infect neighboring cells if it adopts the snarled conformation. In fact, Cashman and other researchers have observed misfolded, wild-type SOD1 aggregates in sporadic ALS (see ARF related news story on Bosco et al., 2010). What would cause normal SOD1 to fold in the absence of SOD1 mutations? In Chicago, Cashman presented evidence that the pathological mislocalization of ALS-linked proteins TDP-43 and FUS tips normal SOD1 toward the misfolded conformation (see photo below). SOD1 aggregates showed up in spinal cord tissue from people who died of ALS caused by mutant FUS or the C9ORF72 expansion, or from sporadic ALS linked to TDP-43 inclusions. Transfecting human neuroblastoma SH-SY5Y cultures with mutant FUS, or mutant or wild-type TDP-43, has also produced SOD1 misfolding (Pokrishevsky et al., 2012). The work suggests that TDP-43, FUS, SOD1, and other mutations do not fall into distinct boxes, but are all “players in the same game,” Ozdinler said. The Cashman group has not worked out the pathway between FUS/TDP-43 and SOD1 misfolding, but it is likely indirect, because aggregated SOD1 did not co-localize with either. 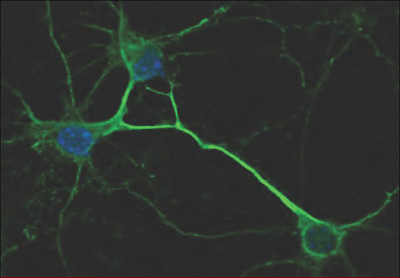 “I think that SOD1 is the cause of most, if not all, types of ALS,” Cashman proposed. “The propagated misfolding of SOD1 is the fundamental mechanism.” If his model is correct, then blocking intercellular transfer could halt the spread of neurodegeneration. Biogen Idec of Cambridge, Massachusetts, plans therapeutic development of misfolded SOD1 antibodies generated in the labs of Cashman and Jean-Pierre Julien of Laval University in Québec City, Canada.—Amber Dance.