Anyone gazing into a crystal ball about the future health status of Americans should be quite worried about the rapid rise of obesity, diabetes, and related metabolic disorders. Not only do these conditions impose a large direct burden on the nation's health care, but they also greatly increase the risk of dementia, according to a growing body of evidence.

Hyperinsulinemia and insulin resistance increase the risk of Alzheimer disease as well as of vascular dementia. Numerous studies point to a variety of possible mechanisms, including the role of insulin signaling on amyloid-β regulation, synaptic integrity, inflammation tau phosphorylation, brain vascular function, and energy metabolism.

These findings suggest that early identification and treatment of insulin resistance may delay or prevent Alzheimer disease and vascular dementia. Potential interventions include physical exercise, caloric restriction, manipulation of the diet, pharmacologic insulin sensitization, and intranasal delivery of insulin to the brain.

In this Webinar, Suzanne Craft reviewed the evidence on the role of insulin resistance in brain aging and dementia, and presented results from animal and clinical studies of interventions. Joining her for a panel discussion were Greg Cole, Suzanne de la Monte, Bill Klein, Matt Townsend, Jose Luchsinger, and Caroline Sanz. 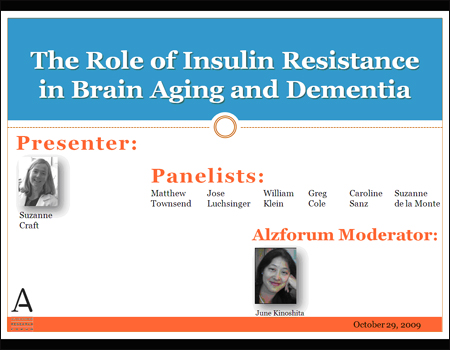 Question From Greg Cole
Given that diabetes/insulin resistance appears to be a larger risk factor for dementia in ApoE3 carriers, wouldn't you expect that the patients in your ACT cohort study with Dr. Larson who had both dementia and diabetes/insulin resistance were more likely to be ApoE3 than ApoE4 than the control AD group. That would help explain reduced amyloid pathology. Did you look at ApoE genotype differences?

Reply by Suzanne Craft
That is a logical prediction. Unfortunately, we did not have ApoE genotypes available for our cases to examine this possibility.