Whether it’s a Bach concerto, Fermat's last theorem, or simply remembering the way home from the grocery store, cognition comes at a price. The brain depends on an elaborate network of blood vessels to feed its voracious appetite for oxygen and glucose. What if that system breaks down? Numerous studies support the idea that cardio- and cerebrovascular disease increase the risk of cognitive decline. The molecular, cellular, and physiological mechanisms have long been murky, but that is finally changing.

On Wednesday, January 8, 2014, Costantino Iadecola and Maiken Nedergaard presented some of their latest findings and explained why the field is shifting. Iadecola has uncovered molecular interplays between Aβ and cell-surface receptors in the neurovascular niche, and Nedergaard has defined a lymph-like drainage system in the brain that clears metabolites, such as Aβ, from the interstitial fluid.

We thank Neuron for giving Alzforum readers free access to this paper.

The Glymphatic System – A New Player in Alzheimer Disease? from Alzforum
Neurovascular Regulation in Health and Disease from Alzforum

Communication between neurons in the human brain and the blood vessels that supply them is a busy two-way street. Arterioles and capillaries that feed the central nervous system respond to neuronal demands for nutrients and oxygen, while brain cells provide trophic support that keeps the blood vessels alive. Hurt one and the other suffers. How does this delicate balance fit with Alzheimer’s disease pathology? Historically, researchers have separated AD from vascular dementia. AD diagnostic criteria that the community followed for more than 20 years excluded anyone with vascular disease from the diagnosis (McKhann et al., 1984), while vascular dementia was considered primarily a disease of the blood vessels. Is it time to give up this dichotomy?

Epidemiological evidence linking Alzheimer’s and vascular disease continues to grow. Both share common risk factors, including hypertension, diabetes, hyperlipidemia (see Sahethevan 2012 for a review), and metabolic syndrome (see Yaffe 2007). Pathology seen at autopsy supports these associations. Microscopic tissue damage caused by small blood-vessel lesions exacerbates dementia in patients who have only mild AD pathology, for example (Schneider et al., 2012).  The data suggest that rather than being opposite ends of a spectrum, there may be considerable overlap between AD and vascular dementia. However, the lack of good experimental models has made that difficult to prove. Constantino Iadecola and Maiken Nedergaard have begun to make inroads with novel experimental approaches. 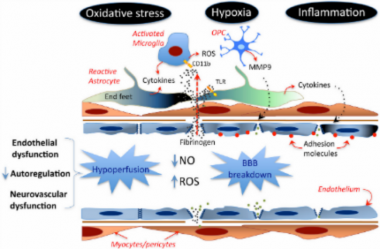 Iadecola uses mouse models to follow the natural history of disease, correlating vascular changes with Aβ pathology. Through a cranial window in the skull, he saw that as the mice aged, cerebral blood flow tapered off long before plaques appeared, suggesting that Aß compromises the vasculature early in disease. That renders these animals more susceptible to stroke, which is also true of people who have Alzheimer’s (Tolppanen et al., 2013; Chi et al., 2013). Iadecola has traced this damage to CD36, one of a family of cell surface scavenger receptors that evolved as part of the innate immune system to clear unwanted proteins. CD36, present in endothelial cells, perivascular macrophages, and also in platelets and leukocytes, happens to bind Aβ, triggering production of reactive oxygen species (see Mar 2011 news). This works by CD36 activating NADPH oxidase to generate superoxide radicals. Knocking out that enzyme restores normal blood flow in young Tg2576 mice and they sharpen up in tests of learning and memory (Park et al., 2008). Knocking out CD36 also rescues the vascular damage without slowing the growth of amyloid plaques. The work indicates that Aβ directly damages the vasculature independently of plaque burden, supporting the idea that cross talk between neurons and the vasculature plays a significant role in AD.

Nedergaard has identified a lymph-like system in the brain that drains it of small solutes and peptides, including Aβ. This glymphatic pathway is driven by water channels expressed on astrocytic processes that surround blood vessels. It penetrates deeply into the brain, where it moves fluid and solutes along the perivascular space around small vessels into the CSF (see Aug 2012 news story). Contrast-enhanced MRI reveals the system at work in rodents (see Mar 2013 news story).

Researchers are excited by the possibility of one day influencing this process to clear excess Aβ and other waste products more rapidly from the brain. Recent work suggests that rather than being just a stochastic process, the brain regulates glymph drainage. Lo and behold, sleeping mice sweep Aß through this system twice as fast as awake animals (see Oct 2013 news story on Xie et al., 2013).  Nedergaard and colleagues traced this improvement to an increase in the volume of the interstitial fluid. Blocking adrenergic signaling had the same effect, suggesting that modulators might be found to increase glymphatic flux and clear Aβ and other potentially toxic metabolites that accrue when neurons are active. The space where neurons interact with glia and blood vessels is where the field is poised to make much progress in the years to come.

Q: To what extent would a decrease in arteriole innervation in AD cause changes in cerebral blood flow?

Iadecola: The cholinergic vascular innervation from the basal forebrain should be affected in AD. Edith Hamel has done some work in this area (see Hamel 2004;  Vaucher and Hamel 1995).

Q: Which cell population in the neurovascular unit is predominantly regulated by norepinephrine? Epithelial cells?

Iadecola: Adrenergic receptors are widely distributed on the cells of the neurovascular unit. Brain vessels are not as responsive as peripheral vessels to adrenergic agonists with respect to changes in blood flow, but pericytes have been shown to be highly sensitive to these agents.

Q: Increased levels of Aβ have been suggested to be present in young carriers of AD mutations 20-30 years before the expected onset of disease, but in later stages there is a decrease in Aβ levels. What could be the mechanism, changes in clearance?

Iadecola: In familial AD the problem seems to be increased Aβ production, which is probably made worse by aging (through failure of the glymphatic system?) and reduced vascular function, which could slow down the clearance. The reduced CSF levels of Aβ42 are thought to be related to amyloid deposition in plaques.

Q: Can Dr. Iadecola comment on the relative contribution of vascular versus neuronal problems in AD? Which plays a larger primary role?

Iadecola: My understanding is that the main factor underlying the dementia is synaptic dysfunction. Therefore, the problem is ultimately neuronal. The vascular component is like to be a secondary event that amplifies the neuronal effects.

Iadecola: The levels of Aβ required and the potential relationships between astrocytosis and vascular dysfunction in AD have not been established, as far as I know.

Q: How do you think oxidative stress around blood vessels causes cell dysfunction? What is role of PARP [poly(ADP-ribose) polymerase]?

Iadecola: This is an area we are still working on and the details have not become clear, but PARP has been implicated in other forms of vascular oxidative stress.

Iadecola: It is conceivable. There is a hypothesis that increased vascular stiffness and vascular damage caused by CAA leads to reduced perivascular CSF flow (see Carare et al., 2013).

Q: Has anybody tested whether longer sleep slows down Aβ accumulation?

Nedergaard: David Holtzman's group at Washington University has shown that interstitial Aβ in the brain is lower during sleep than when awake (Kang et al., 2009). I am not certain whether he has tested the duration of sleep.

Q: Is the time of day important for the glymphatic system? For example, if you switched the sleep cycle of your mice, would that change the outcome?

Nedergaard: Great questions. No one has tested that to my knowledge. Remember that mice are always anesthetized during experimental stroke procedures.

Q: Are aquaporin 4 knockout mice more susceptible to ischemic lesions? Or do they have larger lesions after middle cerebral artery occlusion (MCAO)?

Q: Has anybody crossed aquaporin 4 knockout mice with other models … of AD, for example?

Q: Using mouse models, if we can increase the activity of aquaporin 4, would it be possible to clear up Aβ faster?

Nedergaard: I think so, but these experiments have not been done yet.

Q: Can Dr. Nedergaard comment on whether it is the CSF influx itself or any specific molecules in the CSF influx that is responsible for Aβ clearance?

Nedergaard: We believe it is just the flow in the CSF itself. It works like a dishwasher that clears anything left on the dishware.

Q: Do we know toxins other than amyloid that may accumulate with impaired glymphatic clearance that would account for other forms of dementia?

Nedergaard: Yes, I believe tau, for example, might fit that bill.

Q: Given the effects of norepinephrine on the glymphatic system, could anti-adrenergic treatment potentially be useful? Is there any data on this?

Q: Have you investigated the role of other neurotransmitters, such as serotonin and dopamine in glymphatic regulation?

Nedergaard: We have not studied that.

Q: How do the findings on the glymphatic system translate from animals to humans in view of the very unique features of glial cells in the human brain?

Nedergaard: We are testing these questions in humanized chimeric mice.