On 5 March 2009, we held a Webinar/Live Discussion with a slide presentation by Scott Small and Karen Duff, and a subsequent panel discussion with John Morris at Washington University, St. Louis; Michael Wolfe of Brigham and Women's Hospital, Boston; Bill Rebeck at Georgetown University, Washington, DC; and John Cirrito, also of WashU in St. Louis.

This live discussion began with a Webinar featuring a slide talk with audio provided via a telephone line. Following the talk, the audience moved to a chatroom for Q&A and discussion.

View/Listen to Webinar Recording
Click on this image to launch the recording. 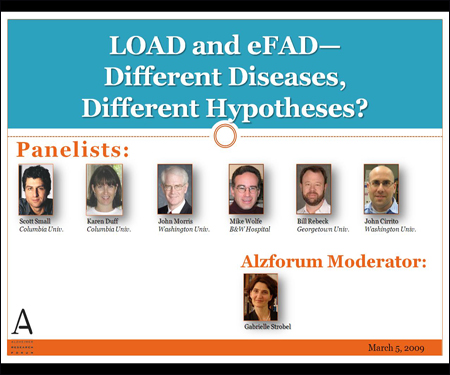 Note: Transcript has been edited for clarity and accuracy.

Gabrielle Strobel
Welcome again, everyone, to this typed portion of the discussion. Questions, comments, ideas?

Scott Small and Karen Duff
We’d like to respond to Mike Wolfe’s talk: We agree with his “triangulation” idea. In fact, in the review we state this explicitly. That is, Aβ can lead to tau phosphorylation. The question of which model fits best is therapeutically very important, however. Mike, what do you think of the evidence suggesting that presenilin mutations cause tau hyperphosphorylation: Is this all via Aβ?

Gabrielle Strobel
Mike Wolfe sends his apologies; he had to rush to go give a talk downtown. Scott and Karen, do you think we have evidence of failure of anti-amyloid trials? There is a strong sense among clinical trial people that it is premature to interpret the results available until now very much one way or the other.

Scott Small and Karen Duff
No, we were very careful to describe drug trials to date as “disappointing,” not as categorical failures. Response to John Cirrito’s talk: Our hypothesis is indeed tough to prove or disprove in humans. We suppose that is exactly what drug trials, if given early enough, will achieve. One way to prove the amyloid hypothesis, at least in early-onset familial AD, is to give anti-Aβ drugs to patients with APP mutations.

John Cirrito
Scott, I can envision a scenario where an Aβ-targeted clinical trial could succeed, but an upstream mechanism still exists. Aβ is still a linchpin in all the models of disease, so intervening could be beneficial and may at least slow the amount of tau that accumulates. That said, if an upstream initiator exists, it might be a better target.

John Morris
I apologize, but I have another appointment now so must sign off. It has been a privilege for me to participate in this Webinar; I have learned a great deal. Best wishes.

Gabrielle Strobel
Goodbye, John! A question to Karen, perhaps, but others, too: Industry’s focus on the amyloid hypothesis seems partly practical—it offers druggable, testable targets. Every time I ask pharma scientists about GSK3β, tau, ApoE (it’s a bit early for retromer components but I'll do that, too), they say they are not ignoring the science but have had no luck finding targets and compounds that actually make it into the clinical pipeline. Can the dual-pathway hypothesis help with that—i.e., reorganize knowledge so drug development can branch out?

Karen Duff
I think finding drugs that target tau should be a new priority for pharma. They can always be used in combination with anti-Aβ therapies, too. But targeting pathways that affect both Aβ and tau would be even more important. There are plenty of dual-pathway targets to explore, but it needs focusing on.

John Cirrito
Scott and Karen, I think the problem is, What should pharma target? With so many options that could affect Aβ and tau, what do they gamble on? I imagine most pharma will want good evidence that a particular pathway really plays a role before committing resources. Do you think it is a fair assumption that targeting one pathway will not necessarily "undo" other pathways?

Karen Duff
John, I do think it’s plausible for pharma to screen for drugs that target both Aβ and tau...seems “rational” to me.

Bill Rebeck
I think the ApoE4 problem might be loss of function rather than gain, and there could easily be more emphasis on drugs that promote ApoE levels or are ApoE receptor agonists. But I agree; pharma would like more evidence before investing too many resources.

Gabrielle Strobel
Yes, inspiring renewed focus would be a big contribution. Scott and Karen, you want to recommend some dual-pathway targets that are high on your list?

Scott Small
Gabrielle, I think I would first try to “prove” the dual-pathway with ApoE4, then develop drugs against ApoE4 specifically.

Gabrielle Strobel
How would you prove it?

Scott Small
From an experimental point of view, quite easily. For example, if ApoE4-expressing mice have both Aβ and tau, then cross them with BACE knockouts. If both Aβ and tau are reduced, this would support the serial model. If, as we predict, Aβ is down but tau phosphorylation is still up, this would support the dual-pathway starting with ApoE. We are gearing up to do these kinds of studies. My sense is there is indeed a reinvigorated effort to develop ApoE-based drugs at several companies, for example, Merck, but all preclinical still. We'll watch it.

Bill Netzer
Does the ApoE data really preclude the possibility that even in a mouse that is not overexpressing human Aβ, ApoE is still involved in endogenous Aβ metabolism/activity, and that the spine phenotype in these mice is the result of dysregulation of endogenous Aβ? It's, of course, possible (and testable in APP knockout mice). But there are simpler models based on other proteins, like ApoE receptors, that affect synapses and spines. I, of course, wonder about young humans with ApoE4; there are no indications that they have cognitive impairments beyond Alzheimer’s.

Bill Rebeck
One problem with the amyloid hypothesis is that it limits our thinking about the mechanism of actions of potentially helpful therapies. Statins are tested as to whether they affect Aβ deposition, not inhibit inflammation or increase blood flow. (Editor’s note: see recent paper about connectivity data in young ApoE4 data: Filippini et al., 2009.)

Bill Netzer
About James Nicoll's AN1792 Phase 1 paper (Holmes et al., 2008): Is there any likelihood that the two patients without postmortem Aβ pathology (and high anti-Aβ titers) had been misdiagnosed as having AD? The antibody titers could be coincidental or perhaps low antibody titers in some patients might be due to titration of antibodies by Aβ deposits (a bit of a stretch)?

Scott Small and Karen Duff
Bill, there were six patients with significantly or partially reduced Aβ in that paper and all died with stage IV pathology.

Gabrielle Strobel
John Cirrito and all, many studies have tried over the years to find direct links between Aβ and tau (i.e., how does the former influence the latter?), but did not find much beyond the general sequential finding that Aβ changes first in AD models. At least the precise mechanistic link is still unclear. Does that not support the point in the Perspectives article that both Aβ and tau independently change in response to something else, e.g., ApoE or GSK-3β? Bill Rebeck, this is following up on your earlier comment. There are many gain-of-toxic-function studies from the earlier years of study of ApoE, and as you know better than I, loss- versus gain-of-function was a debate for a long time. Can we now conclude that it's settled, that the ApoE4 isoform causes mainly a loss of function?

Bill Rebeck
I would agree on the loss of function for ApoE4, but I don't think it's a dead issue. Researchers like to argue everything.

Bill Rebeck
Thanks all; I have to go. It's been enjoyable.

Gabrielle Strobel
Bye, Bill; thanks for coming! Karen and Scott, suppose you had an ApoE- or retromer- or tau-based drug in hand that you could test. Given how late today’s trial designs would force you to initiate treatment, i.e., mild to moderate AD, MMSE around 25 or so, would you expect those dual-pathway drugs to have strong effects? In other words, is there consensus that earlier diagnosis and treatment are a huge priority for any prospective drug?

Gabrielle Strobel
Thank you, everyone! I hope this Webinar discussion offered food for thought. Thanks especially to Scott, Karen, and our panelists for your time and effort.

To most clinicians’ eyes, the early-onset genetic forms of Alzheimer disease (eFAD) progress in much the same way as the late-onset forms (LOAD) that make up the vast majority of the five million AD cases currently estimated for the U.S. The discovery of the underlying genes, their mutations, as well as manifold mechanistic studies in the ensuing mouse models and cellular systems since then, have reinforced a view that both eFAD and LOAD are expressions of the same disease, which is explained by a linear amyloid hypothesis that starts with Aβ, takes on board tau and inflammation, and ends with AD. There was always debate, and some researchers insisted that LOAD is a more heterogeneous syndrome that points to causes other than Aβ as well. But the main thrust of the field was on the amyloid hypothesis, in part because it offered tangible drug targets. Now anti-amyloid drugs are wending their way through human trials in people with late-onset Alzheimer disease, drawing eyes for a test of the amyloid hypothesis where it ultimately matters—in the clinic. It is too early to draw conclusions, but so far, the two drugs that made it through Phase 3 (i.e., Alzhemed and Flurizan) both flopped. Currently ongoing are Phase 3 trials of γ-secretase inhibitors and immunotherapies, whose Phase 1 and Phase 2 results have engendered debate about the vagaries and design of disease-modifying drug trials (see ARF related drug story; ARF drug story; ARF related story; and ARF related news story). More anti-amyloid approaches are entering Phase 1 and 2, too early to support conclusions.

At the same time, the field is united by an underlying consensus that Alzheimer disease treatment, like cancer treatment, eventually will feature combination therapy of different kinds of medication that hit different aspects of a complex disease. Could a broader model for LOAD inspire new efforts in this direction? To kick start this conversation, Scott Small and Karen Duff last November published a Perspective article in the journal Neuron. In it, they take stock of advances in other areas of AD research, and they use them to craft an alternative working hypothesis specifically for late-onset AD. Their dual pathway hypothesis places Aβ increase and tau hyperphosphorylation side-by-side and downstream of other factors that influence both Aβ and tau. These are ApoE4, GSK-3, and the retromer. Small and Duff propose their hypothesis to stand in addition, not competition, to the existing linear model of the amyloid hypothesis, which they view as underlying autosomal-dominant forms of AD. Rather, they suggest the dual pathway hypothesis as one of several possible alternatives that together could account for the more heterogeneous nature of late-onset cases.

The Alzforum editors express their gratitude to Neuron and Cell Press for graciously making Small and Duff’s Perspective article freely available at the Neuron website for this discussion. Scroll down to the Alzforum Webinar posting and take advantage not only of Small and Duff's article but also some additional papers that Neuron has released for free download.

Read the Perspective, mull it over, and bring your questions to a panel selected to represent scientists whose interests range across the topic areas included in the Perspective.