On 15 June 2009, we hosted a Webinar discussion with slide presentations by Ian McKeith at Newcastle University, UK, James Leverenz at University of Washington, Seattle, James Galvin, Washington University, St. Louis, Brit Mollenhauer of Paracelsus-Elena Klinik, Kassel Germany, and Walter Schulz-Schaeffer of the University of Goettingen and audio provided via a telephone line.

Editor’s note: Nearly 400 caregivers and scientists logged on for this 80-minute event. In addition, the Alzforum received more than 100 caregiver questions. This discussion aimed primarily at increasing awareness of DLB among scientists and physicians and therefore focused on scientific research, but clearly there is a great unmet need among patients and caregivers to have their questions addressed. The Alzforum editors have collected comments received in advance of the discussion and during the live hour into a caregiver comment page and are asking the panelists to respond to these questions. Please visit the Lewy Body Dementia Association website to view the first installment of answers to some of the most frequently asked caregiver questions. 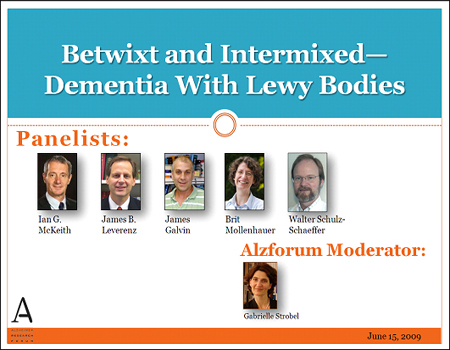 Dementia with Lewy bodies (DLB)—a disorder at the interface of AD and PD—competes with vascular dementia for second spot (after AD itself) on the list of most common causes of dementia among the elderly. If you just said “Huh!” to yourself, you are not alone. Most people wouldn’t know how frequent DLB is, judging by the vastly smaller amount of attention it receives across the board, from neurologists, psychiatrists, scientists, and funders. But this may be changing. Twenty years after DLB came to be recognized as a clinical and pathological category in its own right, a growing number of researchers from both the dementia and the movement disorder fields believe that AD and PD—formerly viewed as separate domains—are connected across a spectrum, and that DLB links the two. Investigators who formerly focused on one of the two established diseases at either end of the spectrum are now developing an active interest in this mixed disease. In DLB, patients suffer from various combinations of Alzheimer and Parkinson signs, which are compounded by frustrating fluctuations in symptoms, visual hallucinations, visuospatial impairments, and, in many cases, rapid decline. “DLB may provide a link between AD and PD that will help us understand both disorders better,” said Ian McKeith of Newcastle University, UK.

Since 1995, a series of targeted workshops have focused on DLB, and on its neighbor on the PD end of the spectrum (Parkinson disease dementia, aka PDD). The workshops have sharpened the clinico-pathological picture of these diseases to crisper definitions that are applicable in the clinic. Clinicians know now that DLB and PDD patients respond especially favorably to cholinesterase inhibitors as was predicted from their postmortem neurochemical pathology. This past March, the latest in this series of small meetings, held in the German city of Kassel, broke new ground by proposing working groups that are charged with hammering out a collaborative research agenda for both biomarker development and presymptomatic diagnosis. Another priority the scientists set is molecular pathogenesis research that aims to unravel how the three main proteins known to underlie this disease spectrum—amyloid-β, tau, and α-synuclein—conspire in various ways to drive an individual person’s disease. What’s more, a new player on the DLB/PDD/PD end of the spectrum recently burst on the scene in the form of glucocerebrosidase, an enzyme of lipid metabolism whose gene appears to underlie a significant number of cases, and whose modus operandi in disease urgently needs to be figured out.

The Alzforum this past week began an ongoing series of daily stories that summarize recent advances on this topic. They form the background material for this Webinar discussion. So that you can come armed with questions about the latest and greatest, consider reading the introduction about spectrum neurodegeneration, tau in Parkinson’s, dementia with Lewy bodies, oligomers in DLB, AD, brain imaging markers, fluid α-synuclein markers, fluid progranulin markers, Parkinson’s gene reshuffling, and GBA as DLB and PD gene.

Buoyed by such and other advances, the DLB/PDD scientists hope to disabuse the field at large, as well as physicians who see these patients, of the entrenched but quite possibly outdated notion that DLB is rare (they say it’s not), vague (ditto), of indeterminate relationship to AD and PD (ditto), and complex (yes, but tractable). Join us for slide presentations and subsequent discussion. Send in your questions and comments before the live hour by typing into the comment box below. During the live event on 15 June, type into the GoTo Webinar comment field on your screen and the moderator will pose questions to the panel.