Subtle alterations in the brain may help predict if people with mild cognitive impairment (MCI) will progress to Alzheimer’s disease (AD), according to a small study published in the January 30 Journal of Neuroscience. Using diffusion magnetic resonance imaging (MRI) techniques, researchers led by Gwenaëlle Douaud at the University of Oxford, U.K., examined gray and white matter microstructure in MCI patients. “Not only did we show, for the first time, significant microstructural differences between stable and progressing MCI populations, but these were also, to the best of our knowledge, the earliest abnormalities detected in MCI patients who later progress to AD," Douaud wrote in an e-mail to Alzforum. The differences were apparent 2.5 years before AD diagnosis, on average.

Brain abnormalities that predict AD could help researchers tailor interventions that may be most effective before the brain becomes severely compromised. Cerebrospinal fluid (CSF) protein biomarkers suggest early changes in the brain, but MRI gives researchers a picture of what is actually happening inside the skull. Most imaging studies have focused on macrostructural changes—alterations in volume, thickness, and shape that occur on a millimeter scale such as decreases in hippocampal volume; however, researchers are now realizing that subtler microscopic changes occur first. Diffusion imaging, which measures the movement of molecules through tissues, works at the micrometer scale, and reveals underlying damage that can occur in the absence of frank tissue loss. Using diffusion MRI, investigators have identified microstructural brain differences among healthy controls and individuals with AD and MCI. In a previous study, Douaud and colleagues identified microstructural deficits in the superior longitudinal fasciculus (SLF), a long bundle of association fibers that connects the frontal, temporal, and occipital lobes, in MCI patients compared with cognitively healthy controls (see Douaud et al., 2011). They determined that this microstructural change was evidence of a subtle degeneration not yet detectable in the corresponding gray matter regions using traditional MRI techniques.

In the current study, the investigators asked if those microstructural alterations predict impending AD. As part of the Early Alzheimer’s Disease Genetics—a Longitudinal Evaluation (EAGLE), a natural history study of AD run at the University of Basel, Switzerland, Douaud and colleagues compared 13 amnestic MCI patients who progressed to probable AD within 25 to 41 months (pMCI group) with 22 aMCI patients who remained clinically stable for at least three years following initial evaluation (sMCI group). All patients were scanned at baseline.

“The beauty of this study was the way they defined [the patient groups],” said Norbert Schuff of the University of California, San Francisco. The two groups of aMCI patients were matched by proportion of apolipoprotein E4 carriers, duration of symptoms, and neuropsychological assessment results, including episodic memory performance. However, the groups significantly differed in age; the pMCI patients were seven years older on average than sMCI individuals. In addition to diffusion MRI of gray and white matter brain regions, the investigators collected macroscopic MRI measures of gray matter and assessed total tau, phosphorylated tau, and β amyloid concentrations in patient CSF.

The diffusion imaging measures revealed differences between the two MCI populations. Mean diffusivity, a measure of random water molecule movement, of the left hippocampus best predicted future progression to AD, outperforming the traditional measure of gray matter atrophy in the hippocampus (see image below). What caused the structural change? The authors noted that it might be evidence of reactive astrocytosis, which others have reported in pMCI patients (see ARF related news story). 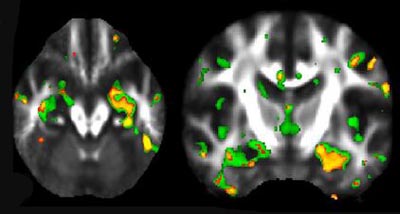 The investigators also found white matter differences in the fornix, left fimbria, and SLF. Diffusion anisotropy measures in the body of the fornix extending to the left fimbria were lower in pMCI than in sMCI. In addition, the pMCI group exhibited higher anisotropy measures in the region where the SLF and corticospinal tract cross. Although white matter changes have been reported in AD, they are often thought of as a comorbid effect, said David Salat of Harvard Medical School. “These findings are important to show that, in addition to cortical information, white matter changes are potentially useful in discriminating [those who progress to AD],” he said.

The investigators found that a combination of these and other biomarkers better predicted progression to AD than any one alone. With a composite of diffusion measures, traditional structural MRI data, and a CSF biomarker composite, the researchers claim 91 percent accuracy. Prediction accuracies reported in the literature vary widely, but this is in the “top range,” said Schuff.

Schuff and others praised the study for its careful design and thorough statistical approach, but noted that the study was limited by its small sample size and the age difference among the pMCI and sMCI groups. Even though the investigators repeated their analyses with a subset of the original cohort matched for age and gender and obtained similar results, the findings need to be validated by a larger study with age-matched stable and progressing MCI populations.

Hillary Hoffman is a science writer in Gaithersburg, Maryland.