Just as Google Earth has given an unprecedented view of our planet, down to individual streets and buildings, a computerized three-dimensional map called BigBrain now allows scientists to navigate through the entire human brain, down to the cellular level. With 50 times better resolution than the best 3D brain representation available until now, the map will benefit diverse areas of neuroscience, from neurogenetics to neurodegenerative disease, said project leaders during a teleconference. Researchers led by Katrin Amunts and Karl Zilles at the Research Centre Jülich, Germany, and Alan Evans at McGill University, Montreal, Canada, describe the map in the June 21 Science. The paper comes out at the same time as a report detailing a method to study small human brain sections in even finer detail via array tomography (see ARF related news story).

“This BigBrain project is a beautifully updated, mesoscale view of neuroanatomy that takes advantage of modern computation,” said Stephen Smith, Stanford University School of Medicine, California, who was not involved with the project but developed array tomography. “It will likely be useful to bridge all the different scales at which we need to study the brain.” Smith himself may use BigBrain to help fit the small pieces of tissue he studies at fine detail into the context of the entire brain. 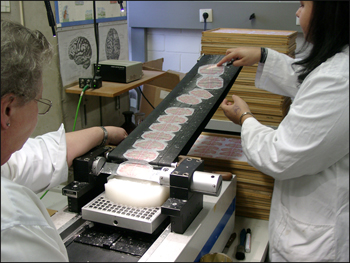 BigBrain. Researchers used a microtome to section the entire brain of a 65-year-old woman. Image courtesy of Science/AAAS

Current 3D brain models were assembled using magnetic resonance imaging (MRI) scans, which give a resolution of one millimeter (see Evans et al., 2012). They show overall brain areas, including subcortical nuclei, gyri, and sulci. BigBrain improves the resolution to 20 micrometers in each direction, revealing cortical layers, neuronal columns, and microcircuits that were previously only seen with two-dimensional imaging. BigBrain stops just short of resolving every individual neuron, as some are smaller than 20 micrometers. While high-resolution maps of mouse brains detail down to the micrometer scale (see Li et al., 2010), Amunts and colleagues were limited by computing capacity. That level of detail for the human brain would have required 21,000 terabytes (21 billion megabytes) of data—too large to explore interactively at today’s computer speeds.

To create BigBrain, Amunts and colleagues used a large microtome to shave the wax-preserved brain of a healthy 65-year-old female volunteer into 7,404 slices, each 20 micrometers thick. The researchers then used silver staining to visualize cell bodies. After digitizing these slivers, the researchers computationally aligned them and virtually reconstructed the brain in the sagittal and horizontal planes. They digitally fixed rips, tears, and folds, filled in missing pieces, and designed software to explore it all. The result is a highly detailed 3D reference map (see video below). 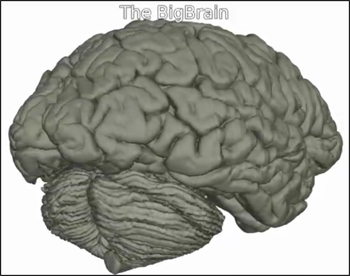 BigBrain allows navigation of the human brain at the microscopic level in three planes. Image courtesy of Science/AAAS

Researchers can now use this tool to improve other modalities, such as functional MRI and gene expression maps, said the authors in a teleconference. For instance, combining it with high-resolution data on receptor expression, such as that from the Allen Brain Atlas, will help distinguish different cell types. “If we understand expression patterns in the brain and connect them with the detailed anatomy, then we can [better] understand the relation between structure and function,” Zilles told conference listeners. In addition, the map will help refine computer models of brain connectivity and aid neurosurgeons with deep-brain stimulation or epilepsy surgeries.

Given that this template is built on a 65-year-old’s brain, it may have some applications for aging and AD, wrote Reisa Sperling, Brigham and Women’s Hospital, Boston, Massachusetts, to Alzforum in an e-mail. “There are some limits to the conclusions we can draw from a single brain template, as the human brain is amazingly variable along some anatomic and functional networks,” she cautioned. “Nevertheless, it is terrific to have a high-resolution template to use for future imaging studies as we attempt to link alterations in biochemical, functional, and anatomic pathways to early stages of disease.”

The researchers of BigBrain plan to establish links to a number of other projects that aim to map the human brain in detail. Several of the authors are involved in the Human Brain Project, a collaborative effort across Europe that aims to integrate varied experimental findings so that researchers can better model the nervous system. A group of U.S. scientists recently proposed the Brain Activity Map (see ARF related news story), which will reconstruct functional activity in complete neural circuits. It will complement the Human Connectome Project, an ongoing effort to trace the structural wiring of the human brain. In addition, a technology called CLARITY (see ARF related news story), which removes lipid material from the brain to render it visible by light microscope, recently joined efforts to visualize neurons and their connections.

Amunts and colleagues are in the process of creating other BigBrain datasets so that they can see variation between individuals. The current map is freely available here.—Gwyneth Dickey Zakaib