Robert Katzman was a pioneer in bringing the multidimensional problem of Alzheimer disease out of obscurity and into the forefront of medical, scientific, and social agenda of this country. As a physician-scientist, teacher-scientist, and activist-advocate, he cast a giant shadow. He was among the first to redefine Alzheimer disease as a major public health problem. Katzman's 1976 landmark editorial "The Prevalence and Malignancy of Alzheimer's Disease," published in the Archives of Neurology, and the 1977 Conference on Alzheimer's Disease (sponsored by NINCDS, NIA, and NIMH at the National Institutes of Health), which he organized along with his lifelong collaborator Robert Terry, and Katherine Bick, were important in attracting the attention of the medical-scientific communities. 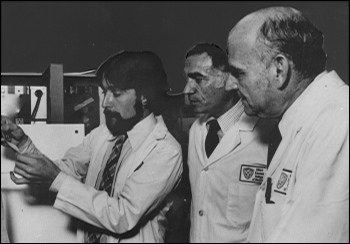 Robert Katzman was born 29 November 1925, in Denver. He completed his undergraduate studies at the University of Chicago and graduated from Harvard Medical School in 1953. He did his internship at Boston City Hospital and his residency in neurology at the Neurological Institute at Columbia-Presbyterian Hospital. He was chairman of neurology at Albert Einstein College of Medicine, in the Bronx, from 1964 until his move to the University of California, San Diego, in 1984. There he served as chairman of the department of neurosciences and the director of the Alzheimer's Disease Research Center, which was one of the first of five such centers to receive major support from the National Institute on Aging (NIA). He retired in 1995 as a professor emeritus of neurosciences.

His research interests were eclectic, covering a broad range of topics from neurochemistry to neuroepidemiology. His scientific career began at Harvard and at Einstein College of Medicine when he studied the movement of potassium ions and amino acids across the blood-brain barrier. He gradually moved toward an interest in the edema that occurs in response to toxins and tumors, and in the composition of cerebral spinal fluid. In the early 1970s, his research at Einstein began to focus on Alzheimer's and Aging (Bronx Aging Study). In collaboration with Robert Terry, an Einstein neuropathologist who had studied Alzheimer's since 1960, Katzman began systematic studies of clinical-pathological features of the disease. At Einstein, the Katzman-Terry team began to recruit, train, mentor, and collaborate with talented new investigators, both basic scientists and clinicians. Thus, Katzman and Terry became the major progenitors of the new wave of investigators that eventually became leaders in the field.

In the mid-1970s Katzman played a key role as an advisor in my efforts to develop the brain aging and Alzheimer's research programs at the National Institutes of Health. He was one of the handful of people who helped launch the Alzheimer's Association; he served as the first Chair of the Medical and Scientific Advisory Board and helped to start the Association's research support program. In subsequent years he served on numerous committees and Boards in an effort to promote the cause of Alzheimer's.

Robert Katzman's impact on the field cannot be overstated. Without his relentless effort to advance the research, either directly by his own work or through his students and collaborators, the field of Alzheimer's would still be obscure. The community mourns the loss of a giant leader.—Zaven Khachaturian.