The spread of toxic α-synuclein through the brain is not just for transgenic mice anymore. A new study from Virginia Lee and colleagues at the University of Pennsylvania School of Medicine, Philadelphia, suggests that toxic α-synuclein creeps between functionally connected areas in the wild-type mouse brain, killing dopaminergic neurons and causing motor difficulties in the process. As reported in the November 16 Science, one tiny injection of misfolded, fibrillar, synthetic α-synuclein recruits native protein and converts it to a pathogenic form, setting off a neurodegenerative cascade. Since the mouse expresses only wild-type α-synuclein of its own species, as do most humans with the disease, this injection model could be the closest yet to simulate pathogenic protein templating in sporadic forms of Parkinson’s disease. Results could have implications for treatments targeting protein transfer, write the authors.

“This study more or less nails down the causation of many idiopathic forms of Parkinson’s disease,” said Lary Walker, Emory University, Atlanta, Georgia, who was not involved in the work. “It shows that this process can be initiated simply by a misfolded and aggregated seed that induces further protein misfolding and aggregation.”

First author Kelvin Luk and colleagues injected a small amount of misfolded, synthetic mouse α-synuclein into the dorsal striatum of wild-type C57BL6/C3H mice. After one month, hyperphosphorylated α-synuclein (an indication of synuclein-laden Lewy bodies) showed up around the injection site and in connected areas on the same side of the brain, including cortical layers IV and V and the olfactory bulb. As Lewy bodies in these areas multiplied over the next three to five months, inclusions also began turning up in additional connected areas—the neocortex, ventral striatum, thalamus, and occipital cortex. The pattern suggested that the injected fibrils acted as seeds that converted native α-synuclein to a pathogenic form, which then aggregated, crept through functionally linked areas, and converted more native protein. Pathology also spread the same way after injection of two other wild-type mice—CD1 and C57BL6/SJL. Researchers call this process templating (Hardy and Revesz, 2012). 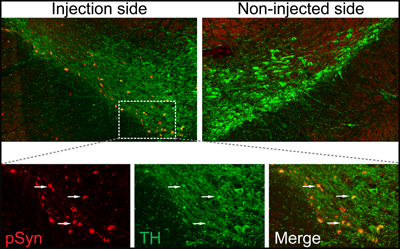 “The study demonstrates the direct link between the formation of Lewy bodies and the demise of dopaminergic cells,” said Lee. It also confirms that “spread of the pathology is not random; it follows areas that are functionally connected to each other.” She and her team are currently letting these mice age further to see if they begin to show cognitive deficits late in life, as do people with α-synucleinopathies. The injection model may also be suitable for testing therapies that target protein transmission in sporadic forms of the disease, said Lee.

Injection of the preformed α-synuclein fibrils could mimic a process that, in humans, occurs in the context of aging, said Walker. “As cells get old, they become less able to deal with protein misfolding.” He suggested that at some point, seeds of aggregated proteins accumulate and then move to other brain areas where they encounter normal proteins and convert those to toxic forms.

The next important step is to decipher the actual mechanism by which these misfolded proteins transfer between neurons, said Marc Diamond, Washington University, St. Louis, Missouri. “How do aggregates get into a neuron and how do they seed? How do they contact the normal protein? How and where does that conversion event happen in the cell, and how do aggregates get out?” Answers to these questions could help guide therapies that target pathological spread of proteins in PD, AD, and related neurodegenerative diseases, he told Alzforum.

The ability of wild-type α-synuclein to convert to a pathological form and then spread fits in with the idea that pathology actually starts in the gut, said Jeffrey Kordower, Rush University, Chicago, Illinois, who was not involved with this particular study. Developed by Heiko Braak and considered by some to be far fetched initially, this idea has gained support recently (see ARF related news story). The enteric nervous system is riddled with Lewy bodies long before they are found in the brain or before motor symptoms emerge (see Braak et al., 2006).—Gwyneth Dickey Zakaib