In the human body, a complex series of factors combines to turn a stem cell into a specific cell type. In the petri dish, neuroscientists try to mimic that process as closely as possible, figuring out the right combination of factors that will coax a pluripotent cell into a specific neuron. Lorenz Studer, of the Memorial Sloan-Kettering Cancer Center in New York City, and colleagues have found a new cocktail for creating midbrain dopamine neurons from human pluripotent stem cells. Not only do the newly created cells engraft efficiently into models of Parkinson's disease and alleviate symptoms, but they also do not have the tendency to overgrow the transplant site—a problem that has hampered some previous graft attempts. The results appear in the November 7 Nature.

"This is a spectacular breakthrough that the stem cell field has been waiting for a long time," wrote Marius Wernig of the Stanford School of Medicine in California in an e-mail to ARF. Wernig, who was not involved in the study, added that it "looks as if these ES-cell-derived cells meet all the criteria required for a therapeutic application."

For many years, scientists thought, based on mouse and embryo studies, that two key factors—sonic hedgehog homolog and fibroblast growth factor 8—would be enough to induce embryonic stem cells to form dopamine neurons like those in the midbrain, Studer said. "It turns out that in human cells, that is not enough," he added. Studer and his team realized that the Wnt signaling pathway, active in interactions between cells during embryogenesis, was also required. In their study, first author Sonja Kriks added into the mix a glycogen synthase kinase 3β inhibitor to activate Wnt signaling in human midbrain floor-plate cells derived from embryonic and induced pluripotent stem cells. The floor plate of the developing human brain gives rise to dopaminergic neurons. The result was a high yield of dopamine-producing midbrain cells. "It was exactly what was needed to make the right cell," Studer said.

In vitro, these cells survived long term. They expressed markers specific to midbrain dopamine neurons, including LMX1A (a roof plate marker) and FOXA2 (a floor plate marker). The roof and floor plates lie at opposite ends of the developing neural plate, and only cells in the midbrain express markers characteristic of both. Electrophysiological profile tests further characterized the final cells as dopaminergic; they had a slow rate of spontaneous spikes and a slow, subthreshold oscillatory potential.

A principal goal of this line of research is to create cells suitable for disease therapy. To test this, Kriks and colleagues injected these cells into the striata of two 6-hydroxy-dopamine-based models of Parkinson's disease. They injected the chemical, which selectively destroys dopaminergic neurons, into immune-deficient NOD-SCID IL2Rgc-null mice) and into rats immunosuppressed pharmacologically with cyclosporine A. The injected neurons (150,000 cells in the mice and 250,000 in the rat) corrected loss of motor control in various limbs, according to three separate behavioral measures.

Could these cells be used to treat Parkinson’s disease? Potentially lethal problems associated with cell therapies are cell overgrowth and tumors that result from runaway proliferating cells. Neither was an issue in the current study, even though NOD-SCID IL2Rgc-null mice are prone to develop tumors. Studer said the absence of overgrowth likely has to do with the floor plate cells used to produce the neurons. Unlike rapidly dividing precursor cells, floor plate cells are differentiated and tend not to overgrow.

The number of neurons needed for primate tests and, eventually, human therapy dwarfs that required for rodents. Could the technology be scaled up? It turns out, yes. The Sloan-Kettering team produced and injected 50 million of these neurons into three brain areas of two adults from an MPTP-lesioned rhesus monkey model of PD—the first time, to their knowledge, that human dopamine cells have been grafted into primates. After one month, the neurons survived without overgrowth (see image below). The team did not obtain behavioral results from the primates in this initial experiment, but will explore them in ongoing and future studies. 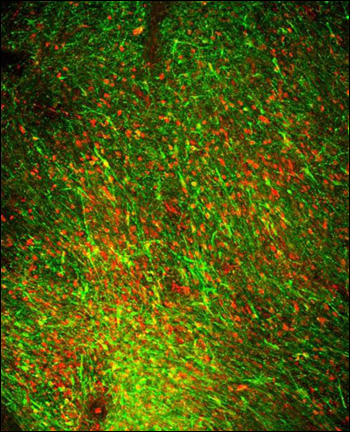 "Being able to scale up production of the correct cell type gives hope that we could generate enough cells to do safe clinical trials where only the active cell, not a mixture of cells, is transplanted" said Ole Isacson of Harvard Medical School in Belmont, Massachusetts, who was not involved in the study.

Past efforts to implant mixed fetal neural cells (not differentiated induced pluripotent stem cells) into human Parkinson's patients have met with partial success. Transplanted cells have been shown to survive for up to 16 years, though postmortem studies indicate these cells may become affected by Parkinson's pathology (see ARF related news story on Mendez et al., 2008). Studer saw no evidence of pathology in the transplanted cells of the current study. He said he does not consider susceptibility to pathology an obstacle to the therapeutic use of these cells. A small percentage of transplanted cells is known to be affected in humans, and the phenomenon does not correlate with the graft’s function, he told ARF.

Next, Studer plans to conduct safety and efficacy tests in primates. He hopes to show that the cells can be produced in clinically relevant settings and further improve their yield and purity. He especially wants to make sure these neurons cause no uncontrolled movement. Dyskinesia was one of the side effects of fetal cell transplants in humans, and was possibly due to contaminating serotonergic cells (see ARF related news story on Politis et al., 2010) or a dopamine overdose (see ARF related news story). If the tests pan out and no other unforeseen obstacles arise, these neurons could be three to four years from clinical trials for Parkinson's disease or other dopamine-associated diseases such as schizophrenia and various forms of addiction, Studer said.

Meanwhile, scientists will continue to explore other means of getting dopaminergic neurons, such as direct conversion from fibroblasts (see ARF related news story on Caiazzo et al., 2011 and Pfisterer et al., 2011), said Wernig. "It's important to continue with both approaches until we really know what is going to work in the clinic," he added.—Gwyneth Dickey Zakaib