Science fiction often portrays a future where intelligent robots take over menial tasks and make people’s lives easier. In yet another example of life imitating art, many researchers are studying artificial intelligence as a means to improve in-home care for impaired elders and lessen the burden on their caregivers. Several groups are designing interactive talking devices or crude robots to guide cognitively impaired people through simple household tasks. Such machines are still in a primitive stage, nowhere near the level of sophistication of fictional movie androids. Even so, they may conjure up uneasy feelings in people accustomed to Hollywood portrayals of treacherous computers such as Hal 9000, the artificial villain in 2001: A Space Odyssey. It remains to be seen how comfortable people will be allowing robots to help out with an elderly loved one.

For their part, researchers worry about making the machines intelligent and flexible enough to adapt to the vast range of real-world, hard-to-predict situations they may confront in eldercare. As anyone who has ever argued with a computer knows, machines can be frustratingly limited in their responses. Due to these challenges, the development cycle for one piece of technology can take up to 10 years. With many interactive devices in the pipeline, however, researchers predict we will see some on the market within a few years.

One such researcher is Alex Mihailidis at the University of Toronto, Ontario, Canada. Mihailidis develops “intelligent homes” that adapt to the habits of their occupants and notice when they need help. His work at the Intelligent Assistive Technology and Systems Lab takes the idea of home monitoring systems a step further, by adding a computer brain that can interact with people. One project, called “The COACH” (Cognitive Orthosis for Assisting with aCtivities in the Home), uses interactive software to prompt adults with Alzheimer’s disease to complete simple tasks, such as washing their hands or brushing their teeth. The COACH’s hardware consists of a small webcam and an LCD screen installed on the wall. If the COACH sees that a person is struggling to wash her hands properly, for example, leaving out steps or becoming confused, the COACH either prompts the person verbally, using a recorded human voice, or shows a picture of what she needs to do next. 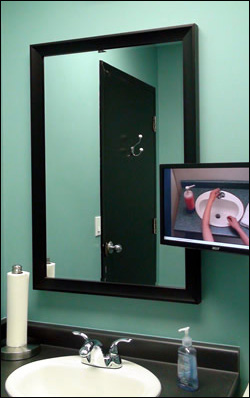 Might people find prompting from a robot irritating? Mihailidis has seen no evidence of that so far. In early trials with people who have moderate to severe AD, most patients did not even realize they were interacting with a computer. “They tend to think their caregiver is outside the washroom giving them instructions,” Mihailidis said. “The key thing is the use of artificial intelligence, so the system can learn about the person and adjust the prompts to those that work best.” Mihailidis has conducted three sets of trials in the lab that showed the COACH improved the ability of cognitively impaired adults to wash their hands. The COACH was well received by patients and their caregivers, Mihailidis claims. In the next trial, he will install the system into the homes of participants to see how it performs in real life. Mihailidis estimated that some version of this technology might become commercially available within three years.

Being confined to a particular room limits the COACH. To expand "his" range, Mihailidis and colleagues installed "him" (or "her") on a small mobile robot; the LCD screen forms the robot’s head. In a pilot study of five people with AD, the robot was again able to guide them through tasks such as washing hands and making tea. “We found positive results with respect to people’s ability to follow the prompts and to accept the robot,” Mihailidis said. Patients reported that they interacted with the robot the same way they would with a person, and said they liked having it follow them around the house. “Quite a few of the caregivers said they wished they had something like this in their homes right now to help out,” Mihailidis added.

One challenge with this technology is keeping the price low. “We are trying to develop everything almost as a consumer product,” Mihailidis said. A caregiver should be able to buy the machine from a local electronics store, bring it home, and turn it on, and the device should operate without further effort required on the part of the users.

Will robots really make good caregivers for the cognitively impaired? Hollywood has already playfully imagined complications that might occur. The 2012 independent movie Robot and Frank centered on Frank, an older man with mild cognitive impairment whose children buy him a robot helper. Unfortunately, Frank is a retired cat burglar who co-opts his robot into helping him plan a new heist, which the robot allows because the excitement and challenge of planning the escapade stimulates Frank’s mental skills. Though real-life robot helpers are unlikely to help plan larceny, machines may not be able to adapt to all the situations that a cognitively impaired person might get into. Most researchers foresee such machines operating under the supervision of caregivers, not replacing them. Mihailidis noted that robots need to be self-aware enough to notice when their efforts are not helping and summon human caregivers.

The ability of computer brains to adapt and react intrigues researchers other than Mihailidis. Diane Mahoney at MGH Institute of Health Professions, Boston, Massachusetts, for one, is developing computer software to help impaired adults dress themselves. Mahoney picked this task because, in focus groups, caregivers identified helping with dressing as their most pressing daily concern for loved ones with early to moderate AD. At this stage of the disease, people have the physical ability to dress themselves, but they mix up the sequence, putting underwear above trousers or wool sweaters under shirts. Or they lose focus midway through. Caregivers often spend 45 minutes per day directing and cueing elderly parents through the process. This can cause tension and exhaust the caregiver, Mahoney said.

In collaboration with Winslow Burleson at Arizona State University, Tempe, Mahoney is building a prototype system that can be installed on a dresser or chest of drawers. An iPad sits on top of the dresser to provide visual feedback, iPods give verbal cues, and contact sensors record when drawers are opened or closed. The software is “context-aware” and adaptive, Mahoney said. This means that when the system detects a senior having a problem dressing, it will provide either verbal cues such as, “Open the top drawer. Take out a shirt,” or visual cues, such as a picture of a shirt. In addition, a wristband worn by people with AD senses their emotional state by changes in galvanic skin resistance, which measures physiological arousal. If the wristband detects that the senior is becoming agitated, the system will change its cues or play calming music, and if that does not work, will summon the caregiver to intervene. If the person with AD has a good day and gets dressed without a hitch, the system stays silent.

This last feature is important. “Caregivers want to embrace those moments of lucidity, not stifle them,” Mahoney said. People in the focus groups stressed that this sort of technology would empower their relatives to care for themselves. “At a stage when [people with AD] are losing so much, it gives them an acceptable crutch,” Mahoney said.

The system aims to reduce stress on the caregiver. In previous research, Mahoney saw that, “If we can give a caregiver a half-hour’s break and use technology for a safe, distracting activity, that helps reduce the perceived burden. Caregivers are enthusiastic about trying this, because their job is so demanding. Any new tool is appreciated.”

Across the Atlantic in Dublin, Ireland, researchers at the Technology Research for Independent Living (TRIL) Centre are also looking for ways to alleviate caregiver stress. They are developing tablet-based software applications that provide educational material and a peer support network for relatives of AD patients. In addition, caregivers could use the system to report patient health data to providers. “It’s a communications and support platform,” said academic director Brian Caulfield. “We are not just asking the caregivers for information on how patients are doing, but also how they are doing. That will influence the type of support educational material that is delivered to the caregivers.” Principal investigator Brian Lawlor at Trinity College Dublin is currently conducting user evaluations on the prototype.

Other groups are thinking bigger than home or portable app design. Intel Corporation, Santa Clara, California, is collaborating with the Chinese government and industry on an initiative called “Age-Friendly Cities” (see Intel blog). This means creating an urban and rural infrastructure, supported by an integrated information technology network, that makes services more accessible to older adults, communications manager Charing Riolo told Alzforum. For example, a person’s cell phone might tell her where the city bus is on its route, and when she should leave her house in order to catch it, Riolo said. “It’s about making everything seamless and comfortable so that an older person can stay active.” The communications network would facilitate remote patient monitoring, social networking, and caregiver support, with the ultimate goal of keeping people in their homes and reducing institutionalization.

Such a future city may sound utopian to some, but to others it will likely conjure the “Big Brother” image of intrusive surveillance. Designers have to find ways to allay such fears and build in personal control before such far-reaching technology will be accepted. For a look at projects that aim to maintain the cognitive health of seniors, see Part 4.—Madolyn Bowman Rogers.