Researchers attempting to spy tau pathology in the living human brain have come up with a trio of options. In the September 18 Neuron, brain imagers from the National Institute of Radiological Sciences in Chiba, Japan, present the first publication on the newest member of the triad, PBB3. In contrast with the other two classes of tau tracer, preliminary experiments with preserved brain slices indicate that PBB3 might light up all forms of tau aggregate, including Alzheimer’s neurofibrillary tangles as well as other inclusions found in tauopathies such as Pick’s disease. The researchers imaged tau with PBB3 in one person with corticobasal degeneration (CBD, see image below, with focal uptake in the midbrain). 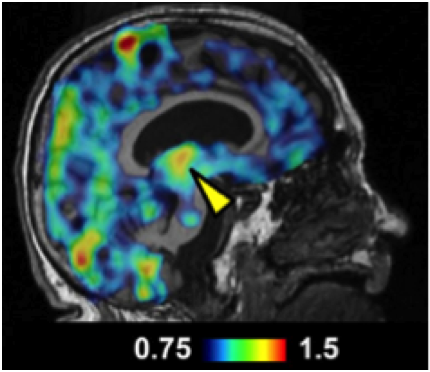 “PET imaging of tau with PBB3 would serve for differential diagnosis among Alzheimer’s disease, non-Alzheimer tauopathies and tau-negative dementias,” suggested senior author Makoto Higuchi in an email to Alzforum.

Besides PBB3, researchers have developed a class of tracers called THK for their origins at Tohoku University in Sendai, Japan, and another series called T807 and T808, originally developed at Siemens and now under study at Avid Radiopharmaceuticals, as covered by Alzforum at the Alzheimer’s Association International Conference in July in Boston (see Alzforum News story). All three sets have undergone study in a handful of human subjects. “The question is, will any of the three cut the mustard?” commented Bill Klunk of the University of Pittsburgh in Pennsylvania. Plenty of validation will be required. In particular, the researchers will need to await the time when they can perform autopsies on the people they scanned with PET tracers, to confirm that the tracer signal reflects the pathology the volunteers had their brain.

While the full data are not yet in, so far the Tohoku and the Siemens/Avid compounds appear to recognize only certain types of tau deposit. In addition to Alzheimer’s tangles, Avid scientists expect their ligands will bind tau pathology in Pick’s disease, chronic traumatic encephalopathy (CTE) and frontotemporal dementia (FTD). The researchers working with the THK compounds expect to see a signal in AD, CTE and Down’s syndrome. PBB3 looks promising because of its unique claim to bind all forms of tau aggregate, said Klunk. He called the PET signal in the person with CBD “very encouraging...the first report of what appears to be a successful PET imaging of tau in a non-AD tauopathy.” Tau-based diseases beyond Alzheimer’s particularly need such ligands, he said, because while amyloid PET can rule out amyloid in non-AD dementias, it tells doctors nothing about what pathology is present in those cases.

The Chiba research group, led by joint first authors Masahiro Maruyama and Hitoshi Shimada, began their tracer hunt with the observation that an early but poorly selective tau tracer, FDDNP, binds beta sheet aggregates (Small et al., 2006). They tested several fluorescent compounds that interact with beta sheets in brain sections from AD and other tauopathies. In this screen, the compounds that bound a wide variety of tau lesions included those with a backbone longer than 13 Angstroms. Therefore, the researchers modified the amyloid dye thioflavin-T by extending the backbone, leading to a class of five phenyl/pyridinyl-butadienyl-benzothiazoles/benzothiazoliums—PBBs—that they examined further in brain slices. This led to candidates that were selective for tau but not amyloid-beta, and labeled tau in brain sections from AD as well as Pick’s disease, progressive supranuclear palsy (PSP), and CBD.

“It was clever chemistry,” said William Jagust of the University of California at Berkeley, who was not involved in the study said. In a preview accompanying the paper, Klunk and his colleague Chet Mathis noted the interesting similarity between PBB3’s structure and that of the fibrillar amyloid-beta tracer PiB. The main difference is the longer backbone, which changes the molecule’s affinity from amyloid to tau. Klunk and Mathis co-discovered PiB.

Next, the researchers tested their tracers in mice expressing human proline-301-serine tau. Using in-vivo microscopy, they saw fluorescent PBB labeled tau in the brainstem and spinal cord. In PET scans on the mice, the tracers rapidly entered the brain, labeling tau structures in the brain stem and striatum, which matched the tau structures identified in postmortem sections of the same mice. The researchers identified PBB3 as the tracer with the highest contrast in the animal PET scans.

Finally, the scientists test-drove carbon-11 PBB3 in three people with Alzheimer’s and three control subjects. In people with AD, PBB3 labeled the medial temporal region, as well as the limbic region, precuneus, and lateral temporal and frontal cortices. And in the person with CBD, PBB3 accumulated in the neocortex and subcortex. The researchers next aim to test PBB3 in people with mild cognitive impairment, FTD, and CTE. Higuchi hopes that the distribution of tau will help differentiate the conditions.

PBB3 differs from the THK tracers and Avid’s compounds in that it relies on carbon-11, as opposed to fluorine-18, for the radioactive signal. Carbon-11’s short half-life requires an on-site cyclotron to synthesize the tracer the day of use. In research labs, this is no problem, and could even be an advantage, the authors pointed out. “I like working with carbon-11, because the half-life is short and you can do a number of studies in a day,” agreed Jagust. However, carbon-11 is impractical for widespread clinical use. Higuchi and colleagues are pursuing fluorine-18-labeled PBB compounds. Meanwhile, they plan to share their materials with carbon-11-equipped research centers, Higuchi wrote.

There are still questions to be answered about PBB3’s utility. Klunk noted that the signal was fairly weak, and wondered how much tau had to be present before the tracer lit it up. Ideally, researchers would want a sensitive tracer with a wide dynamic range that can identify subtle, early tau lesions.—Amber Dance