As an army medic in Iraq, Specialist Kara Wooten was caught in the blast radius of improvised explosive devices six times. The first five rattled her brain but left her conscious; the last one knocked her out. Two months later, Wooten began to have severe headaches, muscle spasms, seizures, and lost her balance. Vision problems developed, as well as weakness on her left side. A history major in college, she soon struggled to speak, forgot common words, and had trouble remembering. She was diagnosed with traumatic brain injury caused by multiple mild concussions.

Wooten’s story appeared in the Santa Cruz Sentinel in 2008, but has become only more relevant since then. Wooten is one of an estimated 200,000 service members who have sustained brain injuries since the year 2000, according to statistics from the Defense and Veterans Brain Injury Center (see stats). That is about 10 percent of the roughly two million military personnel who have served in Iraq and Afghanistan. Her fate leads this series on Alzforum for two reasons. First, science is recognizing the scale of the problem and tackling its potential implications for premature dementia. Second, Veterans Affairs hospitals contacted by this reporter have been unwilling to make additional veterans available to tell their stories.

The wars of the last decade have highlighted the effects of traumatic brain injuries (TBIs) and post-traumatic stress disorder (PTSD), with hundreds of thousands of young people bringing home these invisible wounds of war. Science still does not understand all of the long-term consequences of the conditions, but a growing body of research suggests these injuries may hasten pathogenic processes that lead to dementia. Several scientists contacted by this reporter fear that young soldiers and athletes with brain injuries could be at risk for prematurely aged, degenerative brains. Worse, current treatment options for both disorders are limited to symptom management. To tackle the problem, organizations like the Department of Veterans Affairs are launching new initiatives that have lured Alzheimer’s researchers to study these issues. VA programs encourage scientists to focus on novel treatment strategies and explore the genetic underpinnings of susceptibility and recovery. Other agencies are sponsoring a TBI conference to be held this June to bring together civilian and military researchers to share the latest data in this field.

Most tellingly, the new budget passed by Congress 14 April 2011 includes $15 million to create an Alzheimer’s Research Grant Program within the Department of Defense. The research focus will include investigations into the links among Alzheimer’s disease (AD), TBI, and PTSD. This grant is all the more remarkable in an otherwise punishing budget climate where overall funding for the National Institutes of Health was cut (see ARF related news story, or a press release from USAgainstAlzheimer’s).

This series surveys current research, underscoring the many unanswered questions that remain. Part 2 will focus on severe brain injuries, which have been shown to spur Aβ peptide deposition and increase the risk of AD. In Part 3, the spotlight will shift to sports medicine, where the data show that athletes who suffer repeated mild concussions can develop a unique form of brain degeneration. Part 4 will look at emerging data from veterans who were exposed to multiple blasts. Neuroimaging from the brains of these young people shows patterns of degeneration typically seen in elderly people with mild cognitive impairment. Part 5 will cover the controversial link between PTSD and dementia and review conflicting data. The series will wrap up with a look at some of the initiatives to study PTSD and the efforts to find effective treatments.

Brain injuries are more prevalent in the current conflicts than in any previous war. Improvised explosive devices are in widespread use. Thanks to improved body armor, soldiers and marines now survive blasts that would once have killed them. The flip side of this advance is that more service members are walking away with invisible wounds, head injuries whose effects may not become apparent for weeks, months, even years. About three-quarters of these TBIs are classified as “mild,” meaning they involve only a brief period of disorientation or unconsciousness. Growing research indicates that repeated mild TBIs can have serious, long-lasting consequences on the brain, as they did for Wooten. The initial injury may go unnoticed and untreated, which means TBIs are often underdiagnosed. In a telephone survey of 2,000 returned service members, almost 20 percent reported experiencing a brain injury (see Stein and McAllister, 2009), twice the percentage that is officially diagnosed. 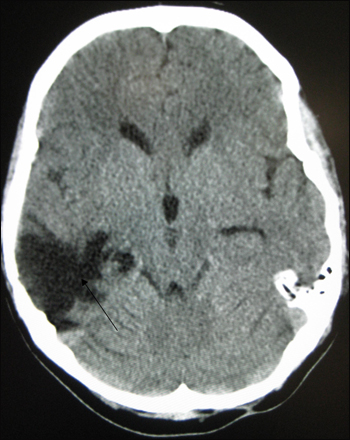 Elaine Peskind at the VA Puget Sound, Seattle, Washington, a noted Alzheimer’s researcher who studies brain trauma in veterans, believes that the number of military personnel affected by TBIs will go even higher as service members are repeatedly deployed. For example, in one U.S. Army brigade that served in Iraq, almost 23 percent of them were diagnosed with TBI (see Terrio et al., 2009). Peskind also notes that in her small study of 35 veterans with TBI, the men had been caught in an average of 16 blasts each. She predicts that this high frequency of exposure will become more common as deployments increase. Peskind’s neuroimaging data on young veterans are featured in Part 4 of this series.

Another invisible disorder that often goes along with TBI is post-traumatic stress disorder. PTSD is a cluster of anxiety-related symptoms that sometimes follow traumatic events. In surveys of service members returning from Iraq and Afghanistan, 8 to 16 percent of them admit to PTSD symptoms (see Milliken et al., 2007 and Smith et al., 2008), although the stigma attached to them makes it likely these symptoms are underreported (see Stein and McAllister, 2009). Since the types of events that cause traumatic brain injury also cause severe combat stress, the two conditions are often linked. Peskind estimates that in her studies, about three-quarters of the veterans with TBI also have PTSD, and vice versa.

Both TBI and PTSD involve changes in the brain. Neither condition is well understood yet, but research in these areas is heating up. Many scientists contacted for this article stressed that this is a field in its infancy. One of the biggest concerns is that in epidemiological studies, both TBI and PTSD have been linked to an increased risk of developing dementia (for details, see Part 2 and Part 5). The evidence for a causal role in dementia is stronger for TBI than for PTSD, but in neither case has such a link been conclusively proven.

The questions outweigh the answers right now, but there is a growing interest in research into these conditions. For example, the Third Federal Interagency Conference on Traumatic Brain Injury will take place 13-15 June 2011 in Washington, DC. The last such conference was in 2006. Talks run the gamut from the role of Aβ in TBI, to neuroimaging and biomarkers, with special emphasis on prevention, diagnosis, and treatment. In the amyloid session, Mark Burns, an AD researcher at Georgetown University in Washington, DC, will discuss evidence from animal models demonstrating that reducing Aβ levels can improve brain health after injury. His fellow presenters will talk about what happens to the Aβ that accumulates in damaged brain tissues, as well as the possibility of using Aβ as a biomarker for TBI, Burns wrote in an e-mail to ARF. “There has been growing interest in AD-related pathways both acutely and chronically after TBI,” Burns told ARF. “TBI is thought to be a risk factor for the development of AD in late life.” Another presenter, Milos Ikonomovic at the University of Pittsburgh, Pennsylvania, wrote to ARF: “It is now recognized that, similar to severe TBI, repetitive head injuries in high-contact sports and modern warfare can result in pathological and clinical changes characteristic of chronic neurodegenerative disorders including AD.”

Sam Gandy, at the Mount Sinai Medical Center in New York City, thinks it will take a concerted effort for scientists to get a handle on brain injuries. Pointing to the need for more data and larger brain banks, he suggests the TBI field could benefit from a network of nationwide research centers, similar to the Alzheimer’s Disease Research Centers, that could share resources. TBI is complex, Gandy told ARF, because it consists of several related disorders: single mild brain injuries; repeated concussions such as many athletes sustain; severe brain injuries; and military brain injuries caused by explosions, which may also involve PTSD. These probably all have distinct pathology and require different treatments, Gandy suggests (see DeKosky et al., 2010).

The evidence that brain injuries spur early degeneration, such as that suggested by Peskind’s VA-funded imaging studies on young veterans, is enough to concern researchers at the Department of Veterans Affairs. Tshaka Cunningham, who runs the research program on aging and neurodegenerative diseases at the VA, told ARF that the issue of increased dementia risk is on his radar, and with this comes funding opportunities for AD researchers. In 2005 the VA solicited research on Parkinson’s disease, Alzheimer’s disease, and other neurodegenerative disorders, and in 2008, it launched an initiative to promote research on traumatic brain injury. Cunningham said the VA encourages research proposals on AD, and particularly on potential treatments, anything from novel Aβ-lowering compounds to vitamin therapy.

“We are keen to understand if there are downstream consequences for these brain injuries,” Cunningham said. “We are trying to stimulate more research in the field on that exact problem.”

Additionally, the VA would like researchers to explore the contribution genes make to health disorders, and particularly to recovery. For example, what makes some people more resistant to PTSD, or allows them to bounce back faster from brain injury, than others? In January 2011, the VA launched the Million Veteran Program to try to pin down some of these genetic factors. The project will collect DNA as well as health and lifestyle information volunteered by veterans receiving care at VA centers nationwide. The VA expects to enroll one million veterans in the program over the next five to seven years, which will make this one of the largest such databases in the U.S. The data will be made available to VA researchers, federal health agencies, and U.S. universities for research projects that will look for patterns between specific genes and medical outcomes. Knowledge of which people are at greater risk for certain diseases might lead to more effective prevention, the VA suggests. The research could also produce treatments that are better targeted to an individual’s genetic makeup.

“Hopefully these new program announcements will spur the research,” Cunningham said. “We are encouraged by the increased number of applications, and we want to fund as much exciting new research for the benefit of our veterans as we can. I am hopeful that we will see some breakthroughs in the years to come.” For details on head injury, Aβ, and dementia, see Part 2.—Madolyn Bowman Rogers.